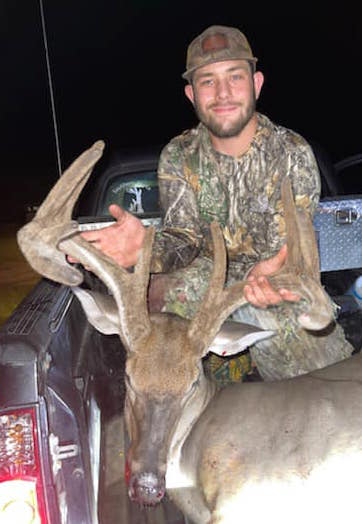 Garrett Webster of Chesterfield, S.C. killed a 10-point trophy buck in his home county on Sept. 1, 2021. An evening of patience paid off for the hunter.

The buck was in full velvet and had an impressive rack that’s been unofficially scored in the 140s. He’d never seen the deer before, not in the flesh are through trail cam photos.

Webster was hunting from an elevated stand on the edge of some woods when the deer showed up. It was 80 yards away when he shot it with his Thompson Center .308. The buck dropped on the spot, so no tracking was involved.

It wasn’t the first deer he saw that evening. Not by a long shot. But it’s the first one he raised his rifle for.

“It’s the biggest deer I’ve ever killed in velvet. I saw 16 deer in total that night. I let them all walk until I saw him at the very end of the hunt,” said Webster.

Webster is now entered in our Bag-A-Buck contest. Click here to enter your buck in the Carolina Sportsman Bag-A-Buck contest. We’re giving away some great monthly prizes, as well as a Grand Prize that includes a Millennium M25 hang-on deer stand and a 2-man, 2-day hunt for deer and hogs at Cherokee Run Hunting Lodge in Chesterfield, S.C.

Catching enough for a fish fry is not a problem for summertime anglers at Lake Monticello. […]

Ram vs deer: who wins?