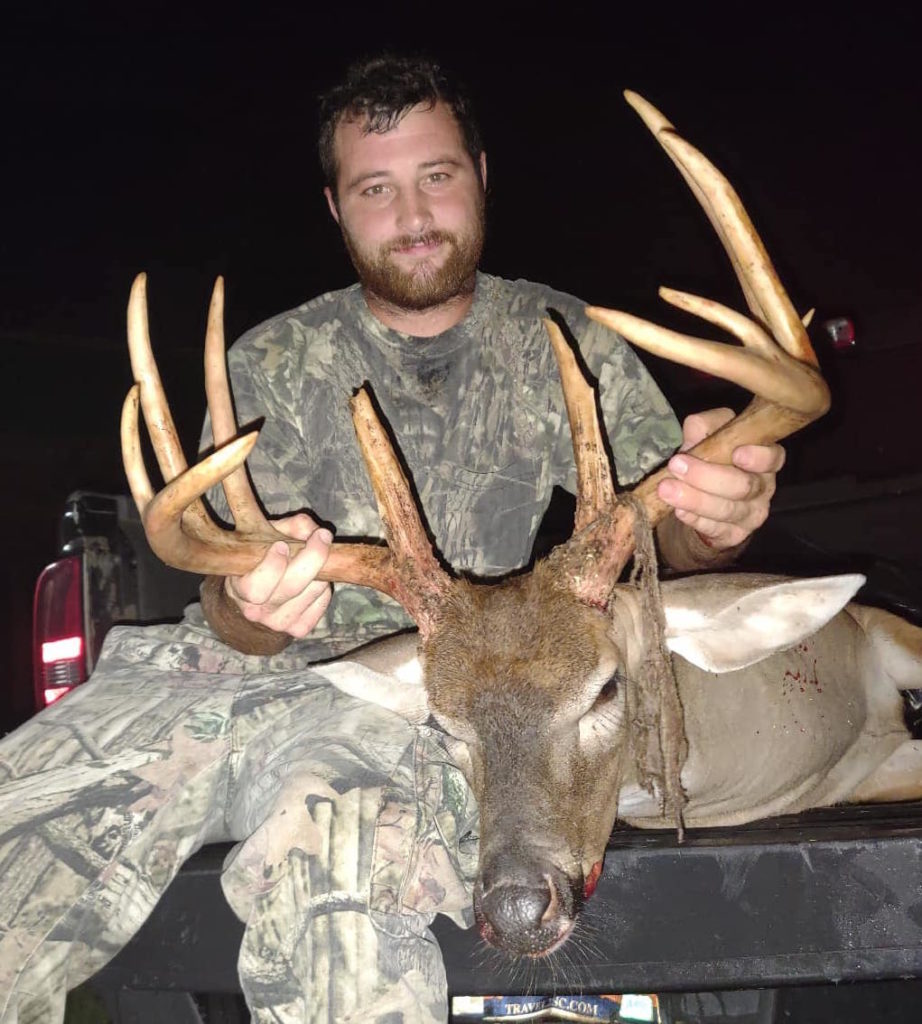 Hunter shot the 11-point buck from 60 yards away

Lance Hill of Sandy Run, S.C. killed a trophy 11-point buck in Calhoun County on Aug. 22, 2021 during a rainy evening hunt. He shot the deer with a Weatherby 7mm08 from a box blind about 20 feet high.

It was a deer he’d seen a few times, but never when he had a clean shot at it. It was either too dark to legally shoot, or he’d see it on the road while driving somewhere. He had no trail cam photos of the deer.

Hill’s granddad, Jimmy Hill had passed away a week earlier. And he choose his spot to hunt that day, which was a rainy day, based on some old advice from his granddad. And he said he felt his granddad’s presence throughout the hunt.

“Before the hunt, I was talking to my father and I asked him what granddad would do. He explained to me that on a rainy day like that day was, it was best to go sit beside a pond. It rained all day so I knew the perfect spot!” he said.

Hill hunted in a 1/2-acre unplanted field with a corn pile near the pond.

“So I went hunting and I could feel such a spirit in the air like something was there with me in the stand. I felt that presence the whole time,” he said.

Something spooks the does

“They fed probably about 20 minutes with no pressure, and about 7:50, they started to act weird and kind of spooked. I was thinking there’s no way I spooked them. I was being so still and calm. Then I heard a ‘crunch, crunch’ and I saw two bucks come out on the other side of the field from the does. That was the same side I was on, so they were about 15 yards away when they came out,” he said.

It was a nice 8-point buck and a smaller 4-point buck. Hill was pondering whether to shoot the 8-pointer as the daylight began to dwindle. But something else made the decision for him.

“Out of nowhere, this majestic 11-point buck comes barging out of the woods like he owned the place. If you’ve ever been in a stand and you’ve had to get yourself together because your heart is on the floor, then you know what I was going through,” Hill said.

Hill credits his granddad for the hunt

The hunter was excited, and tried to calm his nerves enough to get a clean shot at the buck that had eluded him up until that day.

“My heart was pounding so hard looking at this deer. I tried to get enough nerve and calmness to shoot. But it took me three times to finally calm down enough to get a semi not-rushed shot because it never stopped walking,” he said.

Hill pulled the trigger as the 11-point buck was quartering away from him at about 60 yards. The deer bolted, falling after running about 50 yards.

“After I shot him and the crickets started to chirp again, I just sat there for like 5 minutes of silence, just thinking in my head, knowing that my granddaddy brought me that deer,” he said.

Then it was time to find the buck, which didn’t take too long.

“It was an easy track, other than the water moccasin-infested woods and water we had to go through. But it was worth it. I want to thank my granddaddy for watching over all my family now from above. Love you pops,” said Hill

Hill is now entered in our Bag-A-Buck contest. Click here to enter your buck in the Carolina Sportsman Bag-A-Buck contest. We’re giving away some great monthly prizes, as well as a Grand Prize that includes a Millennium M25 hang-on deer stand and a 2-man, 2-day hunt for deer and hogs at Cherokee Run Hunting Lodge in Chesterfield, S.C.

Eleven-year-old Owen Grubbs was hunting with his mom on a dog drive in Orangeburg County, S.C. when he killed a 9-point trophy buck. […]

The late summer “temperature-oxygen squeeze” is killing some striped bass at Lake Murray. The phenomenon happens often this time of year. […]