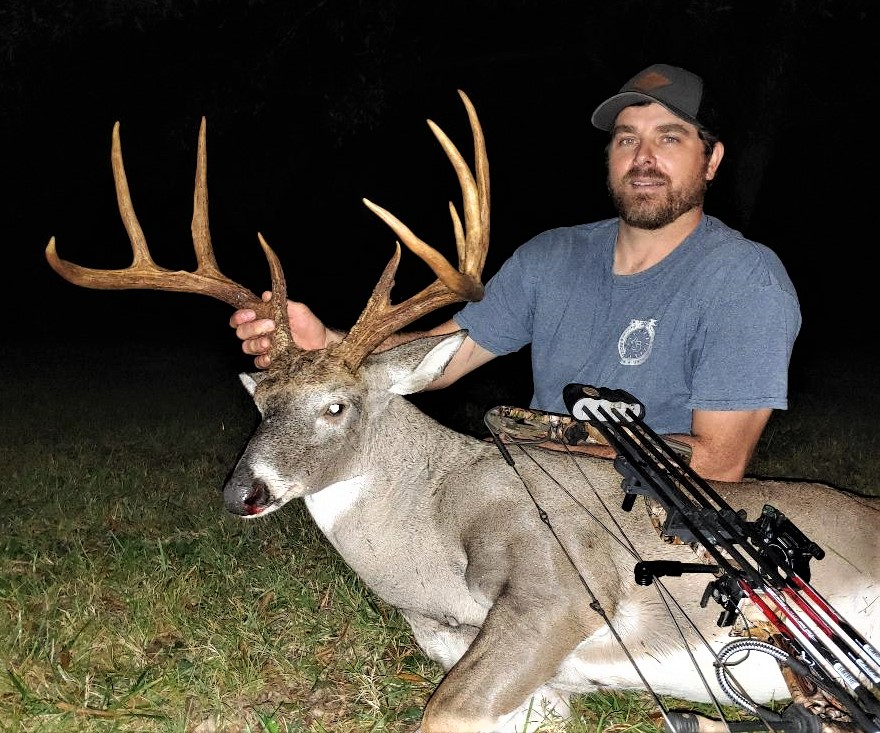 9-point buck was lured in by a mock scrape

Don Hawkins of Greensboro, N.C. believes in getting as close as possible to whitetail bucks. But he almost was too close Oct. 5, 2021 when he stuck a trophy Rockingham County 9-pointer.

That day the Michigan transplant used a nearly vertical bow shot to drill the 9-pointer that sported a 155 1/8-inch gross-score antler rack.

“I was hunting next to an older gentleman who gave me permission to hunt his land,” said the project manager for Wolfe Custom Homes. “After I set trail cameras in July, this buck was the first to show up.”

However, the whitetail soon displayed a wanderlust nature.

“He disappeared off cameras after Aug. 18, started moving around,” Hawkins said.

He relocated his trail-cams in September, and got 15 images a half-mile away. But 12 days later the deer changed its address again.

Tired of that game, Hawkins decided to gamble.

“I found a thick cutover that skirted a swamp with an oak flat in between,” he said. “(The flat) seemed like a perfect place to create a mock scrape.”

He set the faux scrape in the oaks Sept. 27, two miles from the buck’s original core hangout.

“It seemed like a good transition area,” he said.

On Sunday (Sept. 30), the camera transmitted the buck’s image.

The buck noticed the mock scrape

He couldn’t hunt Oct. 3 and 4 because of a business meeting and work. And he planned an Oct 5 dinner with his girlfriend. But his trail-camera sent pictures at 8:30 a.m. of the buck “destroying” the scrape.

“When he stopped, I could tell he was going to his bedding area, so I called my girlfriend and hoped she’d understand why I had to postpone,” Hawkins said.

Toting an Old Man climbing stand, he hustled to reach the oak flat around 5:30 p.m.

“A small six-pointer was with him,” Hawkins said. “I hadn’t put out any corn; I didn’t have time. The only (aids) I used were Ozonics and EverCalm.”

He’s killed several bucks, including a 10- and 11-pointer, by using the air-purifier at stands. Hawkins combines Ozonics with EverCalm deer scent he rubs on tree limbs near scrapes or corn. The only problem this day was this buck headed straight for the scrape behind his tree.

But as Hawkins pulled back his Elite Tempo bow string, the arrow fell off the rest.

“It was the first time I’d ever drawn my bow that the arrow fell off (the rest),” Hawkins said. “What saved me was the vanes caught on the rest and stopped the arrow from falling to the ground.

“I had to pull the bow back inside (his metal stand’s arm rests), redraw and shoot down.”

The buck was nearly beneath his tree, six steps away, when Hawkins, 25 feet off the ground, touched the release.

The Carbon Express arrow tipped by a 100-grain G5 MegaMeat mechanical broadhead hit between the deer’s shoulder blades and spine.

The buck, which Hawkins had named “49er” (in honor of his daughter, a UNCC student), was knocked to its knees, crawled five feet then expired.

Congratulations to Hawkins, who is now entered in our Bag-A-Buck contest. Click here to enter your buck in the Carolina Sportsman Bag-A-Buck contest. We’re giving away some great monthly prizes, as well as a Grand Prize that includes a Millennium M25 hang-on deer stand and a 2-man, 2-day hunt for deer and hogs at Cherokee Run Hunting Lodge in Chesterfield, S.C.

Anglers can expect to catch lots of bass at Hyco Lake throughout June. […]