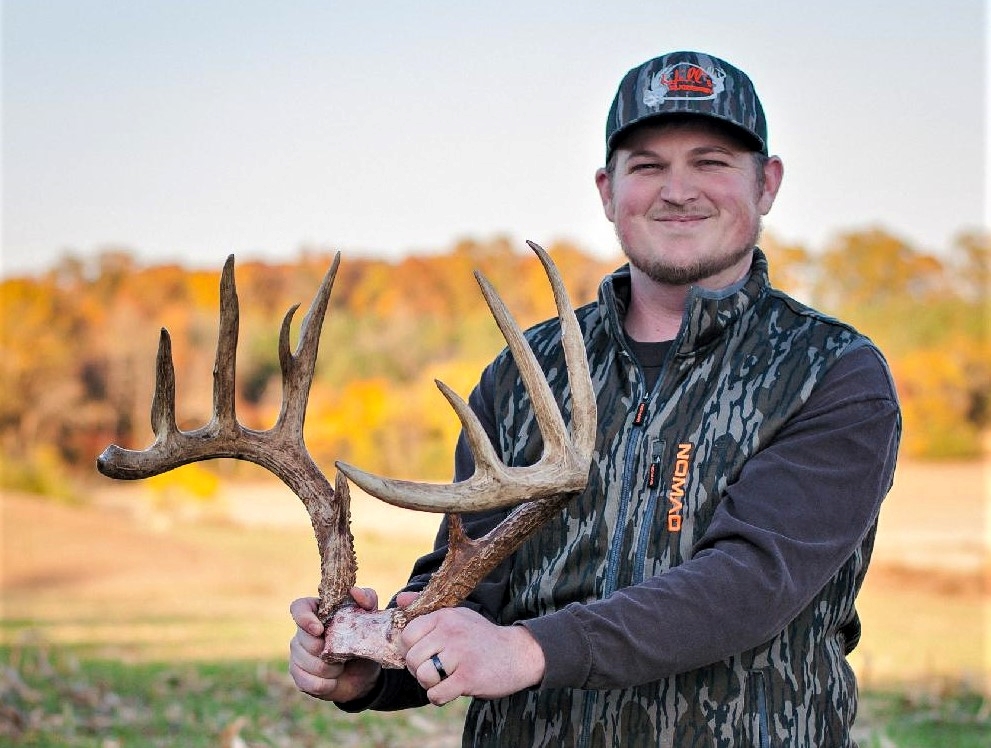 Mainframe 5×5 buck was devoured by coyotes

Brad Edwards of Fountain Hill, N.C. fattened up the hungriest whitetail buck in Anson County this fall. But coyotes reaped the benefit — except for a massive rack that’s been gross-scored at 155 2/8 inches.

He shot the deer Nov. 6 after a tip from his father-in-law and then watching it for a month. But Edwards later didn’t know if he’d lay eyes on any trace of it.

When his father-in-law leased a new tract, Edwards and his brother-in-law scouted the place, finding telltale signs of deer. So he put up a 15-foot ladder stand, scattered corn 60 yards away and set up two Bushnell cellular trail cameras. Soon, he had multiple deer images.

Three days later, all the corn was gone. So they spread more out.

From mid-October, his cameras revealed groups of deer — and one large-racked buck — visited the site regularly.

Edwards waited for muzzleloader season while burning through 200 pounds of kernels. Luckily, the buck began visiting during daylight hours.

“I got on my knees and prayed, ‘Lord, let me have a good, safe hunt. And if You let me see him, let me shoot straight,’” he said.

The big buck shows up

At daybreak, while watching two small bucks mock fighting at the corn, Edwards heard a deer circling 50 yards downwind from his stand.

“Then it turned and headed toward the corn,” he said. “I heard him grunt twice.”

When the buck stepped into the open, Edwards looked through his Nikon Omega scope and settled the crosshairs on the deer’s right shoulder. When he pulled the trigger of his Thompson Center Encore .50-caliber muzzleloader, smoke billowed. He lost sight of the animal.

“But I thought I might have seen the buck hunch up and turn,” he said.

His rifle was loaded with two 60-grain Triple 7 blackpowder pellets and a Thompson Super Glide 250-grain bullet. He’d used the gun since he was 10-years-old.

The buck stayed elusive, even in death

Finding no signs of a hit on the ground, he formed a five-man search party. They searched fruitlessly until dark. Then Edwards returned Sunday but found nothing.

A new work week began. But the hunter was convinced his shot had been true.

Edwards returned Thursday, Nov. 11 with another load of corn.

“I decided to sit in the stand and think. Then I saw and heard buzzards flying about 100 yards from the stand,” he said. “I walked there, found a pile of bones left by coyotes and buzzards and saw the rack sticking up. I”d walked by and around him four or five times when I was looking for him.”

Edwards said he got on his knees and “bawled loud enough for anyone to hear me. And I was thankful my dad and Grandpa had started taking me hunting when I was 3-years-old.”

Congratulations to Edwards, who is now entered in our Bag-A-Buck contest. Click here to enter your buck in the Carolina Sportsman Bag-A-Buck contest. We’re giving away some great monthly prizes, as well as a Grand Prize that includes a Millennium M25 hang-on deer stand and a 2-man, 2-day hunt for deer and hogs at Cherokee Run Hunting Lodge in Chesterfield, S.C.

taylorl1984 Bag a Buck, Deer of the Year

Kris Oakley scored this giant 14-point beast on opening day of muzzleloader season out of Caswell County, N.C. What a way to start the season! […]

Took my buddy hunting with me and my son and was glad to be a part of him getting his biggest buck. Thanks, Michael Tyson. […]