Pier fishing along the Carolinas’ coast provide tremendous opportunities, especially in the fall when fish are migrating up and down the beaches.

The Carolinas’ coast offers fantastic views of the Atlantic Ocean and some of the best fishing anywhere along the eastern seaboard. And that’s tru from backwaters to bluewater offshore grounds.

Anglers have plenty of opportunities along its reaches. And while many attack their finned foe above the waterline in a boat or from shore, the dozens of public piers along the shorelines position anglers for success for much of the year.

And the fall fishing season would not be complete without a trip to one of the many goliath structures scattered along the shorelines. 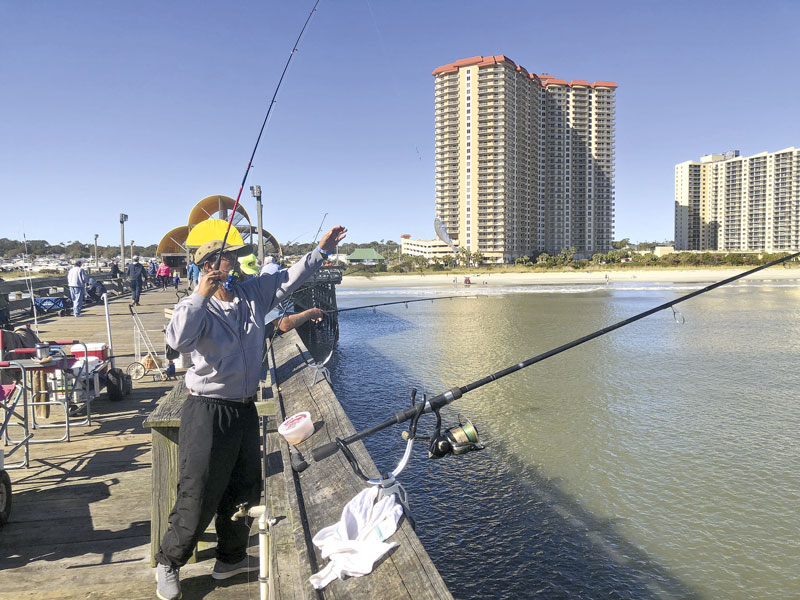 Beginning in the northeastern corner of North Carolina is the 696-foot Avalon pier, protruding from the Outer Banks, running south to the 1,120-foot Hunting Island State Park pier that juts out in to Fripp Inlet between Fripp Island and Hunting Island, S.C., the 487 miles of shoreline features two dozen piers open to the public.

For many, the sight of wooden railings and familiar smell of sea spray along piers jostles childhood memories. For nearly a century, people have ventured to the coast to spend the day targeting finned delicacies to take home to the frying pan. In 1923, the first ocean pier in the Carolinas was constructed in Kure Beach, a small, beachfront community south of Wilmington, N.C., between Carolina Beach and Fort Fisher.

Piers have always provided entertainment for a wide variety of patrons. Aside from game rooms, short-order grills and guests soaking up rays, the fishing opportunities, without much question, are the major draw. And they should be. The fishing can be phenomenal along these colossal structures 20 feet or so over the water line.

From the foamy suds along the beach to the pier’s terminus in deeper water, piers offer anglers ample opportunities to catch drum, trout, pompano, flounder, whiting and spots, plus king mackerel, Spanish mackerel, cobia and even gigantic tarpon that can be much heavier than 100 pounds.

Anglers choose their position along the pier based on what they intend on catching.

From the shallow shoreline in the salty suds for most of the pier’s length, light-tackle anglers monopolize these areas with lures, cut bait and some live bait, targeting just about anything and everything that swims. The end of the pier is basically reserved for the diehard pier goers targeting king mackerel. They are some of the most-dedicated anglers around. They set up at dawn, often fishing until sundown in hopes of landing a respectable king for the ride back home.

One such angler is Chris Ott of Conway, S.C., a regular on the Apache Pier in Myrtle Beach, S.C. He usually camps out at the end of the pier, in king mackerel territory. And he catches freezers full of king mackerel each year.

“I have been fishing Apache for six years now. It’s one of the only piers you can still fish for kings on, and it’s a good one too,” Ott said. “In the last two years, we have caught more than 300 kings off Apache.” 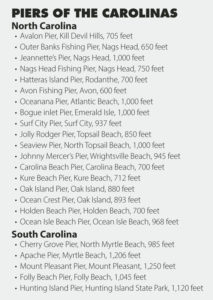 Ott utilizes the typical two-rod set up, one serving as a stationary, anchor line, and the second with a live bait hooked up, resting just at or below the water’s surface. A live mullet, menhaden, bluefish or any other live baitfish can be deadly off the end of these piers. And throughout the year, Ott catches all kinds of species using this live-baiting technique.

The fall is prime king time for pier fishing

Ott spends most of his free time year-round on the pier. But his favorite times are spring and fall.

“The fall run in September through October can be epic for kings,” Ott said.

The Apache Pier is one of the longest in the Carolina fleet of piers spanning 1,206 feet into the Atlantic Ocean. According to Ott, the length of the pier makes a difference. It allows fishermen to move farther from shore and over deeper water.

But the nearshore pier sections can offer anglers a wide range of species. Glenn Cannady of Goldsboro, N.C. has been visiting Apache Pier routinely for the past 20 years. The king mackerel fishing at the end does not interest him. He fishes from the shoreline about 600 feet oceanward and brings fish home in his cooler on every trip. Flounder, whiting, weakfish, drum and spots make up the majority of his catch. His favorite seasons on the pier are the spring and fall.

Bait choices can vary depending on what is running. But cut shrimp, bloodworms and live minnows always make good choices. Cannady prefers artificial bloodworms when spot season is in.

“There is no need to use bloodworms in the fall. Because the artificial bloodworms work well when the spots and whiting show up thick,” he said.

Other artificial options can also bring meat to the hill, too. Casting spoons and jigs can be excellent options for catching a multi-species bag for most of the fishing season. The nearshore waters along and near the surf zone corral baitfish and make a perfect scenario for feeding predators.

The Apache Pier is one of the most-visited piers in Myrtle Beach due to the popularity of the campground, amenities, the friendly staff, its width and the fishing opportunities. But lots of piers along the coasts of the two states can bring success as well. Almost all piers will produce spectacular fishing during at least one point of the season due to the migration of species. In the fall and spring, many fish are traveling along the shore and will intercept the piers along their migratory route.

But the piers, and the habitat the piers are built over, are not created equal, either. Most piers range in length from 600 to over 1,000 feet. But the overall length does not always correlate to better fishing, especially when half the anglers are corralled in the first 200 feet from the surf zone. The variability in habitat is typically greater towards shore than near the end. The combination of sandbars and sloughs near the beach corrals schools of fish that can make certain sections better than others. And some piers will span areas with some hardbottom that can congregate baitfish.

Even the structures of the piers attract fish

Any type of irregular bottom features can be beneficial for anglers. And anglers should not ignore the pilings, either. The area under the pier can offer prime real estate to catch a wide variety of fish, including speckled trout, red drum, black drum, flounder and sheepshead.

Pier fishing is one of the time-honored traditions for Carolinians and the fall season is one of the best times of the year to visit right when the fall migration is within full motion. As fish encounter the pier on their southern migratory path, the hundreds of hooks covered with tasty offerings leave little to desire.

Look for huge reds when pier fishing in the fall

During fall, saltwater fish are steadily moving somewhere with the tide and currents. But they are also well known for migrating from offshore to nearshore and from north to south or south to north as the seasons change.

One of the most-popular sights during the fall is the traditional redfish run. And piers scattered up and down the coastline are prime places to encounter one of these bronzed beauties.

Phil and Lorraine Blue of Pleasant Garden, N.C., come to Cherry Grove, S.C., every year to fish on the pier. And they absolutely love the fall fishing season. Of course, that’s when the big redfish show up in the nearshore ocean, well within reach of their fishing gear.

“We start fishing in September and fish several weekends into the fall season,” Phil Blue said. “It gets real exciting when a school of the big reds shows up in our lines.”

Blue will fish near the end of the pier with fresh cut mullet, bluefish, or whatever he can catch for bait on a hook or with cast net.

Big reds show up in schools and will quickly terrorize a set of lines, giving anglers the fight of their lives from 20 feet above.

While these big redfish are quite fun to catch, many are oversized and too big to keep. Blue takes special care of these fish and gets them back in the water, sending them on their way.

One specialized piece of equipment that is seen on fishing piers — but few other places — is a pier net.

A metal hoop, typically 2 to 3 feet in diameter, with a long, mesh net attached, a pier net is lowered into the water by three sections of rope tied to different parts of the hoop.

When a big fish is brought to the surface by a pier angler — a fish too big to reel up the 20-plus feet to the pier’s deck — a net is lowered several inches below the surface, and the angler guides the fish above the net’s opening. A second fisherman, holding the rope, can then raise the net, trapping the fish so it can be raised hand-over-hand to the pier’s deck.

Many piers supply nets for anglers who hook big flounder, bluefish, redfish and mackerel. And many serious fishermen bring their own.

Avoid these mistakes when dropshotting for bass

Pro angler Brian Latimer shares his tips on common mistakes to avoid when dropshotting for bass. […]

Flounder season ends for NC anglers on Sept. 30, but that’s not slowing down the bite one bit. […]

About Jeff Burleson 1410 Articles
Jeff Burleson is a native of Lumberton, N.C., who lives in Myrtle Beach, S.C. He graduated from N.C. State University with a degree in fisheries and wildlife sciences and is a certified biologist and professional forester for Southern Palmetto Environmental Consulting.