There are good tides for catching speckled seatrout in the Carolinas, and there are better stages of the tide, so anglers with flexible schedules naturally focus on the best times. But as a fishing sage once said, “The best time to go fishing is when you have time to go fishing.”

Guides in South Carolina’s Lowcountry know the best stages of the tide and the best spots for catching speckled trout and redfish, but they often need to go when their clients are free, so they must find fish at all stages of tides or end up with unhappy fishermen in the boat. The techniques the pros use during those not-so-good tides will improve your fishing, too.

Almost all Lowcountry guides with paying clients focus on red drum, aka spot-tails, and most action on trout is incidental or self guided. But trout in autumn can be very easy, and almost anybody can catch a few when the water is just approaching or just leaving the grass.

Tim Carver, a guide based in Beaufort, S.C., who can find spot-tails with the best of them, actually spends lots of his time in the autumn targeting trout because they are fun and, at times challenging, especially the big “gator” trout — plus very good eating. He employs the standard jighead and soft-plastic trailers for proficient casters or a live shrimp hung below a popping cork for those less adept when conditions are easy.

But anglers need and want to know how to catch trout at other times of the tide, such as when all you see are sand bars and oyster outcroppings sitting high and dry, many yards from the water or when the high tide has all the grass edges flooded 6 feet deep. It’s more difficult then.

To find fish on low water, Carver looks to the mouth of large creeks that hold water even at dead-low tide. Sometimes, rock piles or other structure are in the deep water near the main channel. He casts along the drop-offs in the creeks and main channel with a Bass Assassin Sea Shad in his favorite color, 10W40/limetreuse tail, on an 1/8-ounce jighead so it falls slowly. He likes the jighead to be black or red rather than chartreuse so the fish focus on the lime tail.

His other technique for shallow, low-tide situations is casting a suspending MirrODine 17MR lipless hard lure in the 808 color. Though called a suspending twitch bait, this lure actually sinks slowly and darts from side to side when twitched. He makes long casts into shallower water along the drop-offs and retrieves with a twitch-twitch-pause action through the strike zone.

Carver agrees with most trout fishermen that mid-tide on rising water is the most-ideal trout time, and he’ll work the standard hot spots and lure selections. In November, speckled trout are schooled up, moving around with the tide, and are most-often found feeding along grass edges, over-flooded oyster outcroppings  and around creek mouths large and small. Top techniques are casting jigs near oysters on points, standalone oyster bars with current, upcurrent and downcurrent sides of creek mouths and grass-line edges, especially where oysters break the current flow. A crucial point to remember is that trout are sight-feeders and like clear water, so if the water is clouded by mud or silt, find another spot; trout will not likely be there.

Learn to identify all different types of lines: tide lines, eddy lines, grass lines, shorelines and current lines and, whenever possible, fish a line. Carver generally does not use live bait, but for those who do, floating a shrimp in these same hot locations will be just as effective.

As the tide approaches high, finding fish is more challenging.  Carver switches to a full-sinking MirrOlure 18MR, called the “Heavy Dine,” and casts around the edges of smaller creeks that were dry at low tide. He uses the same twitch-twitch-pause retrieve cadence on these deeper presentations. He also looks for cut-back areas along grass lines where the edge forms a small pocket. High tide also is ideal for walk-the-dog presentations with topwater plugs that sometimes generate impressive surface strikes from big trout. Most effective in early or late, low-light periods, Carver’s current favorite plug is the Rapala Skitter Walk in bone color.

For those without access to a boat, you definitely can catch trout from shorelines, public piers or boat landings where fishing is permitted. Remember, when you fish at public boat ramps, the people launching or loading their boats have priority but everybody is normally cordial.

According to Joey Ballenger of the S.C. Department of Natural Resources’ Marine Division, stocks of speckled trout are in good shape since we have not had a cold winter in several years.

Anglers should see plenty of 18- to 20-inch, solid keepers, along with some big gators.  Keep a few if you like fresh fish, but release the rest to fight again.

Trout on a fly rod

Though most anglers who target speckled trout fish conventional tackle with lures or live bait, fly fishermen, especially those accustomed to plying smaller, sweet-water venues, can have a blast with a fly rod while avoiding the sight-fishing frustrations of long, quick casts in the wind.

During November — in fact, through the entire fall, from October through when the shrimp and small baitfish vacate the creeks in late December — trout tend to move and feed in schools as they fatten up. A good plan is to prospect with a spinning rod and jighead with a Gulp or plastic trailer until you find fish, then switch to the fly. Purists can go all the way with the fly, but experience suggests the soft-plastic trailer’s action will often find fish faster.

When you switch to the fly rod, an ideal setup would be a 9-foot, 6-weight rod loaded with a 200- or 250-grain sinking, shooting-head line such as the Orvis Pro Depth Charge. Use a simple, 4-foot leader made of 20-pound fluorocarbon, because you want the sinking line to drag the fly deep; a long leader will allow a lighter fly remain too close to the surface.

Pick a good-sized, brightly colored fly, maybe in the popular electric chicken combination of chartreuse and pink, in a size 1/0 with a bead-chain eye or light dumbbell. You want the fly to sink, but not faster than the line, as the line quickly moves the fly into the typical strike zone of a foot or more below the surface and keeps it there as you retrieve it back to the boat. Make casts into the shallows and retrieve fairly quickly. Some fish may strike from very shallow water, but most will hits occur in 2- to 4-foot depths.

Casting a sinking, shooting-head line requires a slightly different casting stroke, but it’s not hard to pick up, and landing good-sized speckled trout on a 6-weight is definitely fun. 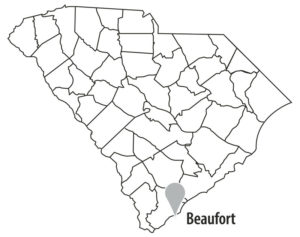 HOW TO GET THERE — South of the Broad River, anglers have good access at the Chechessee River Landing or the Broad River Landing, both on SC 170. Beaufort anglers have easy access from the landing on Lady’s Island and down Sam’s Point Road. Eddings Point Landing on St. Helena Island and Station Creek Landing are also good. Many other free public landing options are available.

WHEN TO GO — Trout are very active from October into December. The top half of the tide, either rising or falling, is often considered most productive.

Raven Ginn Polk of Cummings, S.C. killed a big 12-point Hampton County buck on the evening of Sept. 25 while hunting from a tripod stand. […]

Bass fishermen who frequent Lake Norman’s 32,500 acres in North Carolina’s Foothills might notice something a little different about the largemouth bass they catch a few years down the road. […]

Gavin Matthews with a nice speckled trout he caught on a shrimp while fishing under the Blue Bridge in Charleston, SC.