The wind chill was around freezing, but the winter sun was shining as Noah Lynk cruised across Back Sound from Harkers Island to Cape Lookout. On the second day of a light winter nor’easter, locally called a “mullet blow,” Lynk was taking a group of hardy fishermen to the shoals off Cape Lookout in search of redfish.

They beached the boat on the lee side of one of the exposed shoals and walked across to fish the rough water on the windward side. The weather was stable and the barometer rising a bit. Lynk believed reds would be shaking off the cold and scouring the sandy points of the exposed shoals in search of food. 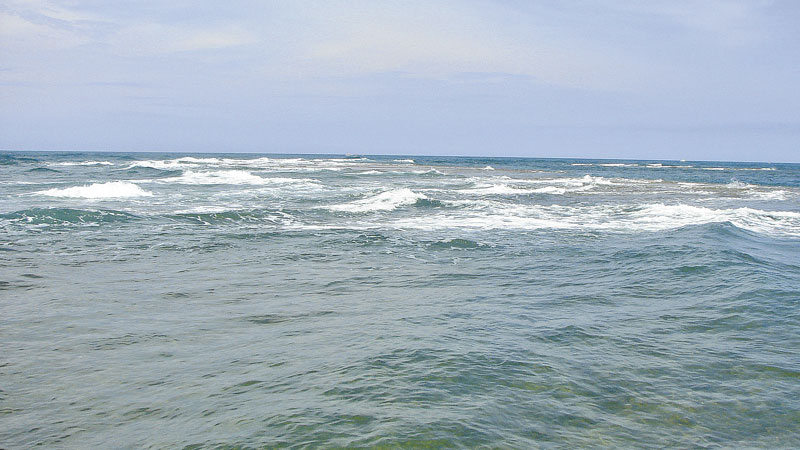 “This fishing seems to be best when the wind is from the northeast. That also makes it the easiest and most comfortable,” said Lynk, who operates Noah’s Ark Fishing Charters out of Harkers Island. “We can run down the beach from Bardens Inlet to the shoals and be in calm water all the way. Once we reach the shoals, I look for a point with plenty of wave action. Then we beach the boat on the calm side and walk over to fish the rough side.”

Lynk said big drum feed in the turbulent water where crashing waves stir up the bottom and expose whatever is there to the feeding drum.

Some days, he said the action might only be 20 yards off the sand. And on others, it is as far as you can cast, even wading out as far as is safe. The best action is often on days when the waves are really crashing,. So beaching the boat and hiking across the exposed shoal and casting while wading is the only option that works. The waves are often coming from different directions, so waders must exercise caution.

“The fishing is simple,” Lynk said. “You cast as far as you can out into the stirred-up waves off the point and retrieve the lure. I usually begin with a slow, steady retrieve that lets me feel the lure tapping the bottom occasionally. If this doesn’t draw strikes, I speed the retrieve up a little, then add some jigging motion. Sometimes, it’s more of a jigging motion, only reeling to keep the line tight. It might take a few casts to find what they like that day. But these drum are usually feeding. And when you find a school, there will be a retrieve motion and speed they like.

“We use longer rods and heavier jigs to get maximum casting distance,” Lynk said. Most of the time, we’re casting into the wind, and it can be stiff. Even using these ounce-and-a-half and heavier jigs, it’s sometimes all you can do to reach where they’re feeding. The extra weight also helps the lure stabilize in the rough and swirling water. Some days, the weather is nice, and the winds are light. But many days it’s rough and windy — and they can be good fishing days, too.

“There won’t be any question when one hits,” Lynk said. “They are in shallow, turbulent water, and (they) hit hard. They’ve got tough mouths, so you need to set the hook firmly. But they’ll be helping as they burn line off the reel heading back to deeper water. They might not fight as hard as they do when the water is 75 degrees, but they represent themselves well. You’ll be arm-tired and smiling when you release one.”

Lynk said he sometimes has to move a few times to find a school, or if the school he is fishing moves because of a tide change. He said fishing is very tide-dependent for both depth and moving water. This can be exaggerated at times, as sometimes there are extreme winter tides around the shoals.

Lynk prefers to concentrate on the rising tide but has had excellent catches on the falling tide. He concentrates on the rough points where waves are crashing but always searches the water around him for signs of fish. Occasionally, a red tint in the water or hovering birds gives away the location of a school. You have to be paying attention to take advantage.

Occasionally, Lynk said, he takes a fisherman who isn’t a good caster or just prefers to fish bait. As odd as it may seem, Lynk said that while these fish will hit pieces of cut mullet or menhaden, they aren’t as aggressive as they are with moving lures. He estimated that bait gets roughly half (or less) the strikes as lures.

“While cleaning fish in the past, I noticed that many of these fish had bellies full of tiny sand fleas,” Lynk said. “Most are very small, with the larger ones being about half the size of the nail on the little finger. The past few winters, we have occasionally impaled some of these on hooks while fishing. This has to be what the drum are coming to the shoals to eat during the winter. I didn’t know when or where sand fleas spawned, but this might be it.”

The fish Lynk and his clients catch at the shoals range from upper-slot fish to some in the lower 30-inch range. He estimates they are 3 to 5 years old and spending their first to third winters in the ocean. Sometimes, a really big fish— 40 inches or better — crashes the action and earns a fisherman a release citation from the N.C. Division of Marine Fisheries. Another occasional surprise is big speckled trout. Lynk said they don’t catch a lot of trout. But when they do, it’s usually a photo-worthy fish.

“You are sort of on your own when doing this, so preparing properly and being safe is of the utmost importance,” Lynk said. “The shoals may shift often. But local knowledge of longstanding sloughs and places to safely navigate helps greatly. Carrying extra clothes, including a full set of dry clothes, ranges from a good idea to a potential lifesaver. Getting wet is bone numbing and can bring on hypothermia and worse if you can’t get warm and dry.”

Funny occurrences during summer can be potentially deadly in winter

A motor that won’t start or run means longer exposure to the cold at best, and can become life threatening at its worst. Running aground can delay a trip, and not everyone has the experience to run in this area after dark. Lynk said leaving a float plan with someone is critical. And he always takes enough extra food to handle being stranded overnight. There aren’t a lot of fishermen around to lend a helping hand in January.

Lynk said the object and reward of making a trip like this is a day of exciting fishing. And it happens with amazing regularity. However, he cautions anyone that attempts it on their own to be properly prepared.

Cape Lookout Shoals runs from the point at Cape Lookout offshore for about 9 miles. At times the shoals are narrow, with a maximum width of about 2 miles. Cape Lookout National Seashore ends 10 miles to the west at Beaufort Inlet.

The dangers of Cape Lookout Shoals were well known even to early sailors. The combination of shoals, shallow water and swift currents that constantly shift the shoals, and the tendency for rapidly developing and severe storms make this area particularly dangerous. A lighthouse has stood at the Cape since 1812. And well into the 1900s, a lightship was anchored offshore from the end of the shoals.

The same features that make Cape Lookout Shoals dangerous for navigation make it a haven for fish. The variety of fish that at least temporarily call Cape Lookout Shoals home at various times of the year is large. The shoals, shallow water and swirling currents trap and disorient baitfish and make them easy prey for larger predators. The water is typically warm from spring to fall and only occasionally cools below the mid-50s during the winter. Red drum like shoals for a winter location.

WHEN TO GO — Red drum live around Cape Lookout most of the year, and larger ones take up residence around the shallow shoals as the water begins to cool after Thanksgiving. They roam this area throughout the winter, feeding on baitfish, crabs and other food uncovered by the waves and pushed through the area by the tides and currents.

BEST TECHNIQUES — Find a shoal, beach your boat on the lee side and wade to the windward side to casting lures such as a Clark Spoon 11/2-ounce Shad jig, Halco C-Gar 120 and Halco Slidog 125. Big drum aren’t as rambunctious in the colder water, so using lighter tackle is an available option. Star spinning rods in 71/2- and 8-foot lengths and 3000 to 4000 class Kunnan reels spooled with 12-pound Fins braid and a short leader of 30-pound fluorocarbon. The combination allows for good casting distance and accuracy and has enough backbone to land larger fish.

ACCOMMODATIONS — Cape Pointe Marina (www.capepointemarina.com) has RV sites, and Harkers Island Fishing Center (www.harkersmarina.com) has a small motel. Both have ramps and dockage. Rental condos and cottages are available on Harkers Island. The closest chain motels are in Beaufort, Morehead City and Atlantic Beach. Contact the Crystal Coast Tourism authority (www.crystalcoastnc.org), 800-786-6962 for information.

Paddling the tides for tailing redfish

August can be a tough month for a lot of inshore species due to high water temperatures, but it also offers some great opportunities to sight-fish for redfish in a lot of areas across the Carolinas.  […]

Numerous Carolina inlets feature rock jetties that are magnets for a huge variety of fish during the hot summer months. […]

About Jerry Dilsaver 1179 Articles
Jerry Dilsaver of Oak Island, N.C., a full-time freelance writer, is a columnist for Carolina Sportsman. He is a former SKA National Champion and USAA Angler of the Year.