The flow of the Cape Fear River gives inshore waters around it new life during the heat of the summer. Here’s how a retired guide catches redfish and speckled trout. 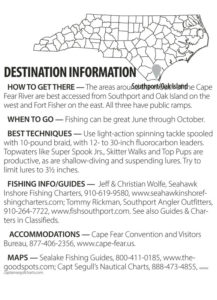 With its energy-sapping heat, July along North Carolina’s coast isn’t the best time to fish for inshore species.

Blistering sunlight heats shallow, inside waters and reduces areas where some gamefish species were plentiful only months earlier. But some areas notable exceptions.

Areas of the coast around inlets receive doses of cool seawater twice a day during tide changes. Nearby shallow habitats get refreshing baths of this water. And this refreshment activates the fishing.

The bigger the inlet, the more water that flows through it. This spreading rising tides onto nearby flats, marshes and creeks and moving pods of baitfish past hungry gamefish. When the tide turns, baitfish are pulled toward the ocean.

The area of North Carolina where this phenomenon affects the most water is the lower end of the Cape Fear River and the inlet where it connects to the Atlantic Ocean. Millions of gallons of moving water enhance baitfish movements and activate gamefish’s feeding instincts.

Cape Fear has a wide maw

The Shallotte, Lockwood Folly, New and White Oak rivers empty directly into the Atlantic. And several other rivers empty into sounds behind barrier islands. But they’re all mere creeks compared to the Cape Fear’s 1 ½-mile-wide maw between Oak Island and Bald Head Island.

Just inshore of the river’s mouth, thousands of marsh, islands and tidal-creek acres, plus the Intracoastal Waterway, spread across the landscape.

Butch Foster, 69, was a guide who, until recently, fished the lower Cape Fear after a long career fishing offshore. He retired early this past May.

“One thing that’s hard to admit is you’ve passed the prime of your life, and it’s time to retire from the work you’ve spent the best years of your life,” said Foster. The Lexington, N.C., native spent his formative years in a local textile mill, usually vacationing in the Southport/Oak Island area with his wife, Barbara, and son, Chris. They loved to chase groupers, snappers, beeliners, grunts and other bottomfish. And they trolled for king and Spanish mackerel.

When Foster, a master machinist, invented and patented a knitting machine part, royalties financed a move to Southport and a new life. He bought a 34-foot Chris Craft, christened it the Yeah, Right and began to take friends offshore fishing. Later, tourists paid him to find boatloads of bottomfish.

“I like introducing young people to fishing,” he said. “It’s a hobby they can do their entire lives; the scenery is beautiful, and it’s better to be outdoors than inside, I believe.”

Foster’s Southport home was near waters he’d fished for years.

“It’s not like I was unfamiliar with backwaters around here,” he said. “When I was offshore fishing and we had bad weather, I’d take (clients) to backwater.”

He believes falling tides are best for skinny-water fishing.

“I think specks and reds orient toward current. But rising tides open up too much territory in the marshes and scatter fish. Incoming tides make them harder to find,” he said. “Falling tides pull baitfish out of the grass and move them down the sides of creeks and marsh islands. Specks and reds orient along marsh-island and creek edges.

“Once you locate fish, it’s pretty easy. It’s not unusual to find a stretch of productive shoreline. Then you anchor, use a trolling motor or drift and cover a lot of territory.”

Last July, Foster outfitted Steve Galagan of Concord, N.C., and his 7-year-old son, Keaton, to catch speckled trout and redfish. He had a baitwell filled with several dozen finger mullet for his novice clients.

One of Butch Foster’s favorite shallow-water areas for spotted seatrout and redfish includes the marsh and creeks of the Elizabeth River at Oak Island’s eastern edge, near the Cape Fear River.

“I like to let new clients drift finger mullet on floats near the edges of marsh islands during falling tides,” he said. “More skilled people can use soft-plastic (lures); both catch red drum.

“Across the Cape Fear River at Bald Head Island, I fish the shorelines of Bald Head, Cape and Cedar creeks.”

North of Bald Head Island, huge bays hold specks, red drum, black drum and sheepshead but are accessible mostly to shallow-draft boats and veteran guides who know sand bars, channels and when and how to get in and leave. Rapidly falling tides have grounded numerous unwary captains.

This area may be accessed a public boat ramp at Federal Point at the southern tip of US 421 near the Fort Fisher Ferry terminal. Because a rock jetty lines the river channel, boaters only can access First Bay (aka The Basin), Second Bay and Buzzard’s Bay from the Federal Point boat ramp, plus Zeke’s Island, No Name Island and North Island. Cedar Creek offers an entrance to these bays from the river’s side north of the Bald Head.

For an hour or so after first light, anglers often find large trout at the jetty rocks by casting topwater lures such as Skitter Walks, Super Spook Js., MirrOlure Top Pups, She Pups, 808 (black, gold, orange) MirrOlures, MirrOminnows and MirroDines.

The Lockwood Folly River at the western end of Oak Island also has many marsh-edge areas that hold trout.

While fishing on the Roanoke River earlier this year, Clark Purvis of Hobgood, NC caught a tagged striped bass that NCDMF said is 31-years-old. […]