It’s hard to describe the kayak-fishing phenomenon. Kayaks have been around for ages, but sometime during the last 20 years, the mentality of a lot of anglers shifted from fishing from powerboats to fishing from plastic paddle boats.

Even today, that shift has resulted in more availability of better products for anglers new to the sport. There has never be a better time to get started in kayak fishing than today for any species of fish you can imagine. However, with the boom, there’s also been a lot of overselling of what you need to get started. Below are some pretty basic, but pretty necessary items that will help you the most when starting in this sport.

A seeming no-brainer. With all the selection out there, the best advice for a kayak angler is to use rods long enough to let you reach around the boat from a seated position. The second-best advice is to go lighter than you think. The kayak becomes part of the reel’s drag system when fighting a fish. And this makes it harder to break off because the boat is never really stationary unless you’re on anchor. Doubt this? Try breaking off when you get hung up. Most times, you’ll pull the boat to the snag before the line breaks.

Remember this phrase: know what you’re going to throw before you go. Tackle storage capacity is limited, especially if you’re accustomed to fishing from a larger powerboat. Pare your tackle down to match what you expect to catch. You’ll soon discover that presentation of a bait is much more important than having a variety of colors, sizes, and styles of basically the same bait.

A paddle is necessary if you fish from a paddle boat, but it can also be useful from a pedal boat. Pick a lightweight paddle you can handle all day.

Paddles can get pricey. You don’t need to have one with a built-in measuring tape and hook-retrieval slot.

If you like to anchor, drift or troll with multiple rods, you’ll need rod holders. Once you lose one rod from just setting it down in the boat, you’ll wish you’d spent the money on rod holders.

Plastic varieties are the lightest and most versatile; they won’t rust or corrode like metal ones. If your boat has a track system built in, or you can add track, it’s worthwhile to remove, store and position rod holders rather than permanently screwing them to the deck or railings.

This breaks down into two parts: stake-out poles for fishing in rivers and shallow coastal areas and small anchors for use everywhere else. If you plan on fishing in current or wind, a trolley system lets you adjust your tie-off spot from a seated position in the boat. You can buy commercially made systems or make one yourself from parts available at any hardware store.

Without a doubt, sonar units are a valuable part of fishing, if not for marking fish but determining depth of water, presence of structure and baitfish, water temperature, etc. A sonar unit is probably an advanced piece of kayak gear. But suffice it to say, the kayak fishing market has paved the way for the availability of advanced sonar that’s easily installed, powered and used in a plastic paddle boat. 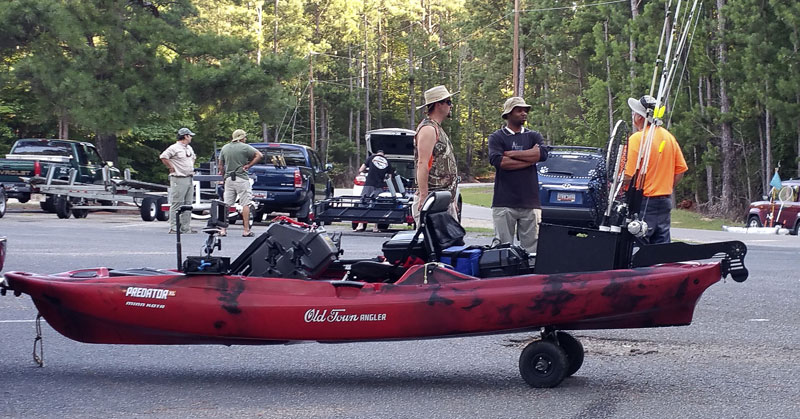 Whether you transport your kayak to the water on top of your car, in the bed of a pickup or on its own trailer, a kayak cart will be a lifesaver unless you intend to only launch at public boat launches where you can drive right up to the water’s edge. Dragging a kayak is an option, but that puts a lot of wear and tear on the boat. If you’re going down gated-off roads, through the woods, across a beach, through the neighbor’s back yard, or whatever, consider obtaining a cart. The one that fits in the scupper holes are much easier to maneuver in a straight line than those you simply strap to the hull.

There’s no research to prove it, but more kayak anglers use artificial baits than live baits. The major reason is that storage and weight capacity for keeping live bait is limited. Worms, crickets and dead cut bait isn’t nearly as big a problem as holding water to store live baits. Some anglers use troll buckets and hang them off the side of the kayak, but they soon realize the drag created by the bucket is prohibitive.

The same research, if it existed, would show most kayak anglers release their catch rather than keep it for the same reason that space and capacity are limited. And dragging it alongside the boat is more trouble than it’s worth. If you plan to use live aquatic baits and or keep some of your catch, plan accordingly when it comes to space and weight allowances on your kayak.

Truer words were never spoken. When it comes to selecting a first boat for kayak fishing, pick what you can afford. Once you have achieved some proficiency, you’re going to want a bigger, or at least better, boat. The second- and third-hand market for used kayaks is as alive and well, as is the market for new ones, maybe more so.

You are not likely to get stuck in a kayak, no matter which you choose. You may choose to keep your outgrown boat as a backup or loaner for a friend who’s interested in the sport.

Some final words for the beginner would be to join a kayak fishing club. Joining a club lends purpose to your pursuits, and clubs are readily available across the Carolinas. Some clubs are more active than others while some focus on holding fishing tournaments and others conducting outings.

Either way, a kayak fishing club is a great resource for finding out where to go, what to use, and maybe even buy a second-hand boat from someone who’s moving on to the next level.

Don’t wait until the last minute to fix your food-plot soil’s pH. […]

Lowcountry redfish are schooled up and biting

Cold weather brings out the best in Lowcountry redfish […]

Hanging up the trout rod

Trout fishing and writing about it come to an end for author Bob Satterwhite. […]

About Phillip Gentry 773 Articles
Phillip Gentry of Greenville, S.C., is host of “Upstate Outdoors,” a weekly radio show that can be heard on Saturdays at noon on WORD 106.3 FM.