Tackle, techniques must be considered before launching

While any species can be targeted with only one rod, including catfish, Ol’ Whiskerface presents more of a challenge. That’s mainly because he and his cousins are not generally associated with artificial baits.

That’s not to say that kayak anglers can’t be immensely successful pursuing catfish. The go-anywhere yak grants you access to stretches of rivers and backwaters that rarely, if ever, get fished.

A few considerations come to mind for those who are new to fishing for cats from a kayak. Just like other species-specific gear, the catfish has its own requirements to make the kayak catfish angler successful.

Stay comfortable, and be well-equipped 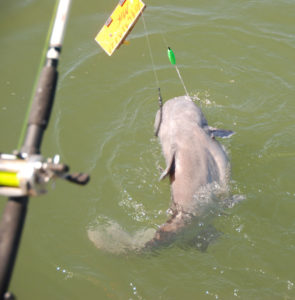 Trolling for catfish is a popular tactic from a kayak as well as a powerboat. Lakes and reservoirs are better trolling bets than rivers. Anglers trolling from a kayak can employ the same slinky weight rig, also known as a Santee drift rig.

The Santee drift rig uses a three-way swivel with one eye attached to the main line, one attached to a long, slinky, no-snag weight, and the third eye attached to a 2- or 3-foot leader and the hook. A small float or floating rattle keeps the hook up and away from structure that would otherwise snag the hook.

This is a great idea for kayak anglers since the distance between rod tips is minimal on a kayak compared to a larger boat. One of the great features about trolling with planer boards from a kayak is that the trolling speed doesn’t have to be consistent. The goal is to keep the bait on or near the bottom.

Once you get the planer boards attached and deployed, you have no hurry to maintain a specific speed to keep the bait off the bottom.

WHAT — Blue, flathead and channel catfsh

HOW — Two methods to consider are: 1. Trolling — dragging slinky weights baited with cut shad across mid-depth flats on the edge of the channel. And 2. Anchoring on those same flats and using live or cut bait like shad or perch.

LAUNCH — Buddle Creek and Southmont are both good access points

INSIDER TIP — It takes a bit of practice from a kayak, but using planer boards to troll the slinky or Santee drift rigs helps move the clutter away from the side of the boat so you can paddle. Put the rods in a vertical position so you can see the bite by the bend in the rod.

HOW — Channel catfish become very active in late summer. Position the boat at an area where the fish will have a current break and cast two or three lines baited with catfish dip bait. Give each spot about 30 minutes before moving on down the river.

LAUNCH — Other than public road access areas on the rivers, you can also find a list of public ramps at  www.upstateforever.org/blueway-mapping

INSIDER TIP — Instead of struggling with an anchor in current, bring a brush clamp, hook or some other way to quickly attach and release the boat from snags, over hanging brush, or other woody anchor points you’ll find in the river. 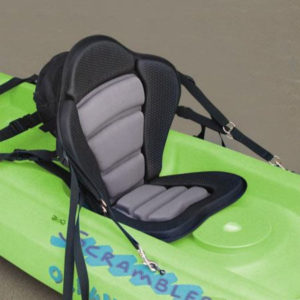 With kayak fishing gaining so much popularity these days, Surf to Summit decided to focus on building a seat just for the angler. They developed the GTS Pro primarily with the kayak fisherman in mind. Its enhanced features, like the oversized bottom pad, accommodate the larger seat wells that are common on many of the new fishing kayaks. The 2-inch, extra-thick thermoformed EVA foam padding added to the bottom section minimizes leg fatigue. It also helps the angler maintain comfort throughout a long day of fishing.

The thermoformed foam upper back-rest portion is a little shorter than the GTS Elite and the Air Wave without sacrificing any support, for the sole purpose of enhancing the paddler’s access to the rear of a kayak’s tank well and hatch section. Surf to Summit enhanced the seat attachment system by spreading apart the rear webbing tie downs. Paddlers have peace of mind in knowing the rod is safe.

Bass Pro Shops understands that catfishing is not for the faint of heart. You could hook into a monster at any time. So they built the CatMaxx Baitcast Combo like a tank. This matching rod and reel can tame a catfish of any size, even in swift current.

The CatMaxx Casting Rod is the perfect complement. Its high-vis white blank is made of a blend of E-glass and carbon to withstand heavy abuse. And it’s topped with structurally reinforced, snag-resistant Pac Bay DPL guides. Our EVA handle sports a crosshatched shrink-wrap grip, flared rubber butt, and an integrated cushioned reel seat for maximum stability.

Sign Up Now
About Phillip Gentry 763 Articles
Phillip Gentry of Greenville, S.C., is host of “Upstate Outdoors,” a weekly radio show that can be heard on Saturdays at noon on WORD 106.3 FM.