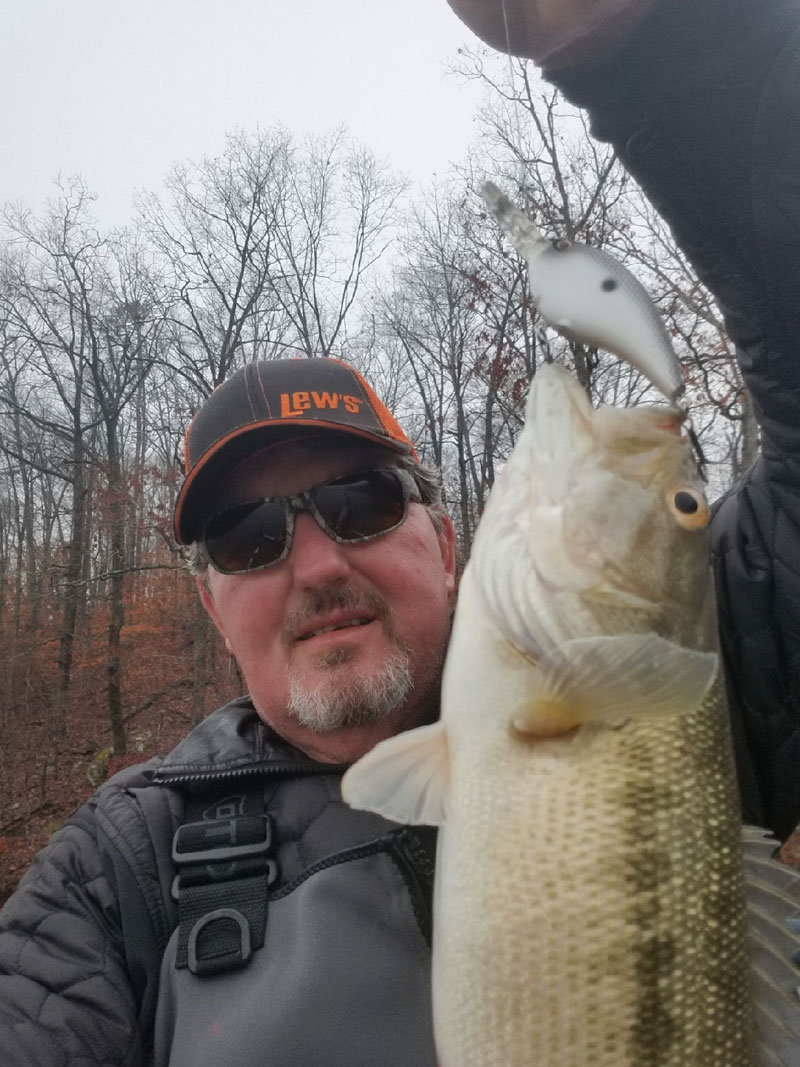 February hasn’t been a month I have really looked forward to as a bass fisherman, unless there was a trip to Florida or Texas involved. There are fish to be caught in the Carolinas, too, but you have to catch the weather and water conditions just right.

I began to change my mind a year or so ago when I tied on a bait I helped design that seemed to fit perfectly into the late-winter mindset of most largemouth, smallmouth and spotted bass: Berkley’s Frittside crankbaits. Now, when I get on the lake in February, I feel like I’ve really got a chance to consistently catch bass — plenty of them, and some nice ones.

The biggest thing about this flat-sided lure is its action; there’s nothing else like it. It’s got more natural roll than any other crankbait. If you look at how it twists in the water, it’s got a good 3/4-inch roll in each direction. We worked on that feature, I don’t know how long, but then the designers at Berkley moved the lip just a little, and the bait came to life.

It’s so good, it doesn’t matter who you are when you’re throwing it. You can catch fish. It’s a little like a souped up Mud Bug or Wiggle Wart. A Wiggle Wart has a lot of roll, but the Frittside has a lot more action that comes off that side-to-side roll.

I remember thinking when we were working on the bait that Ed Chambers’ Tapp bait and the Steve Blazer bait were the best flat-sided crankbaits ever, and if we could get a bait as good as one of those, I’d be happy. I think we did it.

The action is just what those February and March bass want. It imitates a crawfish really well, especially the No. 5 size. And it also glides through the water like a shad if you slow down your retrieve a little bit.

If you can still find them in the stores, the two colors you need to be fishing in February are red, to mimic crawfish, and honey shad. The No. 5 bait runs about 4 or 5 feet deep, so it’s perfect for bass that are making their first move out of deep water as they stage, waiting to move shallow for the spawn in about a month or so.

I want to start fishing it this month somewhere real deep — and real shallow. You need to have your boat sitting in deep water but be able to throw to the bank. I look for 45-degree banks, and I just go down the bank. You catch a few, and you’ll figure out if they’re on the points, in between points, around pockets. You’re not going to go past a fish with this bait and not get bit.

My favorite places are riprap, rocky banks, the edges of grass beds, big stumps right under the water and brush piles. These are places where bass will move because the water will have warmed up a little more, and places they’ll hold. You can find them staging up in the creeks or around pockets if you’ve got deep water close by. Every lake is different; at Lake Murray, you might be sitting in 25 feet of water, casting to the bank, and they’ll come up and hit it right at the boat. Buggs Island is the same way.

One thing about these flat-sided crankbaits and this time of year. You really don’t want your crankbait digging into the bottom. Bass are looking up at the surface for their food. That’s why you want it to be: above their heads. Last year, I caught smallmouth bass on Lake St. Clair in Michigan in 20 feet of water; they were coming up and hitting that bait 5 feet under the surface. The bait is probably more efficient when you aren’t hitting the bottom, because you’re not going for a reaction bite. You’re looking for a bite because of the bait’s action, that wiggle and roll.

I fish these baits on a 6-foot-8 Lew’s cranking rod and a BB1 baitcasting reel. I try to stay with as light a line as I can. These baits were made to fish on 10-pound line, but don’t be scared to fish them on 8-pound. Just don’t go above 12, or the weight of the line will start to impede the bait’s action. I like to fish it on monofilament or copolymer line; some people like to fish it on fluorocarbon, but I don’t think that’s the best line for this bait.

What I like most about these baits and this time of year is that the average fisherman, with no special knowledge of flat-sided crankbaits, can tie it on and catch fish. You can’t ask for more in February.

The N.C. State Championship Youth Hunter Education Skills Tournament will be held in person on April 30 in Ellerbe, N.C. […]

About David Fritts 115 Articles
David Fritts is a 61-year-old pro bass fisherman from Lexington, N.C. He won the 1993 Bassmasters Classic champion and the 1997 FLW Tour Championship, and he was the 1994 BASS Angler of the Year. He is sponsored by Ranger boats, Evinrude outboards, Lew’s, Minnkota,and Berkley.