Bonnetheads love to bite in the heat

Sight-casting is probably one of the most-exciting ways to fish. It’s very similar to stalking deer or jump-shooting ducks. But getting within range with a fishing rod in hand is not even half the battle. Putting the bait in the fish’s path AND getting him to eat it is when the excitement really starts.

Try that sitting in a kayak within spitting distance of a 3-foot shark, and you’ve just set the stage for a kinder, gentler version of shark fishing.

The summer heat can put a damper on fishing for other inshore species. But for bonnethead sharks, the hotter it gets, the better they bite. Bonnetheads are unique among southern shark species. Unlike most sharks, they ply extremely shallow, inshore waters. This makes them easier to spot when fishing shallow bays and backwaters, particularly those with a lot of exposed oyster shell at low tide, where the fish hunt for shrimp, crabs, and small baitfish.

Put a bonnet on it

Bonnetheads like to hug the bank in remote reaches of shallow, tidal creeks when searching for food. Mistakenly called “tailing” by anglers unfamiliar with the species is actually the bonnethead moving its head back and forth, using sensory organs embedded in its bonnet-shaped head, to detect food.

The problem with sight-fishing for bonnetheads is once you have located one working in the shallows, it often spooks before the angler can paddle within casting distance. Solve this problem by using live bait to tempt them, particularly a piece of quartered blue crab. Even after the fish has sounded, it most likely hasn’t gone far. And the smell of fresh cut crab usually guarantees the fish will circle back.

A good strategy when approaching the last-known location of a bonnethead is to have two rods rigged and ready. Quickly stake down in the shallow water and cast one bait ahead and one behind of where you marked the fish.

A good outfit to use when targeting bonnetheads from a kayak is 20-pound spinning tackle spooled with 20-pound braid. A bait rig consisting of a 4/0 to 5/0 circle hook connected to a 3-foot section of at least 40-pound wire leader is recommended. A 2- to 3-ounce, no-roll sinker — depending on the prevailing current  and tide ­— is threaded on just above where the main line joins the leader.

Bonnets have small teeth that are capable of cutting regular fishing line, but it’s their rough skin, particularly the tail, which is used to provide a drag-ripping initial run, that often snaps inferior fishing tackle.

The best bonnethead tides are 2 hours before and after low tide, when the sharks and the bait they’re hunting are more exposed. During other parts of the cycle, or in areas of little tidal movement, kayak anglers can have success anchoring up with a stake-out pole and fan-casting baits into deep holes or intersections in tidal creeks.

One final note: bonnetheads don’t tolerate much boat traffic when they’re in the shallows, so the furthest, most-remote areas, those almost inaccessible to powerboats, often hold the greatest fishing potential.

While that might present a problem for powerboaters, it’s even more reason to get out and try fishing for bonnethead sharks from a kayak.

A fresh piece of chunked blue crab is one of the top baits for tempting bonnethead sharks. The beauty of using them for bait is that crabs are not that hard to find or catch once you’re out in the water.

One way to enhance the appeal of blue crabs as bait is to chunk them, that is, cut them and partially clean them to produce scent while still saving enough bait to stay on a hook and attract fish.

The following steps will walk you through the process.

• Using a heavy bladed knife and cutting board or adequate backstop, place the blade on top of the crab and divide the carapace in half, creating equal portions.

• Cut the claw off just past the pivot point of the pincer. This step has nothing to do with disarming the bait, which is dead anyway. It  exposes additional meat to generate more scent.

• Insert the hook into the body cavity and exit through the leg joint. Make sure to expose the barb so the bait come off the hook in current.

Smaller baits can be created by cutting the chunk in half, effectively quartering the crab. Removing the legs from quartered bait can be done to reduce the size of the bait. A quartered crab with the legs removed makes excellent bait for other saltwater fish, especially large sheepshead. 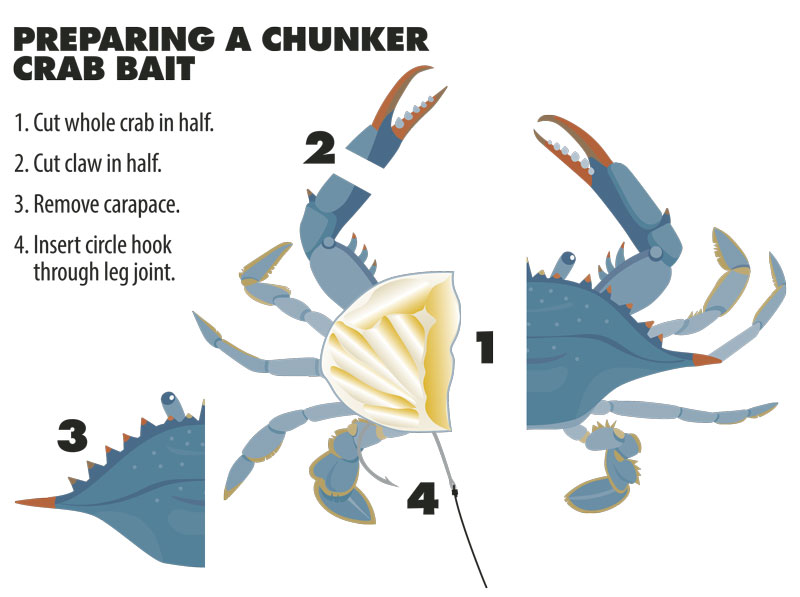 WHERE — Shallotte Inlet and Shallotte River, behind Ocean Isle and Holden Beach.

HOW — The deeper waters of Shallotte Inlet and the flats and bars in and around Shallotte River are a good place to look for bonnetheads searching for blue crabs.

INSIDER TIP — Other shark species will also ply the cuts and creeks in this area, but may more readily bite cut menhaden or mullet over blue crab.

WHERE — Bulls Bay, between Charleston and Georgetown.

HOW — Stake out one of the many creek intersections on the perimeter of Bull’s Bay on in incoming tide.

INSIDER TIP —Resist the urge to use commercially made wire rigs and make your own wire leaders from a roll of 40-pound leader material. Bonnetheads are stronger fighters than they might appear and can easily break commercially made pre-packaged products.

The NCWRC is hosting an Introduction to Falconry workshop to go over all the details and regulations of hunting with a raptor. […]

Anglers can learn a host of fishing skills throughout July at the Pechmann Fishing Education Center in Fayetteville, N.C. […]

Eighteen new wildlife law enforcement officers were sworn in by the NCWRC on July 20, 2021. Each officer now begins 6 months of OJT. […]

About Phillip Gentry 763 Articles
Phillip Gentry of Greenville, S.C., is host of “Upstate Outdoors,” a weekly radio show that can be heard on Saturdays at noon on WORD 106.3 FM.

Lake Wylie flatheads turn on in summer after dark […]