Chris Aycock of Warrenton, N.C. killed a 22-point buck in Warren County on Oct. 26 during an early evening hunt. The deer had 17 scoreable points which totaled more than 187 inches. It’s the biggest buck Aycock has killed. He said he’s blessed beyond measure for experiencing the hunt of a lifetime.

Aycock had been hearing about a trophy buck for years in the area. And right before the 2020 archery season, he got a look at the buck during a chance meeting. But his trail cameras had never captured a photo of the deer around the 22-acre hay field he hunts.

This past Monday, he finally saw the deer up close. Very close. He shot the deer from 15 yards away. But the hunt started with a bunch of doves.

His stand, which overlooks a cutover, some hardwoods, and the hay field, gave him good visibility. And after getting into the stand, he immediately began seeing doves taking flight.

“What really got my attention is doves were popping up out of the cutover,” he said.

He knew something was moving through, pushing the doves to fly. He hoped it was a good deer, but he couldn’t catch sight of anything but the birds. 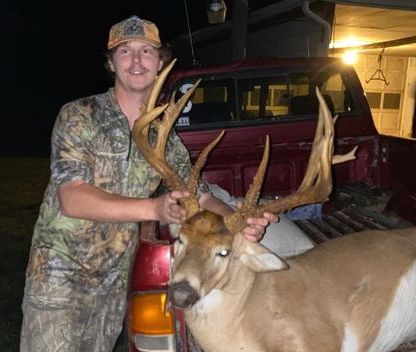 “About every five minutes, I would hear another dove or two pop up out of the cutover. I knew something was coming. But at that point I had no idea if it was a buck or a does. I thought it could have been a coyote,” he said.

The doves kept taking off as the deer got closer

Around 5:40 p.m., a dove pretty close to Aycock’s shooting lane took off.

“The last dove that popped up was maybe 30 yards away. And I knew by that time something was right up on top of me,” he said.

The hunter turned around, making sure whatever it was hadn’t snuck out the backside of the cutover. When he turned back around, he saw the deer. And it was almost in the clearing.

“When I turned back around, he was already almost into my shooting lane. He was within 15 yards of me,” he said.

The first glance at the buck was enough for Aycock to realize the deer was something special.

“I knew automatically he was a shooter,” he said. “I’ve learned over the years not to look at the horns. So it was all I could do to get my rifle on his shoulder and squeeze off a shot. When I shot, he stood straight up on his back legs. He went maybe five yards and crashed.”

Immediately after pulling the trigger on his Remington 700 XHR .270, the hunter lowered his rifle and looked at the deer as it stood on its hind legs.

“I knew right then, that buck was like something I’d never seen before,” he said.

The 22-point buck was a legend in the area

He texted a couple of buddies who came to help him track the buck. Aycock was sure he’d made a good shot on the deer. But what he didn’t know at the time is that the deer died almost on the spot.

Listen to our podcast to hear more of Aycock’s story

“I waited about 30 minutes before I got out of the stand. My buddies got there and I went straight to the spot where my shooting lane was. And he wasn’t even five yards from where I’d actually shot him,” he said.

The deer was a bit of a legend in the county. Several other hunters had been keeping tabs on the buck over time. One hunter that Aycock knows had more than three years of trail camera photos of the buck.

“Multiple people had seen him. And multiple people were hunting him for three years. One guy had three and a half years worth of trail cam pictures of him. After I killed the buck, I called him and told him to come over so he could at least get his hands on it,” he said.

Congratulations to Aycock, who is now entered in our Bag-A-Buck contest, making him eligible for a number of great prizes. This includes the grand prize — a 2-day, two-man hunt at Cherokee Run Hunting Lodge. Click here to view the Bag-A-Buck gallery or to enter the contest yourself.