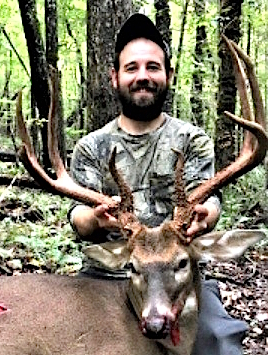 “I had a lot of history with this deer,” said Porterfield. “I had him on trail-cameras for three years, different days and times. He was a smart deer that got bigger each year.

“Last year I’d get pictures for a week, then he’d disappear for weeks. Then he’d show up again. He did the same thing back to 2017. I couldn’t pattern him.”

Before the onset of the rut, the buck preferred the company of does and fawns rather than traditional “bachelor” groups of male deer.

The hunter relied on corn to lure deer near a ground box blind. But the animal didn’t consistently visit that food source. Porterfield placed the bait pile near a small creek 20 yards below a homemade box blind set on a hillside in 2016.

“The woods around the blind had oak trees. But it was thick to the creek, so I cut two shooting lanes and put corn at the end of each one,” he said. “I think the blind was near a bedding area and (creekside) travel route.”

The hunter’s trail cams also showed the buck felt safe in the area “because big deer mostly don’t move in daylight. But this one came mornings and afternoons.”

Porterfield put together a plan for the elusive 8-point buck

“After that, he disappeared for 15 days,” he said.

The buck’s inconsistency didn’t bother the hunter who by then was accustomed to its spotty appearances. He devised a strategy for the ghost buck.

“I decided to hunt as many straight days as I could,” Porterfield said. “That was the best chance to see him once. From (2020) opening day, I was in the stand for five straight days. With heavy rain Thursday, I skipped a day. But a low-pressure system was coming Friday, so I figured deer had to be moving.”

Porterfield entered the stand at 5:30 a.m. Sept. 18. Two hours later, 13 bucks visited the corn. But the big 8-pointer was not one of them. When the deer dispersed, the hunter’s long wait began.

“I thought he might show up at 1 p.m.,” he said. “I dozed off, and at 3 p.m. a baby deer came through the woods. I knew (the big buck) would be with him. Two minutes later, he came walking beside the creek.”

At 3:30 p.m. the buck stepped into a shooting lane, 25 yards from Porterfield’s blind. He pulled back the drawstring of his Elite compound bow set at 70-pounds draw, aimed through its single-pin sight and let loose a BlackOut X5 Envy carbon arrow. A 100-grain, three-blade Ramcat broadhead finished off the arrow. It hit the quartering-away deer in the side and sliced through both lungs.

“After the shot, I couldn’t talk,” Porterfield said. “After I calmed down, I called (friend) Scottie Morris. He said: ‘If you’re sure you smoked him, go to him.’”

Porterfield found a wide blood trail and the buck 70 yards from the arrow’s impact point. His friend Scott Anderson responded to a phone request and helped drag the buck from the woods.

Morris pulled the deer’s jawbone and estimated its age at 5 1/2 or 6 years.

Congratulations to Porterfield, who is now entered in our Bag-A-Buck contest, making him eligible for a number of great prizes, including the grand prize which includes a 2-day, two-man hunt at Cherokee Run Hunting Lodge. Click here to view the Bag-A-Buck gallery or to enter the contest yourself.

Lawton Robinson of St. Matthews, SC killed a big Calhoun County buck after missing it — or so he thought — a few weeks earlier. […]