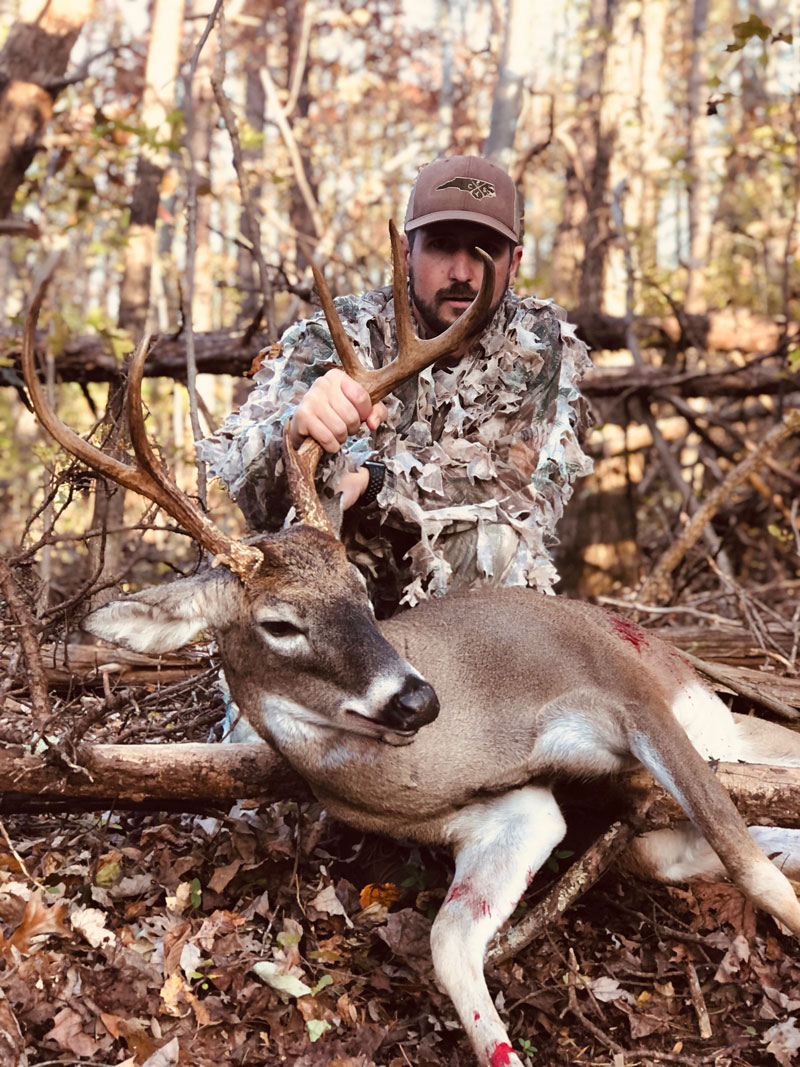 It was an unforgettable hunt

In 25 years of hunting, through countless early mornings and long afternoons in tree stands and ground blinds, I’ve never had so much as an opportunity at a “big” buck. I’ve seen them through binos during archery season, only to have them not come into range. I’ve seen them during rifle season, only without a rifle. Call it no luck or bad luck, it has just never worked out. That finally changed on the afternoon of November 7, 2020.

After arrowing a deer for the freezer early in the season, I had sat out all of October. My parents have a small piece of property in Brown Summit, which has been visited by several nice bucks over the past few years. This year, however, had not shown much promise. A good bit of the land had been cleared over the summer, and seemingly whatever was attracting bucks along with it. I’d had exactly zero trail cam photos of anything but spikes and forkies since. Still, November being November, there was always hope.

With the loving and understanding wife taking the kids for the weekend so dad could have his deer-cation, the blitz was on. I had from Friday morning until sundown on Sunday to sit and see what happened. My only real strategy was to spend as much time hunting as I could, keep an eye on the wind direction, and cross my fingers. I had two stands hung, one in a group of oak trees where we’d seen groups of deer hanging out in the evenings, and another over a creek further into the woods. After seeing a whole lot of nothing on Friday in the former, I decided to go all or nothing in the woods for Saturday.

I loaded up with snacks, went easy on the coffee, and climbed into my stand well before dawn. Hours rolled by. The woods came alive with birds, squirrels, and even two turkeys, but no deer. At 10 am, I had to take a break. I headed home for a bite to eat, but by noon, I couldn’t help but feel like I was missing out on something.

At 12:45 pm, I was halfway up the ladder stand when I heard something emerge from the brush behind me. A huge buck had been bedded 30 yards from the stand and just sauntered away down the creek. I couldn’t believe it. I was crushed. I finished the climb and sunk into my seat sulking in my terrible luck, but eventually came around to the upside that I still had 5 hours of daylight left. The buck didn’t seem agitated or spooked. Maybe he’d come back.

A couple of hours later, I heard what could have been a deer approaching through the brush in about the same spot the buck had been bedded. Nothing came out in that moment, but another hour on, at 3:45 pm, out he stepped. The rest didn’t seem real to me. Almost still doesn’t, even though I have the pictures and the taxidermist has my deposit.

This time, he hopped the creek and made a turn on a path that would take him right past my stand. As he passed behind an uprooted tree, I was able to come to draw and knew I had him checkmated. Two more steps and he was broadside at 15 yards. He made it about 50 yards before he crashed. He went down just out of sight but I could hear the tell tale signs that my arrow had done its job. I marked the time and swore to myself I’d give it half an hour anyway, just in case. That lasted about 25 minutes.

Getting my hands on him was the pinnacle of a decades long quest (so far). Finally, a real dandy of a buck, made all the more special I was able to get it done with my bow. He’s a non-typical 7-pointer with a malformed right antler and a downturned brow tine. A classic 4×4 on the left. I haven’t scored him or even measured the spread, but he’s one I’ll remember forever.