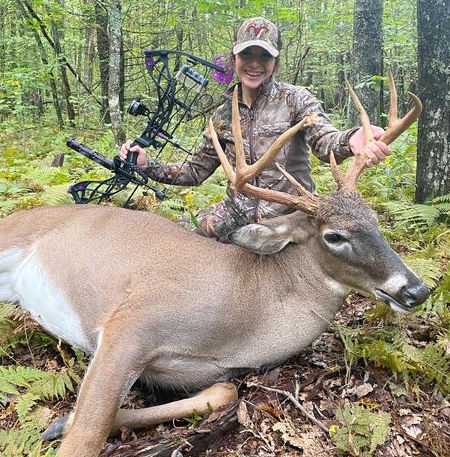 Big buck was fighting another buck when she shot it

Ashley Ingram of Newland, N.C. killed the biggest buck of her life on Sept. 26 in Avery County. She shot the 8-point, 205-pound buck from a tree stand with her Bowtech Carbon Rose compound bow.

The deer showed up slightly earlier than Ingram expected. Her trail cameras took regular photos of the buck around 6 p.m. on most evenings since June. Once the season opened, she felt like it was just a matter of time before it showed up when she was in the stand.

On her first hunt of the 2020 season, she slipped into the stand at 4:30 p.m., expecting to have time for her and the woods to settle down before showtime.

“A lot of ferns are all around my stand. So I knew the buck wouldn’t make much noise coming in. Still, he surprised me when he showed up earlier than I expected. It was only about 5:15 p.m. All of a sudden, he was under my stand. Then he walked out about 20 yards. I didn’t have my bow in my hand, so I was trying to figure out how to pick it up without spooking him,” she said.

The deer took off in a run, but stopped about 50 yards away.

“I wasn’t sure if he was going to run off for good, or come back. But it gave me a chance to get my bow ready and to try to get my breathing under control. And then another buck — a smaller one — showed up,” she said.

205-pound buck took another run after being arrowed

The smaller buck was in range, but shooting that one didn’t even enter into the equation for Ingram. She was after the 8-point, 205-pound buck and wasn’t going to settle for anything less, even if it meant leaving the woods empty-handed that day.

Luckily, leaving empty-handed wasn’t necessary. The big buck moved back into range, and it began fighting with the smaller buck. Ingram drew back and waited. When a clear shot came open at 25 yards, she released her arrow. The Swhacker broadhead hit the buck, which took off running with the smaller deer.

“I felt like a made a good shot. But I was still a little worried,” she said.

She called her husband Coty, who was hunting a couple of miles away. Then she got out of the stand and began looking for blood. She found none. Now she was getting more worried.

“Coty showed up to help me look. Pretty soon, we found a little bit of blood, but it wasn’t much. We were about 50 yards from the stand now. I started doubting myself. And I finally told him I didn’t think I’d made a good shot,” she said.

“You don’t think so?” her husband asked.

Ten yards away, her trophy buck was lying on the ground.

“I was really relieved and very excited. It’s the biggest buck I’ve ever killed,” she said.

Congratulations to Ingram, who is now entered in our Bag-A-Buck contest, making her eligible for a number of great prizes, including the grand prize which includes a 2-day, two-man hunt at Cherokee Run Hunting Lodge. Click here to view the Bag-A-Buck gallery or to enter the contest yourself.

Tommy Inman has killed his share of bucks over the years, but the one he killed on Sept. 18 was his first with a crossbow, and it was an awfully big one. […]