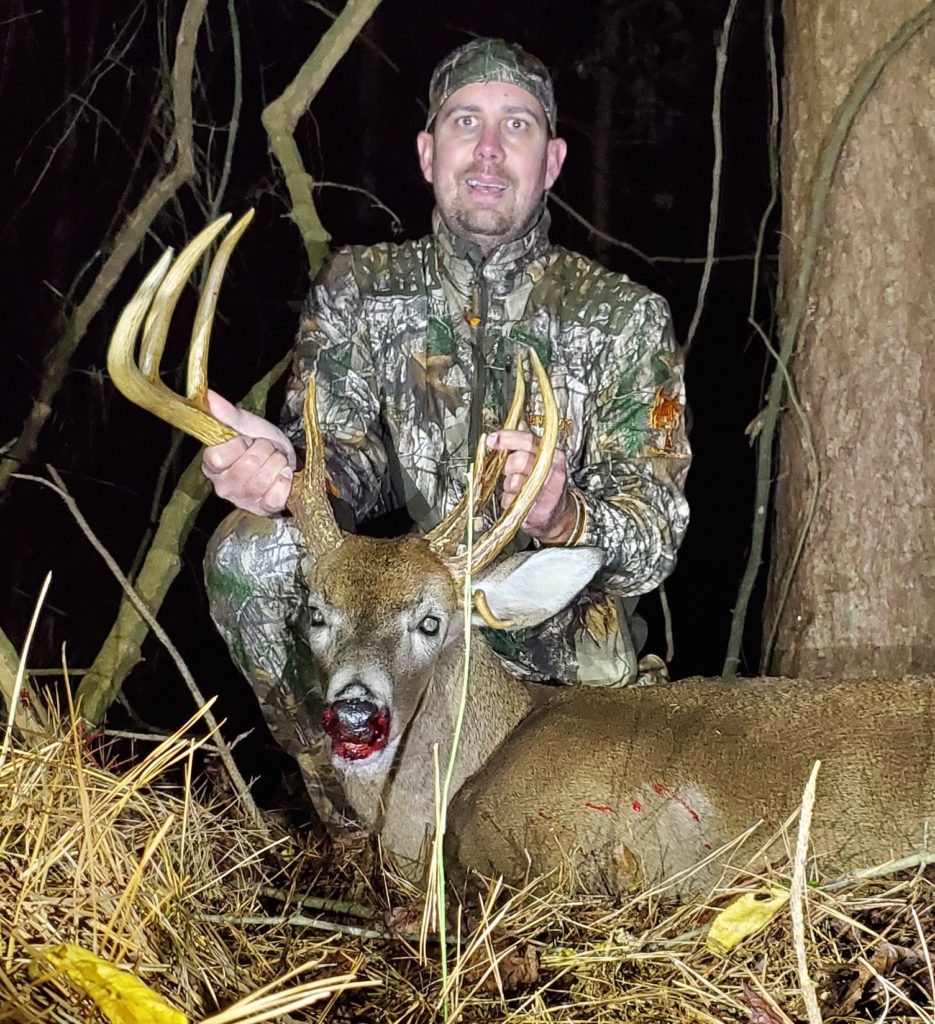 I managed to get another nice buck for the second year in a row. I first came across this Duplin County deer back in mid-October when I put  a trail camera out on a piece of property I have really hunted since 2017.

I went back and forth with this buck on where and when he would be there. And it all finally came together on Dec. 1, 2020. I connected with the buck I nicknamed “Freak Show” due to the oddity on the left side of his antlers.

I got in the stand at 5:15 a.m. and settled in while trying to keep warm. The temperature was 42 degrees and dropping, and the wind was picking up and making it feel colder. Shortly after dawn, after 6:45, two does were my first sighting.

The does started to cross the field to my direct left towards me, but something must have made them uneasy. As I scanned the woods around me and looked back, they were nowhere to be seen.

My next sighting was a small spike that came in grunting from my direct right, downwind around 8:45. He came within 15 yards before cutting right and he stopped at the field’s edge. He gave it a once-over, but things didn’t sit right with him so he 180ed and made his way back the way he came from the pine thicket.

That was the start of a very long day. From that point on until about 11:45, I saw squirrels and three or four sets of turkeys coming and going. I saw 20 birds as they came and went, although some were counted twice.

Then things completely died. Absolutely no movement whatsoever until about 3:30. That’s when squirrels finally started to move about again. Then I had my next deer sighting around 4:40.

A doe surprised me as she bolted into the field at a trot. She made her way underneath the feeder and started eating. i started my GoPro at this point, as it seemed unnatural.

Shortly afterwards, I head it — that distinctive sound of a buck grunting. He grunted two or three times, then charged into the field like a bull ready to fight. He stopped and was eyeing the doe. It took me a few seconds for my brain to understand that this was my target buck; the buck I have spent countless hours and days in the stand this year hoping to at least catch a glimpse of him. Now, here he stood at roughly 25 yards.

I still had my phone in my hand as I was using it to control my GoPro, and in the nervousness, I stopped the recording. I waited a few seconds so I could start recording, then put my phone in my binocular case. I still had my heavy gloves on, trying to keep my hands warm, which prevented me from feeling comfortable about shooting. Left glove came off easy; the right, on the other hand, fought me tooth and nail.

I watch him and the doe, fumbling trying to get my glove off without spooking either roof them. He made a turn towards the doe. She started to run around in circles before making a B-line into the small patch of trees 30 yards in front of me.

By the time I managed to get my glove off, grab my bow, stand and turn to my shooting position, I watch as my target buck trots off into the woods following the doe and out of sight. I freak at this point, knowing I just blew my only shot with him. So I do the first thing that comes to mind in a panic, and grab the grunt tube.

I gave it three good blows and do the only thing I can — wait. Luckily, and to my surprise, the doe came trotting back in not 30 seconds after. This time, I am ready. I’m standing, have my bow in hand, and am watching for where he is going to be coming from.

About two minutes pass, and nothing. The sinking feeling is getting worse in my chest. Then I hear it — “grunt, grunt, grunt.” I watch as he walks back out and stops, facing me at 18 yards.

He puts his head down, so I take the opportunity and draw my bow. At this moment, he looks to his right out into the main field and freezes. We are now at a stand-off — me at full draw and him straight on with no good shot. He turns and looks at the doe still facing me. Thirty seconds go by…45 seconds and still no good shot.

After a minute at full draw, still nothing. I debate whether to let down and attempt to draw again if and when he turns. I talk myself out of it as I feel one of two things will happen: 1) He will see me let down and spook. 2) I would not be able to draw the bow again due to nerves/cold. So I hold full draw.

Finally, after two minutes and 15 seconds, the buck turns to the does and takes a few steps forward and stops perfectly in the clearing between the vines having from the two trees in front of me. I rest my first pin on his shoulder and release. The arrow hits him dead center in his shoulder, and I watch as he donkey kicks and runs.

I watch and listen as he runs out of sight, back to the pine thicket. Just a few seconds later I hear him crash. It’s at this point I collapse into my tree stand seat and reflect on what just happened.

I sat until just before dark as a doe and a yearling moved in, and I didn’t want to spook them climbing down. After they moved on, I climbed down, packed up, and made my way back to the truck. Found my deer shortly thereafter, not 30 yards across the ditch on the neighboring property.

The neighbor has told me before that I’m clear to retrieve, but I gave him a courtesy call to get the good-to-go one more time. I got it all on the GoPro, but it surely is a hunt I won’t soon forget.

Thank you lord for a beautiful harvest. He is truly something special and quite unique.

Danny Brandon killed this 9-point buck in Caswell County, N.C. The buck had a 22-inch spread.