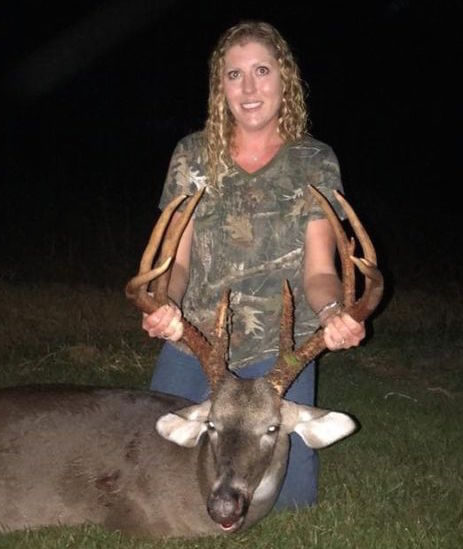 Raven Ginn Polk of Cummings, S.C. killed a lowcountry brute on Sept. 25 in the Salkehatchie Swamp area of Hampton County. The 12-point buck is her biggest ever, and has been green-scored at 146 7/8 inches. It weighed 190 pounds and is a buck her trail camera captured a couple of times during the 2019 season.

Polk shot the deer with a Browning A-Bolt .30-06 from about 120 yards away. She was sitting in a tripod stand when the big buck showed up.

“We got two pictures of him last year during the rut. So I did not know if this was his home territory or if he was just passing through, hunting does,” she said.

Polk said leading up to that day, she’d been noticing some pre-rut activity. That gave her high hopes that the 12-point buck would be coming around any day now.

“I’d hunted two nights prior from that same stand and I had a deer come up grunting behind me. That deer did not come out. But I did have an immature buck step out in the clearing and it was also grunting,” she said. “So I knew they were starting to talk a little bit. So I figured I would cash in on the opportunity.

Unfortunately, the weather wasn’t doing its part. It was a very hot and humid day. And it rained and stormed off and on. That dashed her hopes of seeing very much activity, but she had a chance to hunt, so she took it.

“I really didn’t expect to see a whole lot. But I wasn’t going to pass up the opportunity to hunt when I had it, so I went.

A late start to the hunt pays off

Polk strives to get in her stand before the deer are moving, but not so early that her scent has a lot of time to linger and alert the deer to her presence. But on this day, she was running a little behind, and got into the stand around 6:15 p.m.

Because of the recent grunting, she decided to do a little grunting of her own once she got into the stand. Then she settled in and waited. She was overlooking a food plot about 60 yards away. Some young deer showed up around 6:45, and she could hear more deer walking through the woods.

As it got closer to dark, she heard a sound that got her pretty excited. A stream runs behind her stand, and she heard something moving through the water. She got her rifle situated in the direction she thought the deer would walk out. And just like that, the big 12-point buck appeared.

Polk didn’t realize at the time that it was the same buck from last season’s trail cam. She practices trophy deer management, and she knew right away this deer was a shooter.

Listen to our interview with Polk

“I did not take the time to count points or look at width. I looked enough to know that he was big. And I went ahead and shot him,” she said.

The deer kicked and ran off. But Polk was sure she’d hit made a solid hit. She found a blood trail pretty quickly, and tracked the deer down. It had run about 30 yards before crashing for good into some thick brush.

She called her husband and a friend to help her recover the deer, and that’s when she got a good enough look to see that it was the deer from last season.

“He’s got a pretty distinct rack,” she said. “We named him dagger because of his extremely long brow tines.”

Polk is anxious to get the deer officially scored after the 60-day drying period, and she’s hoping to take it to the Dixie Deer Classic in Raleigh, N.C. in the spring.

Congratulations to Polk, who is now entered in our Bag-A-Buck contest, making her eligible for a number of great prizes, including the grand prize which includes a 2-day, two-man hunt at Cherokee Run Hunting Lodge. Click here to view the Bag-A-Buck gallery or to enter the contest yourself.