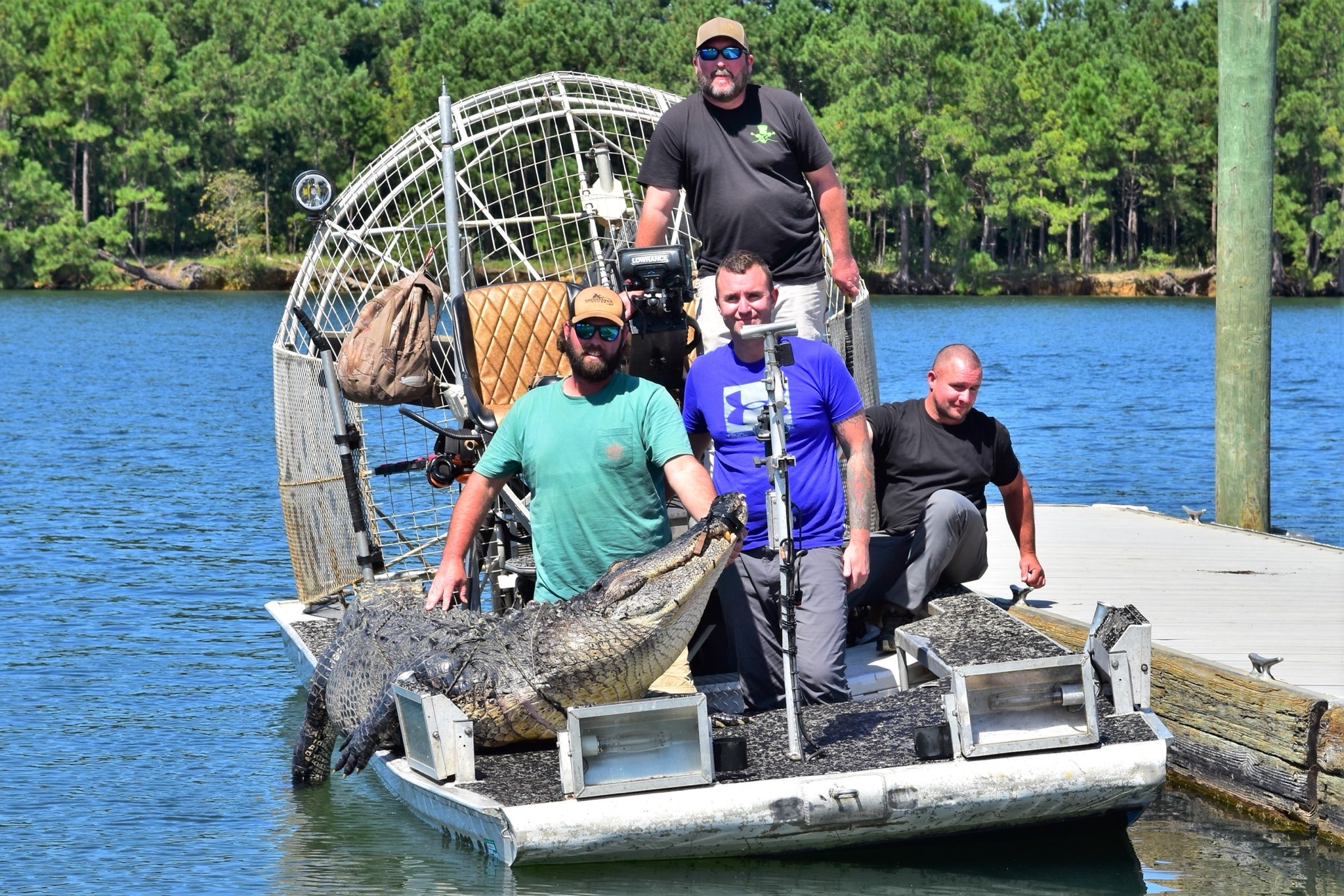 Jeremia Thibeault of Jim Thorpe, PA killed a 13-foot, 1-inch, 778-pound gator on Santee’s lower lake on Sept. 15, 2022. Thibeault was hunting with his brother Jim and guided by Hunter Neeley of Chapin, S.C. and Crick Hooker, also of Chapin.

The fight took more than 3 hours, and that was after the Thibeaults drove 12 hours, then spent the next 10 hours trying to find a trophy gator while cruising the lake with Neeley and Hooker.

It wasn’t Thibeault’s first gator, but it is his biggest. Getting a 13+ footer was his goal — and after consulting with some local outdoorsmen, that goal led him to contacting Neeley, who has guided numerous hunters to trophy gators in that size range at Santee.

As the application period for the 2022 season drew to a close, Thibeault’s long-time gator hunting guide passed away. And almost too late to purchase his tag due to a mix-up with SCDNR’s paperwork, he noticed an email saying he’d been drawn for a Middle Coastal tag.

“I had to respond quickly since I had failed to notice the email earlier. I bought the tag but wasn’t sure what I would do for a guide. Ron and I had talked about drawing a Middle Coastal tag. We discussed it often. And it was bittersweet to draw it after his passing,” he said.

Leading up to the season, he spoke with Neeley numerous times about hunting and fishing in general, and shared his gator hunting goal with him. They decided to get it done.

“It was easy to see he lived and breathed this stuff, especially big gators,” he said. 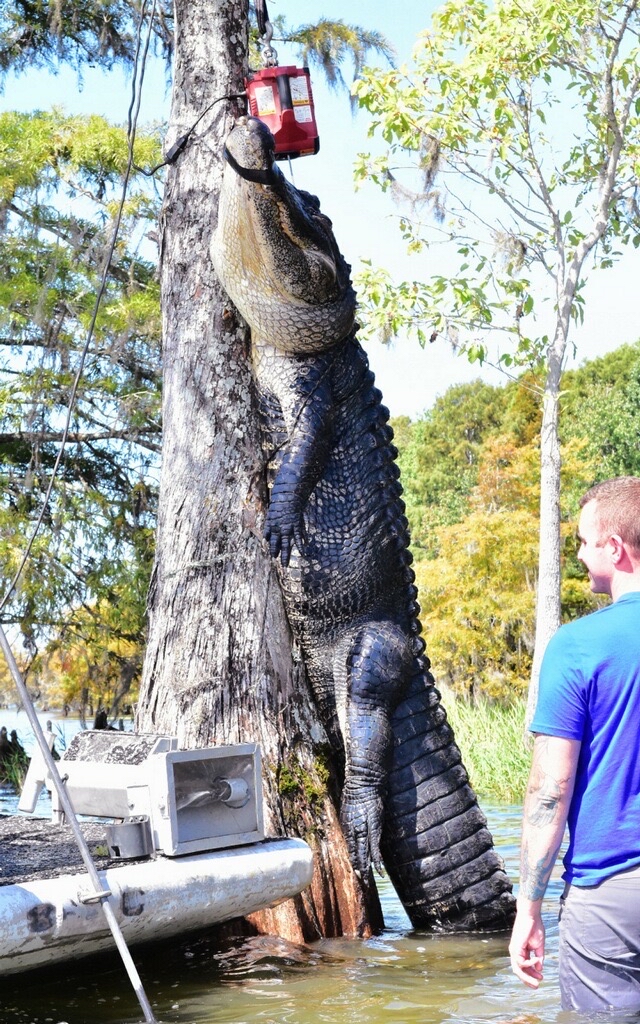 As the date for his trip drew near, Thibeault’s brother asked him why he wanted to go on this trip. He struggled to put it into words, but in making an effort, Jim decided to join him.

“My brother wasn’t sure why I wanted to go on this trip. I can never explain the mixture of emotions when taking a big alligator.” he said.

When they’d completed this hunt, Thibeault turned the tables on his brother, and asked him to describe the experience.

“After taking this monster, I asked Jim how he would describe the fear, adrenaline and fatigue, and he couldn’t. It has to be experienced to be understood. Taking a creature that could be 75- to 100-years-old has some sorrow to it,” he said.

778-pound gator would not give up

With every attempt we made at approaching, he would dive and move into a deep channel with trees lining the bottom. We could’t find him.

Sun now fully up, Jeremia spotted him with a pair of 10×50 Swarovski binoculars, surfaced near shore.

Two more attempts and the last gave us a visual mud trail.

Blind casting, Jeremia hooked him with a bit of luck after catching multiple trees. Crick and I both joined, adding two more lines. He sank in deep water for nearly 2 hours.

When he surfaced the first time, my heart sank. I thought we were all dead, or would just lose him. After a failed crossbow attempt, the gator sank another hour, then came back to the surface.

We then were able to get the harpoon into him. He went ballistic, then sank again. It gets pretty inaccurate after that. Too much adrenaline, fatigue, fear honestly. I know we harpooned him three times, hooked him with a rope at least twice.

The first attempt with the large hook/rope, it tangled lines and we lost one, but quickly got it back into him.

After surfacing him with the larger ropes, we shot him three times.

He dove again, and after a 20-minute struggle, we surfaced him for two more shots to kill him.

We still weren’t convinced he was dead. But by this point, all were exhausted from the long fight. Any fight he had left was gone after we dragged him slowly backwards toward the shallow water. At this point, it was 11 a.m.

Once in the shallows, we gaffed him, taped his mouth, tied him off twice to the boat, and brought him to the cypress to winch him into the boat. It was a very precarious ride to the ramp, which was luckily in eyesight.”

During the fight, some pro photographers in kayaks paddled by.

“They asked if we had three fish hooked. We told them, no, a gator. They padded off but came back when we were hoisting it. One knew the gator. He was visibly shaken when he saw how big the gator really was out of the water. They took many photos, then quickly got off the water,” Thibeault said.

Thibeault said it wan’t until he got in the water to guide the gator to the cypress tree that he realized how massive the 778-pound gator was. It was tough for him to get a good look during the fight. 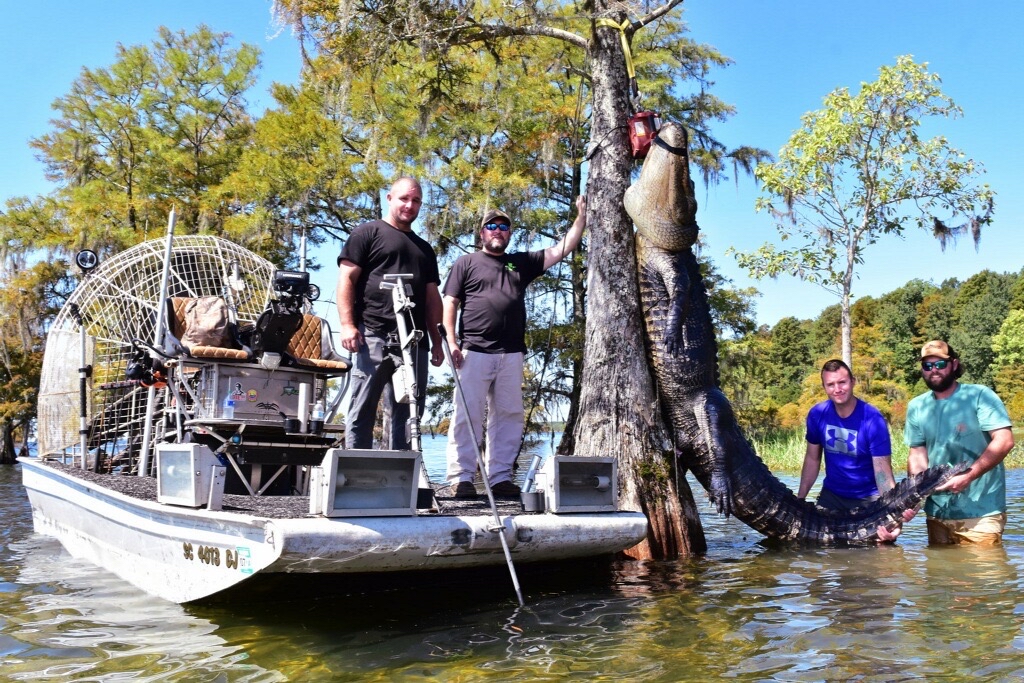 “Due to either fatigue or lack of perspective, it still didn’t register quite how large he was. When I got into the water to try and guide the gator to the tree, I realized just how big he was. We all agreed it was the deepest diving, longest fighting alligator any of us have tangled with. Neeley has taken 13-footers every season — sometimes multiple monsters in a season. This one stood out for sheer mass and size of its fight,” he said.

Thinking back to his 2016 trip when he passed on tagging an 11-footer, Thibeault did the same at the beginning of this trip.

“I caught a lot of grief in 2016 over passing an 11-footer within the first moments of that trip. I held out, and I planned to do the same on this trip as well. A few hours in, the first gator to cooperate with us was between 11 and 12 feet long. I passed again, and my brother questioned my sanity,” he said.

But it was the right decision.

“I told him and Hunter that I would rather burn the tag than settle for a gator that didn’t stand out as exceptional to all that saw him. This time it paid off,” he said.

Wise Choice Outdoors in St. Matthews took care of processing the gator, and taxidermy duties will be performed by Shearwater Taxidermy of Chapin.