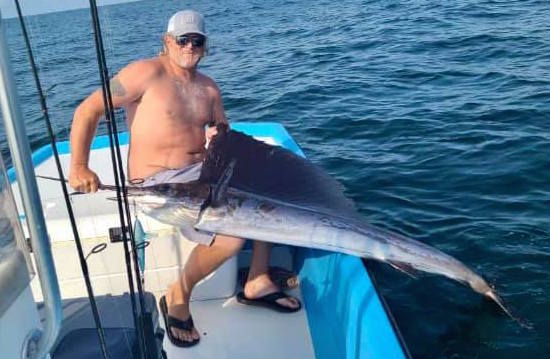 Wayne Lee of Beaufort, N.C. caught an 89-inch long Atlantic sailfish while fishing out of Atlantic Beach on July 25, 2021. And he caught the big fish from a 20-foot skiff.

Lee was targeting king mackerel when the sailfish hit his Blue Water Candy Lures live bait rig that he purchased from Chasin’ Tails Outdoors Bait & Tackle in Atlantic Beach. He was fishing just off the beach in 40 feet of water, and was a little surprised he was able to boat the sailfish.

“It’s the first one that I was able to get to the boat. Most throw the hook when fishing live bait due to the hooks being smaller. But I saw two when king fishing. I just never thought one would stay hooked up,” said Lee.

The king mackerel fishing has been red hot in the Atlantic Beach area for the past couple of weeks. The folks at Chasin’ Tails have weighed in numerous big kings in that time period. Many sailfish move in fairly close to shore this time of year, giving anglers like Lee a shot at a prized bonus fish.

The NCWRC has released the September 2021 workshop schedule for the Pechmann Fishing Education Center in Fayetteville, N.C. […]

Yopp Brothers Marine and Tackle in Sneads Ferry, N.C. weighed in a 35-pound, 15-ounce king mackerel for a customer this week. […]