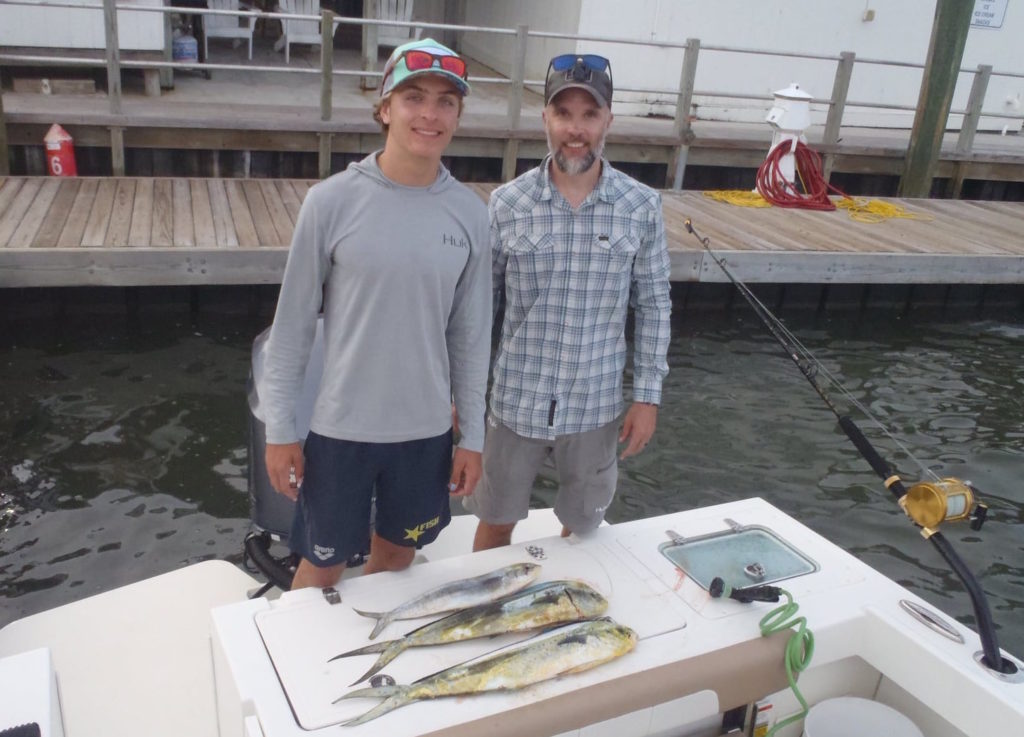 What a day! After a no-show cancellation on Saturday, and watching amazingly calm sea conditions all week, I was itching to get out on the water. I had Kevin and Ben, a father and son crew, coming down for a Gulf Stream trip on Tuesday. After reviewing the forecast trends, I asked if they could bump it up a day earlier.

Fortunately, they were flexible and we made the change. They didn’t have specific goals, but just wanted to catch fish. However, as we chatted, I learned that they really wanted to check a big king mackerel off of their “list.” Also, of course, everyone loves mahi. Anything else would be a bonus.

My plan was to head offshore and stop up short on some ledges about 30 to 35 miles offshore. An important lesson every captain should learn is that you don’t want to overrun the fish. There have been plenty of dolphin within 25 miles, the kings are all over, and I even have a viable report of a wahoo taken in 110 feet of water last week.

We would work the area closer to shore first, and then push off as the day went on. Sea conditions at sunrise showed a rolling, 3-foot swell on long periods. And I was able to make about 29 mph on the ride out without beating anyone up too badly. Reclining in the bean bags back aft, Kevin and Ben had a fairly luxurious trip.

At the first stop, I started out prospecting with a mixed spread. I put a blue/white cedar plug out on the long line, and a pink and green drone on the other side a little closer. On the flat line and downrigger, I put out small ballyhoo with blue/white sea witches. Pulling around 6 knots, the downrigger blowback put my bait somewhere around 20 feet down. The flat line was swimming perfectly in the prop wash. Things looked good.

We had a couple of taps from false albacore, but action was slow. Then the rod with the cedar plug bounced. I looked back to see a big king coming out of the water like an ICBM launch. Sadly, he missed the hookup and never came back. Then things got really slow. There were no birds or other surface action except one small school of flying fish that the boat put up.

After several passes across some of the ledges, and working steadily offshore, I was considering picking up and running when the downrigger went off. It was a screaming run, and my first thought was “big king.” But then I looked back in time to see a sailfish tail-walking across our wake. Of course, I had not turned on the GoPro (I always forget). Fifteen-year-old Ben was on the rod and handled it like a veteran.

The fish ran deep, so I used the boat to help Ben gain line. My primary goal was to get the fish in as quickly as possible so we could release it in good health. It still took some doing, but we were able to get the fish to the boat, remove the hook, and send it swimming into the blue.

That was a great highlight, and I’m glad we had it, because the rest of the day was hot and slow. For a while, the false albacore kept things interesting with short strikes on the drone and cedar plug. And we brought in a handful of barracuda, but we could not seem to find a hungry king. Finally, we started to put up a few bigger flyers. And shortly afterward, Ben boated our first dolphin of the day. Unfortunately, the wind and seas had been picking up steadily. And by the time we got that fish in the boat, I had lost the school. With no surface action and no birds, I could not find them again.

At about 40 miles off, I decided to pick up and run out to the break. Unfortunately, the wind had pushed up a choppy swell. And after a few minutes’ run, I realized it would take us an hour and a half or more of very rough riding to get to where I wanted to go, about 25 miles away. After weighing and trying a couple of other options, I decided the best bet would be to go back to the area where we started.

More dolphins in the fishing report

By this point, the winds and seas were getting a good bit rougher. So intstead of fast trolling, I figured it would be a good time to switch it up and slow troll with dead baits (ballyhoo and cigar minnows).

I was hoping to get these guys their king mackerel — a fish I was sure would be a “gimme” out here at this time of year. Sadly, we never even got a mackerel strike. We did, however, finally get into some schooling dolphin. With the current and wind, it was hard to stay on the school, but we managed to get a couple into the boat and lost a couple of others before things slowed down again.

I finally had to call it and wind in the lines in order to make the rough ride back to Masonboro Inlet and get us home before dark. It was not the most productive day for meat fishing. But it’s not every day you get to bring a nice-sized sailfish to the boat either. Kevin and Ben packed up the truck with tired smiles on their faces. I hope to see them again next year.