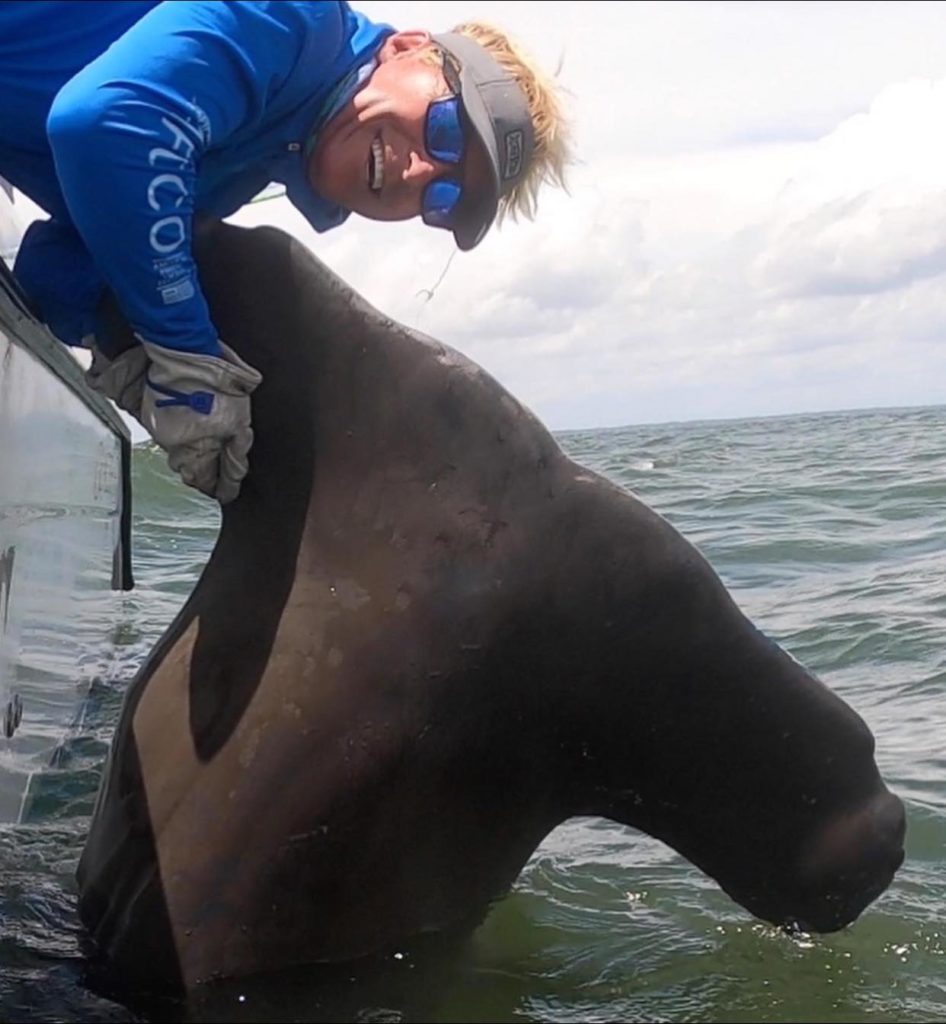 Fishing with Capt. Chip Michalove of Outcast Sport Fishing on July 13, 2022 near Hilton Head Island, S.C., veteran shark angler Pete Quartuccio hooked into a massive hammerhead shark that Michalove is sure would have demolished the South Carolina state record for the species.

Michalove, who has caught many giant sharks in his day, estimated the hammerhead at 13 1/2 feet long and more than 1000 pounds, posed for a quick photo with the shark before releasing it. He said it never crossed their minds to kill the shark just to break a record.

Quartuccio fought the shark until he was exhausted, then passed the rod off to his friend, who reeled the hammerhead in the rest of the way. Michalove grabbed the shark’s massive head for a photo, tagged the beast, then let it go.

“They were so exhausted they could barely stand,” said Michalove. “Pete crashed on the cooler and laid there in exhaustion. And his friend was so tired that I barely convinced him to just hold the camera while I reached over and grabbed the shark’s head for one quick photo.

This big catch was not a chance encounter. Micahlove targeted the massive shark after a close call from it during his charter trip the day before.

Michalove has a great respect for sharks

With bad weather threatening, Michalove decided to stay closer to shore but felt he was close enough that another encounter with the big shark was possible. Things happened quickly once the shark bit.

Michalove immediately released from the anchor and went after the shark.

“I knew she was going to be enormous. But I didn’t know of the enormity until we got her a little closer and I could see the width,” he said.

Years ago, Michalove said he would have dragged the shark in and broken the record. But over his decades of studying, catching and releasing sharks of many different species, he’s developed a respect for them that goes beyond bragging rights.

“These sharks have given me a good life, and they’re important to our fishery. We’ve recaptured so many tigers, lemons, bulls. I owe them everything. I’ve gotten a few messages on how I should’ve dragged her back. But there’s not even a question that we did the right thing,” he said.

South Carolina’s current state record for hammerhead sharks stands at 588 pounds and was set in 1989. The world record 1280-pound hammerhead was caught out of Boca Grande, FL in 2006.

Michalove fishes for numerous species out of Hilton Head Island. Reach him at 843-290-0371 or outcastfishing.com.

Busting bream on the Cooper River

Anglers are catching big numbers of chunky bream in the Cooper River, including bluegills, shellcrackers (and hybrids of the two), and redbreast bream. […]

A shrimp & a prayer

Two friends, Turner aka T and Mr. Valentine aka V like to call this photo “a shrimp and a prayer.” […]

Turn poachers in, get cash reward