For the majority of the year, fishing for speckled trout is a favorite pastime in both Carolinas. However, most anglers believe spring and fall are the only time to catch good numbers and sizes of specks.

This simply isn’t the case.

Speckled trout may not school in the same numbers that you’ll find earlier and later in the year. But like their drum cousins, redfish and black drum, summer schools are more spread out.

Kayaking anglers certainly have no restrictions on places to catch summer speckled trout. In fact, some of the best spots will be shallow areas heavily inundated with rocks, oyster bars and grass flats that make the going pretty tough for larger vessels.

Fishing from a kayak doesn’t necessarily affect when, where and how to fish for speckled trout, but there are a couple of considerations that might help you catch more fish.

The first is that the lower profile of a kayak is much less likely to spook trout than a noisy outboard. Make sure your boat is equipped with both a good trolley type anchoring system and a stake-out pole. In some circumstances, you may want to also carry an anchor sizeable enough to hold the boat still if fishing an area with moderate current. Speckled trout are very fond of both heavy structure and current seams or rips, for example, where two ditches meet or where a smaller creek empties into a larger flow of water.

Plan to start your trip early in the morning and allow yourself time to unload and paddle to your fishing area before sunrise. Trout can be caught throughout the day in June — or at least until the water temperatures peak. But the early morning and late-evening bites are going to be the best.

An ideal situation would be a falling tide with the rising sun, with the tide just starting to move at sunrise. A long stretch of oyster bar, rock bed, riprap or other hard structure will have trout rushing up into skinny water to feed before the water backs off.

The hands-down, go-to fishing lure in this situation is a topwater bait. Throw the bait up on top of the submerged structure and skitter it along with a moderate retrieve. The color is not as important as the bait’s action. Some days, the fish will want a noisy bait that moves a lot of water. On other days, they’ll hammer a bait that more closely mimics jumping shrimp or mullet trying to elude predators.

Because there will only be so many days that rising sun and falling water coincide, try working the topwater bait perpendicularly to the structure if the water is already down. Or throw a swimming plastic bait or shallow-diving stickbait that imparts a fair amount of action if the water is covering the structure by more than 3 feet.

Fishing current rips and seams would be the fall-back position for the kayak angler after the sun has risen and the day begins. Expect trout to retreat from the skinny water to 6 to 10 feet of water.

To effectively fish a seam or rip, position your kayak where you are located a half-cast below the intersection. This will allow you to work above and below the seam without having to reposition the boat.

Speckled trout tend to hold on one side or the other of the seam. So four casts is the bare minimum to decide if something is home or not. Concentrate on the upper outside, the upper inside, the lower outside and the lower inside of the seam while casting a soft plastic bait rigged on a 1/8- or ¼-ounce jighead. You might want to cast eight to 12 times to work the upper, middle and lower sections of the water column.

Another good option for working a rip or seam is to use a popping cork to suspend a live shrimp or plastic imitation. Start by casting the bait above the rip and let the current carry the cork and bait where it will. Pop the bait a couple of times before, during and after the cork moves from above to below. And make sure to work each side of the seam.

All topwater lures are different, based on the overall shape of the bait and the design of the head. The action is what tells the tale. And these can be broken down into two major categories: baits that chug or pop on the retrieve and baits that wiggle back and forth. Both have their places for catching speckled trout. But most anglers agree it’s the wag that catches more fish. Perhaps this is why the best retrieve cadence for these baits is known as “walking the dog.” 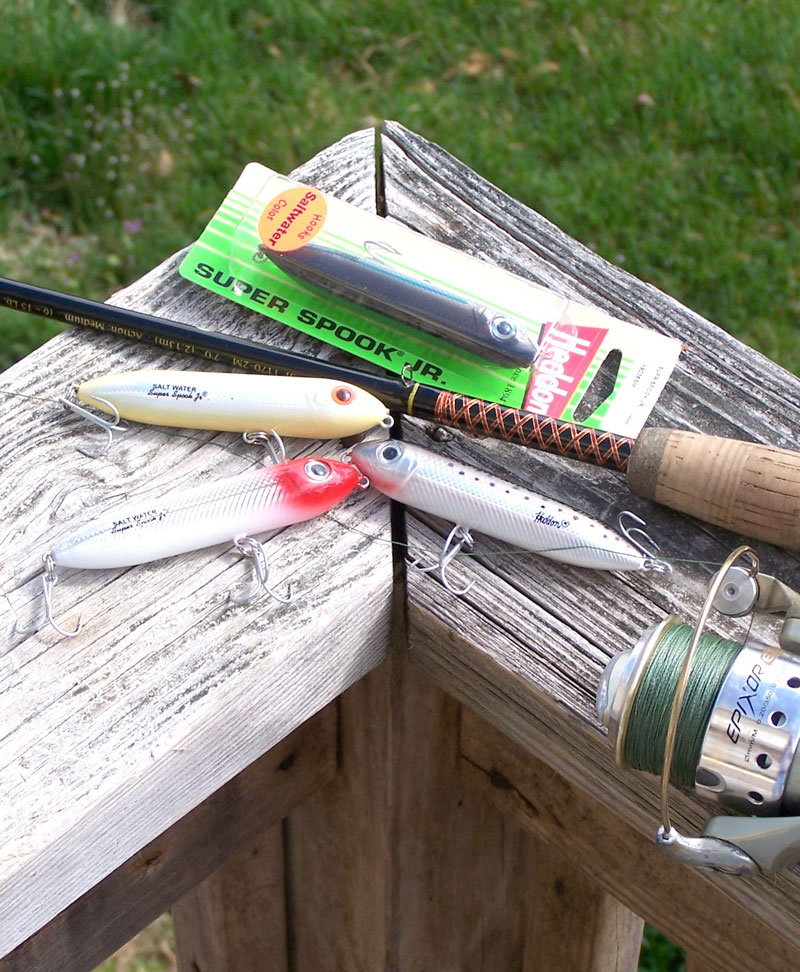 To walk the dog, let the bait settle in the water. Keep your rod tip low and to your left, unless you are left-handed. Continuously twitch the rod tip straight back during the retrieve, allowing just enough slack to let the bait move naturally.

Vary the speed of the retrieve until you find what works best. In cooler water, dormant fish may bite best with a slow retrieve. In warmer water, active-fish situations, speed it up.

Always, always work the bait all the way back to the boat. Specks are notorious for following a bait right up until the time it might get away before striking. Speaking of strikes, don’t jerk the rod on anything you see in the water. Always wait until you feel the fish on the line before setting the hook.

If you get several blow-ups without hooking up, throw back with a weighted plastic bait and retrieve at a steady pace just below the surface.

HOW — Target speckled trout in the current seams or rips near shell islands and creeks on rising and falling tides.

LAUNCH — The lower portion of the Cape Fear River is accessible from numerous access points from Wilmington to Snow’s Cut on the east side of the river or to Southport on the west side of the river. Go to https://www.ncpaws.org/ncwrcmaps/boatingaccessareas

INSIDER TIP — The jetty known as “The Rocks” near Fort Fisher is a good area to find current rips and speckled trout in the summer.

HOW — Look for oyster bars that are submerged near the top of the tide. Cast topwater baits over the tops of the bars and work them off the edges.

INSIDER TIP — Look for live oyster bars, which are dark, jagged, and look like rocks, versus dead oyster shell which will be bleached out white and is often piled up along larger waterways from dredging or current wash.

Winter is a great time for catching a mixed bag of inshore fish along the Lower Cape Fear River. […]

Specks, reds, black drum in Murrells Inlet all have shrimp on the brain in December. […]

About Phillip Gentry 772 Articles
Phillip Gentry of Greenville, S.C., is host of “Upstate Outdoors,” a weekly radio show that can be heard on Saturdays at noon on WORD 106.3 FM.