Kayak fishing is a year-round sport

Kayak fishing is not only the fastest-growing fishing sport, it’s also a year-round sport. Those who think only die-hard kayak anglers fish during the winter are missing out. It’s not even necessary to face Mother Nature head on.

With some forethought and planning, kayak fishing can be just as enjoyable in winter, and a whole lot more productive, than summer. Whether you’re a pro or just getting started, here are a few tips that will help you catch fish and catch more fish during the cold months.

Dress warmly. You’ve already heard and read of this ad nauseum, but it bears repeating. If you stay warm and dry, you’ll be happier and fish longer and catch more fish. Drysuits, dressing in layers, even full-body wetsuits or neoprene waders — whatever you’re comfortable in — put together the ensemble and wear it. Keep a spare set of clothes handy in case the dry part doesn’t work out by the end of the day.

Be safe. Again, you’ve heard and read this ad nauseum, but for good reason. Wear your PFD, file a float plan, fish with a buddy, stay within your limit. Live to paddle another day.

Scout in advance. Scouting for fishing? The best freshwater fishing is going to be in deep water; the best saltwater fishing is going to be in shallow water. Find these places on topo maps and charts before fishing. Locate suitable areas adjacent to hand-carry launch sites. Check the wind and weather forecast and choose your fishing spots accordingly. The sun and deep water adjacent to the shore are your friends.

Fish later in the day. Give your fishing area time to warm up. Some of the best winter fishing is mid-day and afternoon after surface water temperatures have risen a few degrees.

Don’t be in a hurry this time of year

Slow down. Avoid the urge to run-and gun in cold water. Most fish will school or school tighter in the winter. The key to catching them fish is first locating them, then taking time to work them slowly to entice strikes.

Use a depth finder. Unless you’re sight-fishing a shallow flat, most winter fishing is going to be vertical, over deeper water. That requires the use of a depth finder, both to identify baitfish, predator fish and yes, even watch your bait as you vertical fish.

Vertical is best. Most of these scenarios work best when vertical fishing for your chosen species. Get on top of the fish. Watch them on your sonar and learn to use a jigging spoon, drop-shot, shaky head, bucktail jig or other heavy, metal bait. These styles of fishing might be slow and boring, but they catch a lot of winter fish.

Use braided line. Fish bites in cold water are mushy at best. Using braided line lets you feel them better. If you are concerned about line shyness, use a length of fluorocarbon leader.

Remember topwater baits. Sometimes the area of warmest water is that sunbaked layer on the surface. Even in cold water, baitfish are often pushed to the surface by feeding fish, and topwater baits are the best way to get bit. Rarely is blind-casting topwater baits effective like it is in the summer. If something is going on at the surface, you’ll see it first, then cast to it.

The magic temperature when fishing in the winter is 50 degrees. In mild winters, water temperatures may not get down to 50 or may not stay less than 50 for very long. In hard winters, 50 comes and goes like a crisp fall day, leaving icicles in it’s path.

Both freshwater fish and saltwater fish will feed actively in water warmer than 50 degrees, although it may be for shorter periods of time because their metabolism is slower. Less than 50 degrees, and you need to plan on soliciting a reaction bite. That rarely means a fast and furious presentation, but more likely that annoying “in your face”, “easy to get”, “too good to pass up” appeal. That’s where jigging spoons and drop shots and the like shine. The kayak angler is set up over the fish and is putting that bait on its nose.

As well as live bait works most of the time, both live bait and the predator fish you’re after become lethargic less than 50 degrees and dead less than 40.

It is not unreasonable to plan your fishing around water that stays warmer than 50 degrees throughout the winter. This might be artificially generated by water releases from dams or power plants or naturally occurring on mud flats, out of the wind and super-heated by the sun.

While much of this is simply fishing knowledge, the kayak angler can take advantage of unique opportunities to find heated water because of access and portability. The extreme upper end of  a reservoir may be much warmer than the impoundment end, and a cut-off slough may warm faster and stay heated longer than a normal tributary arm. The same can be said for shallow saltwater flats that lie upstream behind two or three sand bars that keep the dolphins and power boats at bay.

LAUNCH —  Parking and public access areas are available at the station sites.

INSIDER TIP —Most anglers cast fish imitating lures to schooling fish located by watching diving birds. While doing this, free line a large live shiner behind the boat to pick up stragglers.

WHERE — Flats and marshes on either side of Intracoastal waterway, from Little River to Savannah

HOW —  Target reds on low water at the entrance to drains and creeks off these flat areas by casting live and small artificial baits out in front of schooling fish.

LAUNCH — Public launch sites are scarce, especially to remote areas that don’t get fished. Do your homework and find mostly private or semi-private areas to launch if you want to get to unpressured fish.

INSIDER TIP — Use scents like pro-cure on artificial plastics in the winter. The baits don’t have to move much to get bit. Smelling like something to eat works wonders. 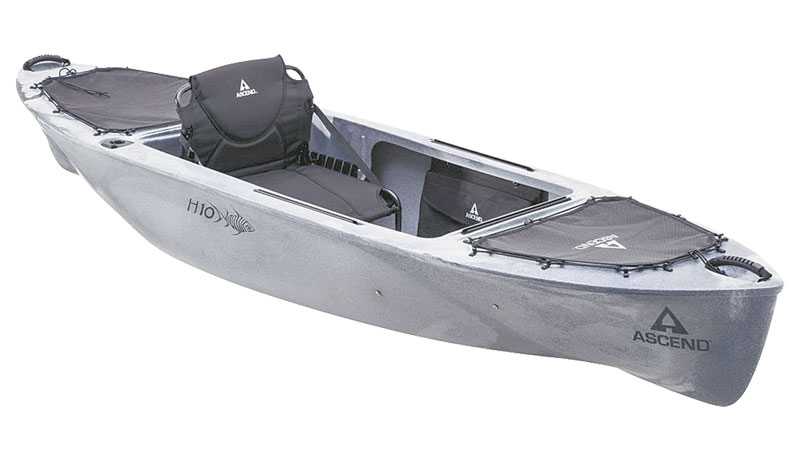 With the toughness and space to handle overnight excursions and the maneuverability to keep short trips long on fun, ASCEND’s H10 hybrid kayak is ready for all your on-the-water adventures. The tunnel-style hull provides stability for stand-up convenience. The stepped keel lets you punch through the surf or glide effortlessly on top of glassy lakes.

Integrated soft-sided saddle bags provide ample space for your gear and accessories. Adjustable foot braces fight fatigue so you stay comfortable. The open deck design doesn’t get in the way of your angling, and the large cockpit makes it easy to get in and out. Accessory rails allow simple installation of after-market gear. A bow hatch and bungee cargo ,along with a stern cargo area with a mesh cover allows lots of space for gear. The H10 is 12 feet long by 31 inches wide and weighs 55 pounds. 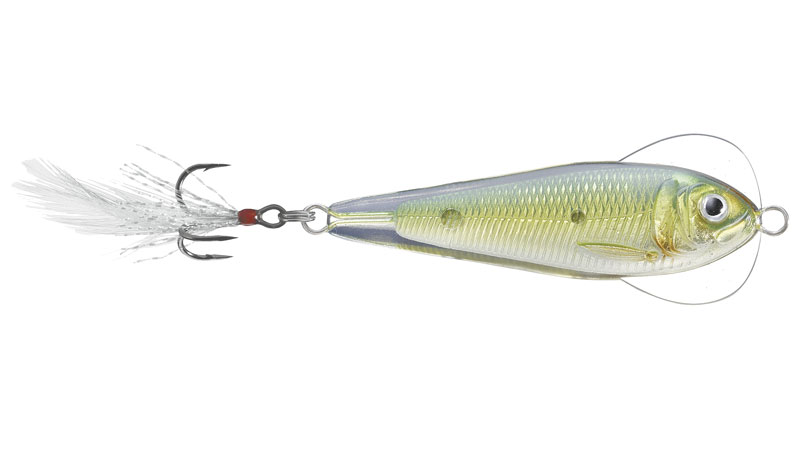 Giving your jigging presentation a whole new level of realism, the LIVETARGET Flutter Shad jigging spoon offers a highly realistic finish that will get you more bites and put more fish in your livewell.

Delivering an anatomically accurate profile, the Flutter Shad is crafted using LIVETARGET’s injected core technology, which enables the inner-core to host a lifelike shad silhouette with a metallic finish and produce a strobe-like flash that shines incredibly bright to attract fish. It also features a durable exo-skin that generates its signature finesse fluttering action on the fall that no bass can resist.

Ideal for any vertical jigging scenarios, the Flutter Shad can be used with a lift-and-drop technique to produce a tight shimmy, and it can also be snapped off the bottom to impart an erratic twitching action that triggers aggressive strikes. Complete with a rear feathered treble hook, the Flutter Shad is available in the most life-like colors ever developed in a jigging spoon.

Numerous Carolina inlets feature rock jetties that are magnets for a huge variety of fish during the hot summer months. […]

WMAs for deer and turkey hunting are found in various shapes, sizes and management schemes. Charles Ruth, SCDNR’s deer and turkey program coordinator, said his choices on deer and turkey for 2020 actually are the same WMAs, but for different reasons. […]