Look for an article about kayak fishing and most likely you’ll find photos of a plastic boat on the water on a warm spring or summer day. While warm weather kayak fishing is great, it’s still hard to beat the cooler months for finding hot fishing action from a kayak.

One big reason is that waterways tend to be less crowded, meaning less boat traffic and less competition. Oftentimes, a kayak angler may have an entire area without another boat in sight. Cool weather fishing this month will require some cold weather gear but maybe not the stuff you’ll have to wear if it were February. It’s not uncommon to find daytime temps in the 60s across the Carolinas, and that’s not bad.

On big water freshwater impoundments and open water bays and sounds in the salt, striped bass are a more-than-worthy quarry for December. Due to their cold North Atlantic nature, striped bass feed heavily in December before water temperatures dip too far.

The stocking of striped bass in freshwater reservoirs in both Carolinas has created some great fisheries for all anglers. During the month of December, maybe more so than any other time of the year, striped bass will pursue baitfish relentlessly to stock up on fat reserves.

Because the water column will be nearly the same temperature from top to bottom and in both shallow water and deep, striped bass, and hybrid striped bass in those reservoirs where they are stocked as well, tend to gravitate with the bait and in places where it’s easiest to ambush prey.

Long points and humps are usually at the top of the list for locating December stripers. And on a typical Carolina reservoir, it’s best to start in the mid-lake area rather than moving to either extreme to find fish.

Shore and sea birds are your best friends this time of year. Seagulls, terns, loons and cormorants will have done the aerial reconnaissance ahead of time so watch the areas where those birds are feeding to help refine your search.

For this reason, bridge crossings and other man-made structures are good places to look for coastal striped bass. The abundance of striped bass in coastal rivers currently doesn’t match what you can find in freshwater reservoirs, so pay attention to small details if you see or hear of striped bass being caught.

The typical migration run for coastal striped bass is toward the sea but not into the open ocean, so the lower reaches and inlets or coastal rivers is a good bet. In North Carolina, some sea-run fish may move between nearshore areas and inshore bays. So the closer to an inlet you are, the better your chances of locating fish will be.

The best baits for coastal striped bass will be on an available basis, so look for them to feed on crabs, the few remaining shrimp in the area, and by-catch species like pinfish and minnows.

WHERE — Croatan Sound. Fish the two Hwy. 64 bridges behind Roanoke Island in the sound.

HOW — Cut bait or down rod the bases of the bridges using pinfish or crab. You can also cast a curlytail grub between the pilings. Moving water from wind or tide works best. Additionally, stripers will hit crankbaits in chrome or blue.

LAUNCH — Launch beside the bridge at Manns Harbor to fish the two bridges.

HOW — Freeline a couple of large shiners behind the ‘yak while casting noisy topwater plugs or bucktails to schooling fish in and around the backs of creeks. Few anglers use down rod presentations for striper from a kayak, but they may be missing out on some great action.

INSIDER TIP — Seabirds — gulls, terns and loons will give away the location of baitfish near the surface. Striped bass are usually somewhere in the area.

One of the most commonly utilized striped bass fishing tactics is the use of a down rod, vertical presentation of live bait over an area where striped bass are holding. Down rod fishing is primarily used from a power boat, but can also be a deadly strategy from a paddleboat.

The most popular rig for down rod fishing is a Carolina rig. The main line from the reel is attached to a barrel swivel. Above the barrel swivel is threaded a weight heavy enough to hold the bait in a vertical presentation. 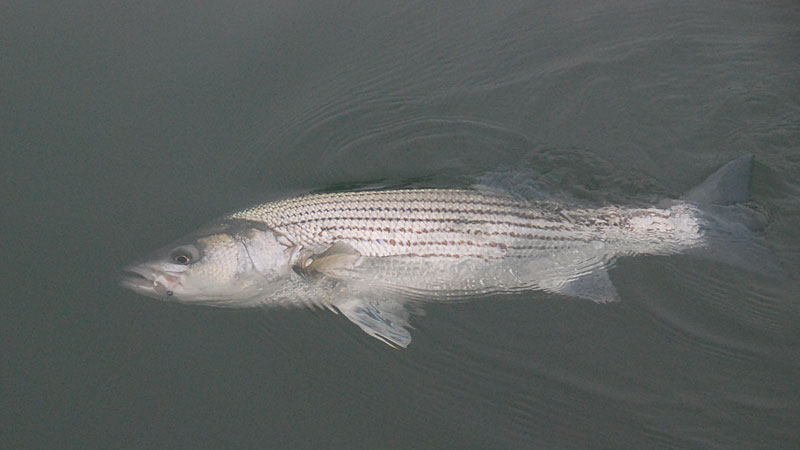 An effective down rod presentation is to graph fish that are thought to be striped bass on your depth finder before setting out rods. Using a down rod is a great way to multi-task for stripers when you are casting off the front of the boat.

If striped bass are not holding tight to one location but are in the general area then it is often preferable not to anchor the boat and just drift with the wind or current through the target area. An occasional paddle or peddle stroke will keep the boat moving with the fish you see on the graph.

Depth presentation is the key to down rod fishing. It’s helpful to note the precise depth the fish are using and deploy a couple of baits at or just above this depth. If space is available, placing a bait 10 feet below the level active fish were marked may entice a larger more solitary striped bass that often hangs out below and off to the side of an active school.

One of the most common mistakes striped bass anglers make when fishing down rods is to set baits out at a specific depth and just leave it. Being a vertical presentation, fish moving right below the kayak will be, within the transducer cone angle of your depth recorder. Constant monitoring of the depth finder and readjustment of baits to the level the fish enter the cone at will greatly increase your chances of hooking up fish.

Bear in mind that a school of striped bass is a very competitive atmosphere. While it may take a little time to convince that first fish to take the bait, often times once a fish is hooked and fighting the line, other stripers will move in out of instinct as the erratic movements of the hooked fish will signal feeding to the others.

Don’t shy away from taking long shots with today’s muzzleloaders. […]

Spooning for stripers on Lake Murray

Deer hunting can get tough in the late season, but you’ll bag your last minute buck with these tips. […]

About Phillip Gentry 789 Articles
Phillip Gentry of Waterloo, S.C., is an avid outdoorsman and said if it swims, flies, hops or crawls, he's usually not too far behind.