While the July weather has been scorching at times, recent rains have cooled some days. But even in the hottest weather, the fishing report has remained strong across South Carolina’s freshwater waterways.

Capt. Jason Wolfe said striper fishing at Lake Wateree has been like a Chinese fire drill, with his clients catching as many as eight at a time, even with only three or four anglers in the boat.

“We’ve had all eight rods go down multiple times lately. And believe it or not, we almost always land all eight fish,” said Wolfe, of Wolfe’s Guide Service.

He credits his Catch The Fever Striper Stealth rods, which are strong enough to hold those fish on, but flexible enough to keep the fish from straightening or breaking his hooks. 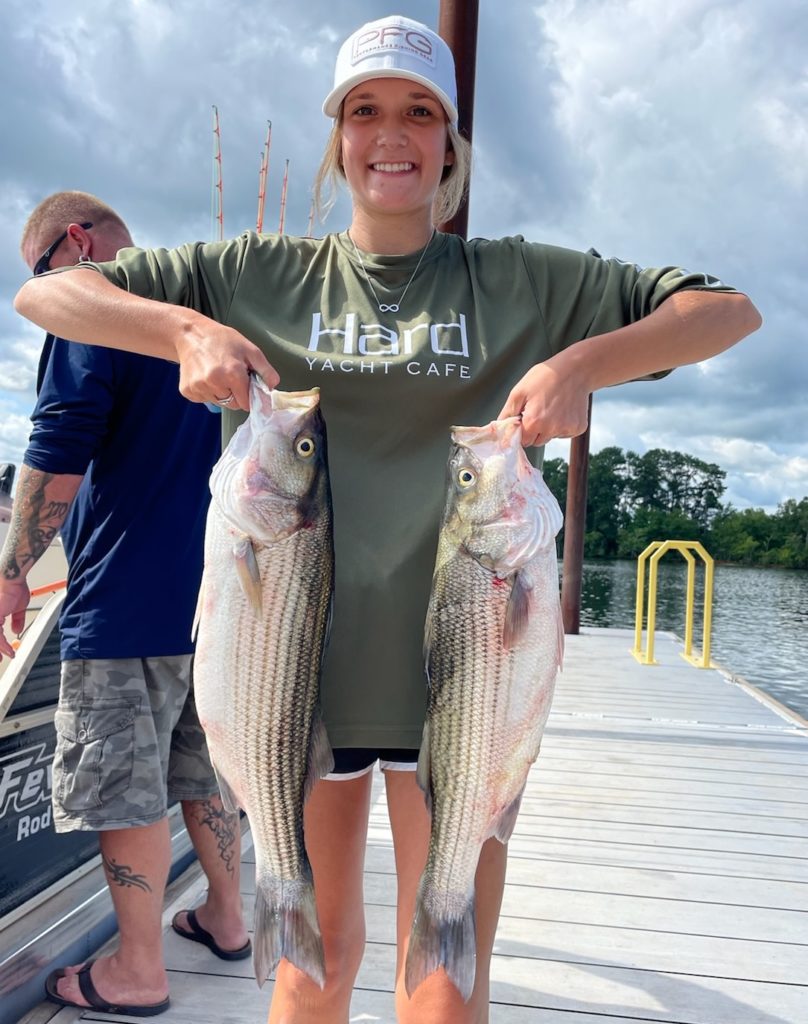 With the hot weather, he suggests anglers get on the lake as early as possible. Live bait has been highly effective. He baits the hooks, casts, places the rods in rod holders, then tells his anglers to be ready. Drifting or trolling has been effective, and sometimes anchoring does the trick when marking a lot of fish on the depth finder.

“Early is the time to go. On some days, we get a few frenzies, which often results in our limit. But once the temperature really heats up, the bite can shut down hard,” he said.

Matt Outlaw with Outlaw Outdoors Guide Service continues to keep his anglers on plenty of crappie, including some hefty ones at Santee. He’s catching a lot of these fish in deep water using the Live Scope feature on his depth finder.

Outlaw has been using a spread of long Precision Crappie Rods from Catch The Fever, finding the fish on Live Scope, then slowly easing his boat into position to put his jigs and minnows in front of the fish. 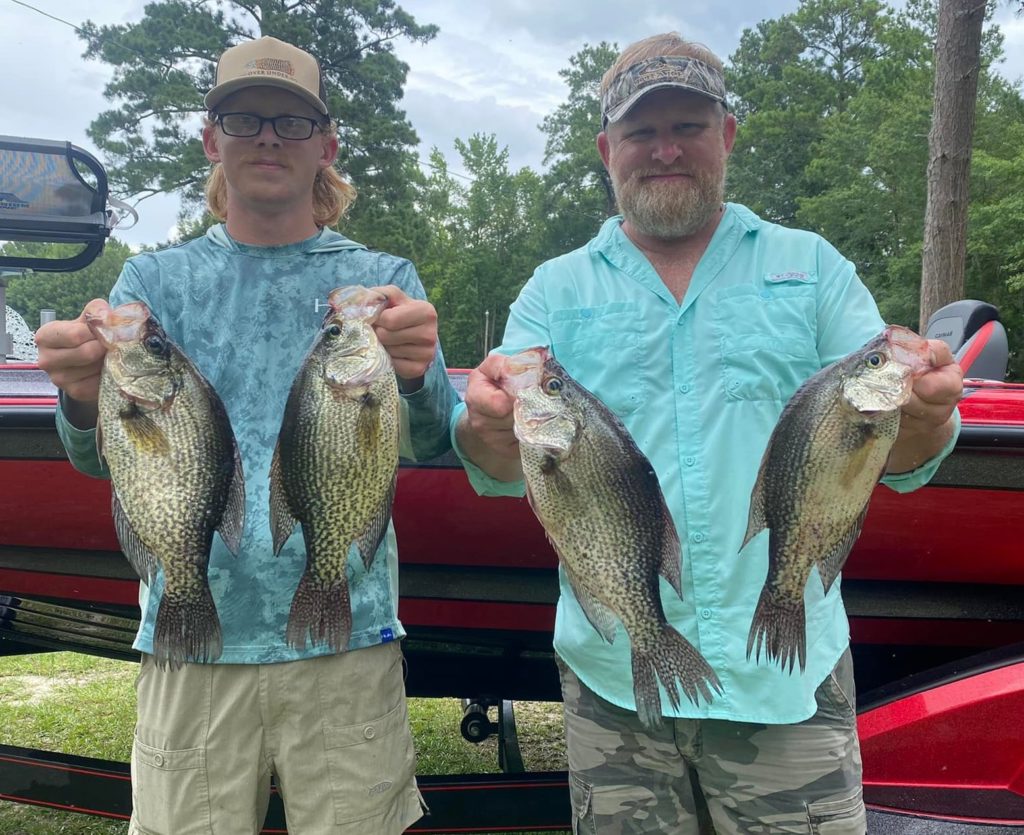 The crappie that are coming from deeper water don’t seem to mind the day’s heat, but it’s always easier on anglers to get out during the early morning hours. Outlaw’s anglers are limiting out on many days and he expects the deep water bite to remain strong for the foreseeable future.

In the Upstate, Sam Jones and Casey Jones of Jocassee Charters are finding some good trout for their anglers on Lake Jocassee. On one of their recent charters, youth angler Ollie Morgan boated a 6.4-ounce, 23-inch brown trout while trolling a lure coated with Shad Fire Gel in 85 feet of water. 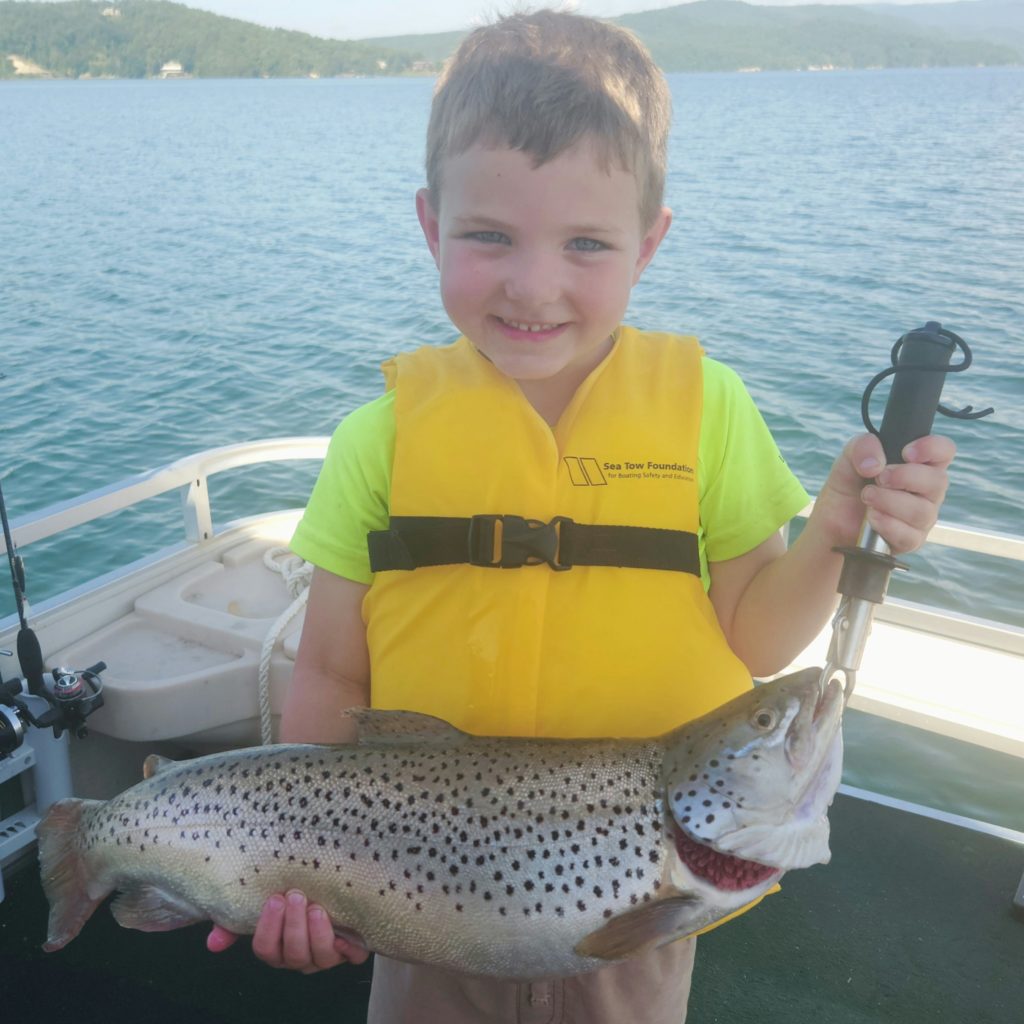 Earlier this month, they guided a grandparent/grandson crew that had a big day with Grandma catching a 5-pound, 20-inch brown, and grandson kicking things up a notch with a 7-pound, 24-inch brown.

They have been putting their clients on plenty of other browns and some rainbows, mostly by trolling in fairly deep water. Several anglers have been recognized by SCDNR’s Angler Recognition Program this summer for fish they’ve caught with Jocassee Charters.

On Lake Murray, many anglers are limiting out on stripers in the first hour of daylight. And other anglers are finding them throughout the day. Many “community holes” are crowded early, but it doesn’t seem to stop anyone from catching their share.

These fish are thick in numerous locations on the lake, so knowing your depth finder and trusting what it’s showing you is a big part of staying on them. They move constantly and can be thick as thieves in an area one day, and in another part of the lake entirely the next day. 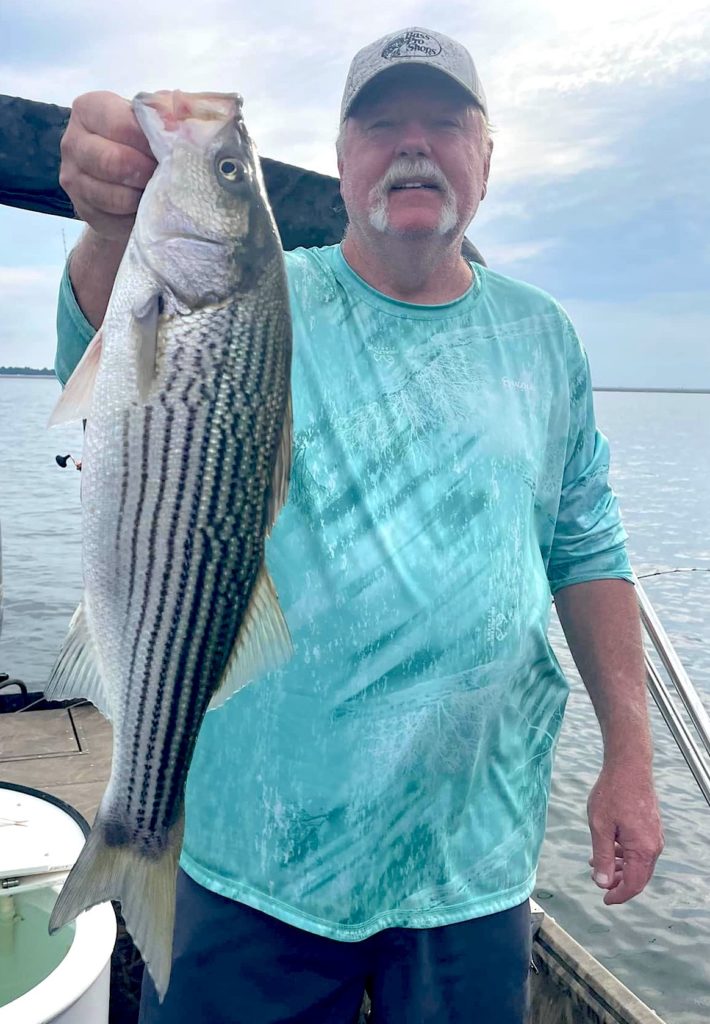 If you’ve been keeping the rods stored away to avoid the heat, you’re missing out on some of the hottest fishing of the year.

During December, Santee Cooper offers a smorgasbord to anglers willing to brave the cold. […]

The NCWRC is stocking 60,000 surplus trout in 40 small impoundments across central and western North Carolina. […]

Several lakes in the Carolinas produce slab crappie during December. […]