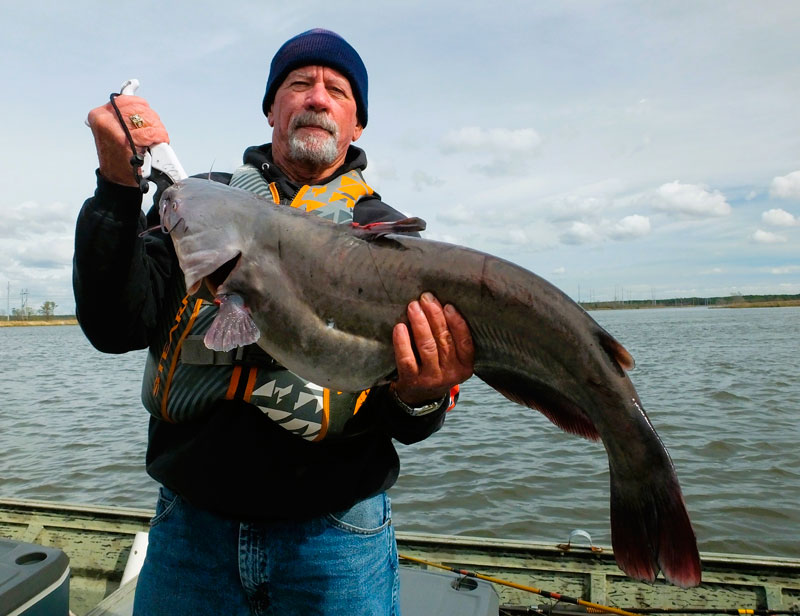 February can begin cold and nasty, but it heralds the promise of better fishing to come as the water temperature rises. Typically, the bite for several species perks up as the month progresses. Crappie and largemouth bass are two favorites worth pursuing. But don’t overlook catfish, because plenty of the big, blue catfish on Santee Cooper become a bit shallow-water minded to always be in deep water this month.

February launches the spring largemouth bass fishing for many anglers. And bass offer productive fishing and an ever-improving, big-fish bite as the month progresses.

Early February bass action may lack consistency. But the trend of warming water puts bass on the move. Rising temperatures, combined with a warm rain, will typically improve the bass action dramatically. On exceptional years with plenty of warm weather, some scattered bedding action can occur according to veteran anglers.

But even if spawning doesn’t take place this month, fishing the shallow water pre-spawn areas is a good bet to find big bass by mid- to late-February.

Multiple lures produce good results but the versatility of spinnerbaits makes this an excellent choice throughout the month. Soft plastics and crankbaits are popular options. The variety of targets include stumpy shallow humps in flats or creeks, bends of creeks, and shallow water targets including stumps, weeds and brush.

Catfish can be a two-fold adventure during February with plenty of catfish found in deep water along the ledges and humps in both lakes.

This is a good month to catch big catfish, as well as respectable numbers. Early in the month a lot of forage is found 40 to 50 feet deep. And drift fishing is the preferred method for these deeper fish.

Most anglers work the slopes from humps leading to deep water to find the best depth for the day. And that depth is influenced by where forage is found.

But local catfishing guides also know that not all catfish will be deep this month. Anglers fishing shallow water humps, as well as flats in the backs of creeks and coves will make excellent catches this month.

The key in these cases is to find where forage has filtered into these shallow water areas. Once you find forage, scan the area with electronics to ensure big fish are present. Most guides recommend that if fishing less than 10-feet deep, an anchored setup is usually preferred over drift fishing.

Fan cast multiple rigs around the boat and give the area 30 to 40 minutes to produce. If no action occurs, move to another area.

Also, the Cooper River has an outstanding population of catfish and this month is productive for catfish action here. As in the lakes, big cats can be found in the deep holes, but also in much shallower water near ditches that lead into forage-filled flats.

Gizzard shad and blueback herring are two prime baits for most catfish anglers, with cut mullet another excellent choice.

Crappies begin their move toward the shallows, and while the process takes several weeks, excellent fishing for slabs is a high-profile fishery during February. The major push to the shallows typically occurs during March. But by searching for crappies staging in slightly deeper water, anglers can find big, roe-laden sows in water 10 to 20 feet deep.

Crappie experts on lakes Marion and Moultrie report that some of the largest crappie of the year can be taken during February working these mid-depths to shallow water.

Crappie anglers fish brush and woody cover in both lakes this month. Two basic fishing techniques produce consistent action. One is the tightline rig with jigs, minnows or a jig/minnow combo worked over and around and even into the brush. The second is to anchor just off the target and cast jigs to the target, counting down the jig to the desired depth, then slowly retrieving the lure.

Another tactic is to long-line troll, which becomes even more productive in late-February and into March.

Anglers can pinpoint large concentrations of crappie this month, but it often requires multiple setups before finding that area where crappies are stacked up.

Ditches offering a quick deep- to shallow-water route are another excellent choice for big crappie. The ring of shallow water around Lake Moultrie is laced with many canals and slightly deeper ditches, providing this close-quarters, vertical access to several feet of water. Big crappie will stage in these areas during February.

February is typically the coldest month of the year, but it’s also a transition month, with the water beginning to heat up as March gets closer. That means many fish are on the move toward shallow water, so anglers should do the same.

Don’t wait on the warm weather of spring, the Waccamaw River crappie bite is on right now. […]

About Terry Madewell 759 Articles
Award-winning writer and photographer Terry Madewell of Ridgeway, S.C., has been an outdoors writer for more than 30 years. He has a degree in wildlife and fisheries management and has a long career as a professional wildlife biologist/natural resources manager.