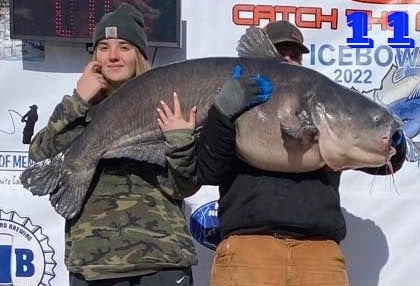 Bill Sutton of Pittsboro, N.C. was fishing with his daughter Georgia Sutton this past weekend on Kerr Reservoir/Buggs Island when they landed a 112-pound catfish. The big catch couldn’t have come at a better time. They were fishing in the annual Icebowl Catfish Tournament when the fish bit.

Check out the Icebowl Catfish Tournament Facebook page for a video of the weigh in and awards ceremony.

Jigging and trolling for Gaston’s stripers

Stripers, including trophy-sized ones, bite like mad at Lake Gaston in November. […]

Kim Potts of Oxford, NC killed a huge 17-point buck in Granville County that has been green-scored at 146 7/8 inches. […]

Drifting is a great way to catch Lake Moultrie’s blue catfish, including some big ones, in November. […]