July is productive for multiple species of fish on the Santee Cooper lakes, Marion and Moultrie, for anglers with the right game plan. Summer patterns are now solidly in place. But anglers must diversify their tactics to make big catches.

The largemouth bass bite is good during July, but it requires different tactics than the spawn and post-spawn periods. Guide Brett Mitchell said bass are on specific, hot-weather patterns.

“The early morning bite can be excellent with actively feeding fish in that low-light time period,” he said. “Baitfish are shallow, and the bass will be foraging so getting out early is crucial.”

He said that low-light periods in the early morning and late evening are tops for surface or shallow-water action. A variety of lures produce, but he likes buzzbaits, Pop-Rs, walk-the-dog lures, crankbaits and spinnerbaits.

Mitchell (803-379-7029) said the best locations are usually flats near slightly deeper holes or drops. He’ll often focus efforts in shallows that are close to water depths in the 5- to 7-foot depth range

“The topwater action where bass roam away from the dense weeds to feed doesn’t last long but we can pick up some quality fish early,” he said.

For fishing during the mid-day, he said to work along edges and drops with heavy, weedy cover or the edges of drops littered with stumps and woody cover. Some of the best lures include creature baits worked such as soft frogs as well as soft plastic bottom bumping lures.

Mitchell said casting accuracy is a key to mid-day summer fishing because the bite zone target is often tiny.

“I fish both lakes during the summer, and depending on conditions I may be fishing either Lake Moultrie or in the upper end of Lake Marion,” he said. “I diversify my targets to stay on good bass action at this time of the year.”

Crappie fishing is consistently productive during the summer because they’re locked into deep-water patterns. Deep brush piles, public fish attractors as well as natural cover including stumps and logs along drops and ledges attract and hold crappie in good numbers.

Guide Steve English fishes both lakes at this time of the year. He said a depth range of 15 to 35 feet can typically be productive.

“One good target is underwater brush at the base of a drop,” he said. “Live minnows or jigs produce fish. I’ll maneuver my boat over the top of the targeted cover and fish vertically. I use long poles with sensitive tips so I can see even the slightest bite of a crappie. I rely on electronics to get me directly over the deep brush or fish attractor.” 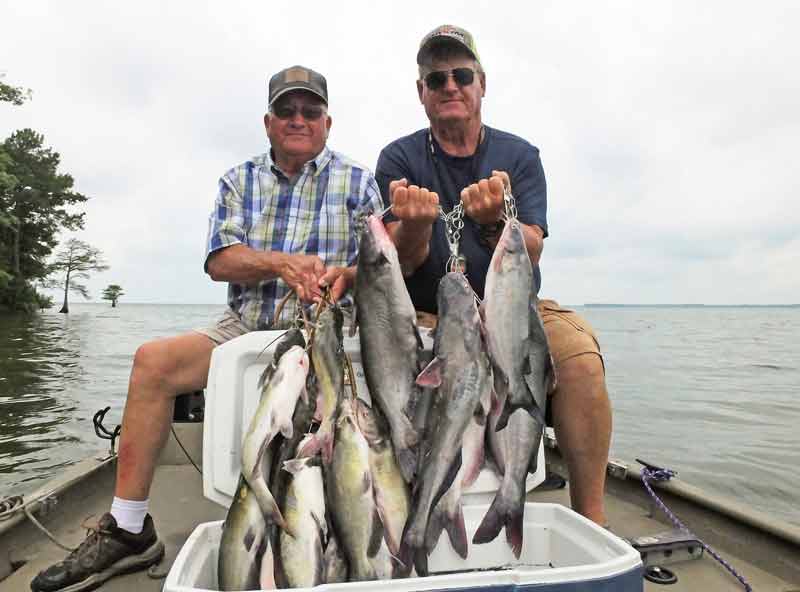 “Fishing deep-water brush can be a test of patience. Sometimes, we’ll catch a few fish on multiple brush piles, and that adds up to a good catch,” he said. “But often, we’ll hit one that’s loaded with fish, and the action is crazy-good.”

English said finding the productive depth for a particular day and targeting that depth can be the key to catching limits of crappie.

Catfish action is excellent during July, with big catfish found from 10 to 40 feet deep around the drops and humps, as well as the mussel beds scattered throughout both lakes.

Drift-fishing is the primary tactic for most anglers in the main body of both lakes. Productive depths can change the basic process to drift along humps and ledges, covering various depths of water. Most experts will use multiple rods, with some rigs fished on planer boards to achieve a wide spread and cover more water. Once you define a productive pattern, work that pattern.

Moving water is another major attraction for catfish, and the Diversion Canal is a prime place to find consistent current flow in July.

Fishing the Diversion Canal is productive around the clock; by day, most fishing is drift-fishing with the current flow. At night, anglers usually anchor fish. A variety of catfish are caught, with blues, flatheads and channels all part of the creel in moving water.

Diversify your catfish tactics to include using stinkbaits or small chunks of cut bait on light tackle near shallow flats close to deep water to find fast action on a mixed creel of channel and blue catfish. Fish the low-light and lower heat, portions of the day for best results.

Ryan Conte was fishing at Buggs Island (Kerr Lake) in mid-June 2022 when he caught this catfish. […]

Santee Cooper’s fish move toward their summer patterns as the calendar turns to June. […]

Courtney Joyner was on babysitting duty on the Wateree River when she caught a 47.5-pound flathead catfish in May 2022. […]

About Terry Madewell 742 Articles
Award-winning writer and photographer Terry Madewell of Ridgeway, S.C., has been an outdoors writer for more than 30 years. He has a degree in wildlife and fisheries management and has a long career as a professional wildlife biologist/natural resources manager.