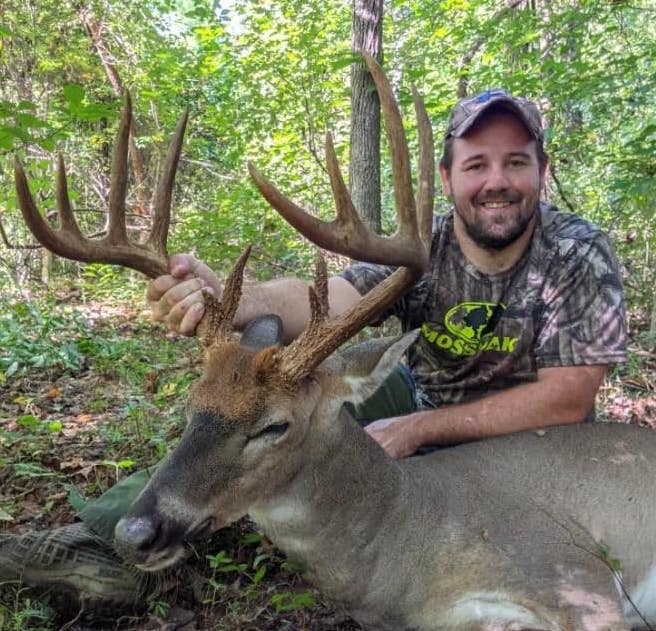 Zack Porterfield of Roxboro, N.C. killed a split-brow 12-point buck on the evening of Sept. 11, 2022. He shot the buck in Person County from 25 yards away while sitting in a ground blind overlooking an open area in the woods.

The deer began showing up on Porterfield’s trail cameras in July. Luckily, it stuck around until the second evening of North Carolina’s archery season.

“He came in during last shooting light. He was quartering to me a little, and I tucked it behind the shoulder and shot,” said Porterfield.

His arrow had a Lumenok lighted nock, so he was able to see the direction the buck ran. After a quick search found no trace of the deer, Porterfield called Jeff Annis with Low to Ground Deer Recovery. Annis brought his dog Cooper, who sniffed the area, quickly getting on the trail. In no time, Cooper found the 12-point buck.

“He went straight to the deer in a big cutover that was so thick, you could hardly get to it. It took us 20 minutes to get to the dog,” he said. “If anyone ever needs a good tracking dog, he is the man to call.”

Congratulations to Porterfield, who is now entered in our Bag-A-Buck Contest and in the running for these monthly prizes and the Grand Prize package:

Brian Carroll Bag a Buck, Deer of the Year, Newsletters

Rosalyn Ballam, of Awendaw, S.C. chalked up her second deer of the 2022 hunting season with a Williamsburg County hit-list trophy. […]

RDabbs166 Bag a Buck, Deer of the Year