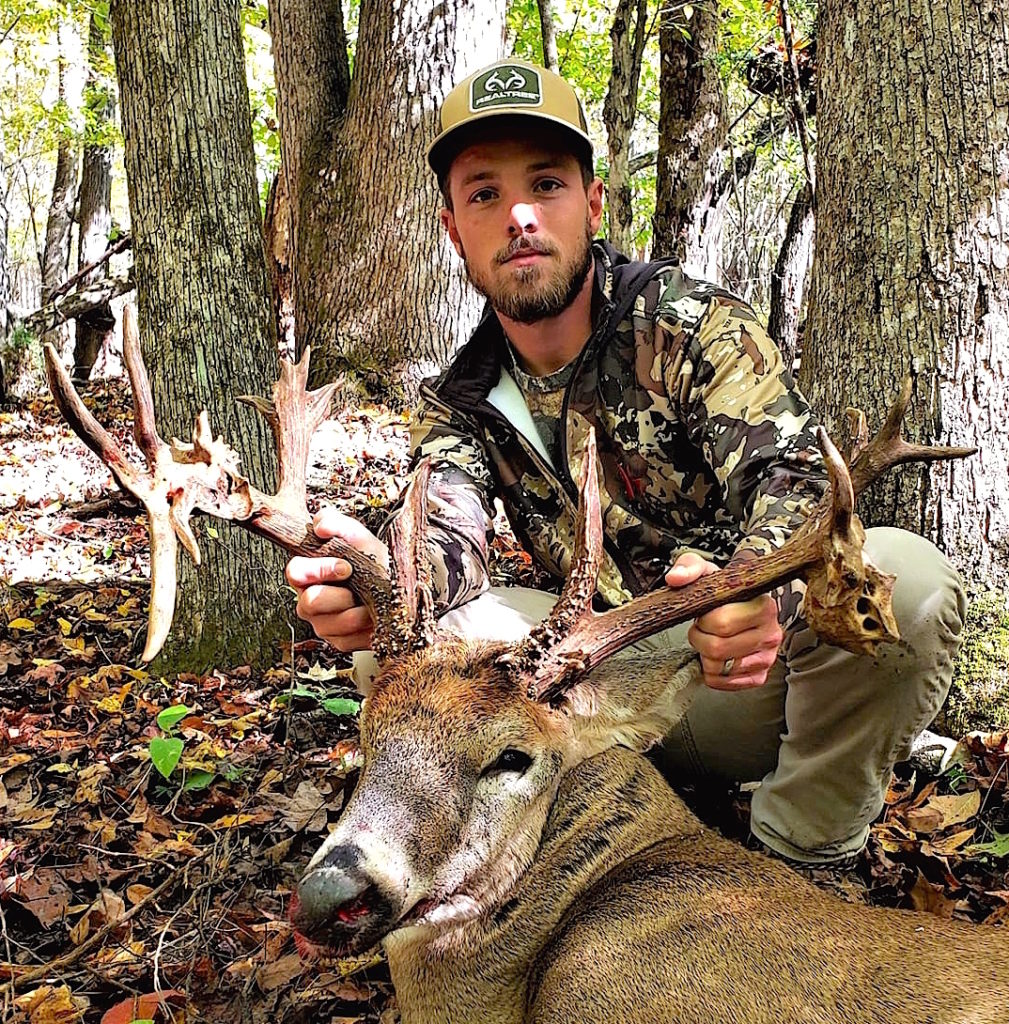 Hurricane, heart attack were no matches for Fate

Lathan Peterson of Taylorsville, N.C. killed a 19-point non-typical buck on Oct. 26 in Caswell County. The buck has been green-scored at 161 5/8 inches.

Peterson lives in Alexander County, but prefers to deer hunt with his dad in Caswell County, 145 miles to the northeast. One of their Stealth trail cameras photographed an image of a wide-racked, crazy-tined monster buck during July.

Their Stealth cameras send photos to their cell phones, allowing them to keep tabs on the herd without disturbing the area to pull camera cards.

“We have Stealth trail cameras, and they’ve been game-changers,” Peterson said. “As the rut approaches, we’ve been able to watch behavior and movement changes.”

Work interrupted their hunting plans. They are both insurance estimators, and when Hurricane Ida hit New Orleans in early September, they headed to Louisiana.

They returned to North Carolina 27 days later, two weeks after the green flag had dropped on archery season. Peterson kept his fingers crossed that another hunter hadn’t killed the trophy 19-point buck.

“I wanted to hunt him opening day of bow season (Sept. 11) or at least before muzzleloader season began,” he said. “I was afraid he’d get run off or shot. After I killed him, three hunters told me they’d also been hunting him. One of them sent (the deer’s image) taken by his trail camera 14 miles away.”

19-point buck shows up at the right time

As luck would have it, the giant buck avoided detection, so Oct. 26, Peterson was waiting for him at a tree stand.

But he didn’t want to be there that day. His dad had a heart attack on Oct. 24 and was in the hospital.

“I wasn’t gonna go Tuesday. But he kept pushing me to pursue the buck,” he said.

Their most-recent trail cam images showed the deer only at night. But Oct. 25 it had walked in front of the camera three times during daylight.

“Does always showed up 20 minutes before he’d arrive,” Peterson said.

The next morning, the hunter climbed into his Loc-On stand an hour before daylight. Five does slipped to the bait pile at 7:30 a.m., followed by a single bleating doe.

“I figured he’d be next,” Peterson said.

Soon, he saw the buck walking toward the bait pile from 100 yards away.

“I had time to get ready for the shot with my crossbow,” Peterson said, referring to his Wicked Ridge NXT 400 with a bolt tipped by a Rage two-blade retractable broadhead.

The buck was quartering to Peterson at 41 yards when he pulled the trigger. At first, he was unsure of his shot placement.

“I thought it was a bad shot. But (the bolt) hit behind the shoulder, and the Rage did a number on him. Where it came out was a hole big as a baseball.”

The hunter believes fate had a hand in taking the trophy buck.

“The Lord directed that deer in front of me,” Peterson said. “Strategy can take you only so far.”

It’s an understandable feeling since a hurricane and his dad’s heart attack couldn’t prevent Peterson from downing his all-time buck.

Congratulations to Peterson, who is now entered in our Bag-A-Buck contest. Click here to enter your buck in the Carolina Sportsman Bag-A-Buck contest. We’re giving away some great monthly prizes, as well as a Grand Prize that includes a Millennium M25 hang-on deer stand and a 2-man, 2-day hunt for deer and hogs at Cherokee Run Hunting Lodge in Chesterfield, S.C.

My biggest buck to date!

This 14-point buck showed up on the opening day of rifle season for one lucky hunter. […]