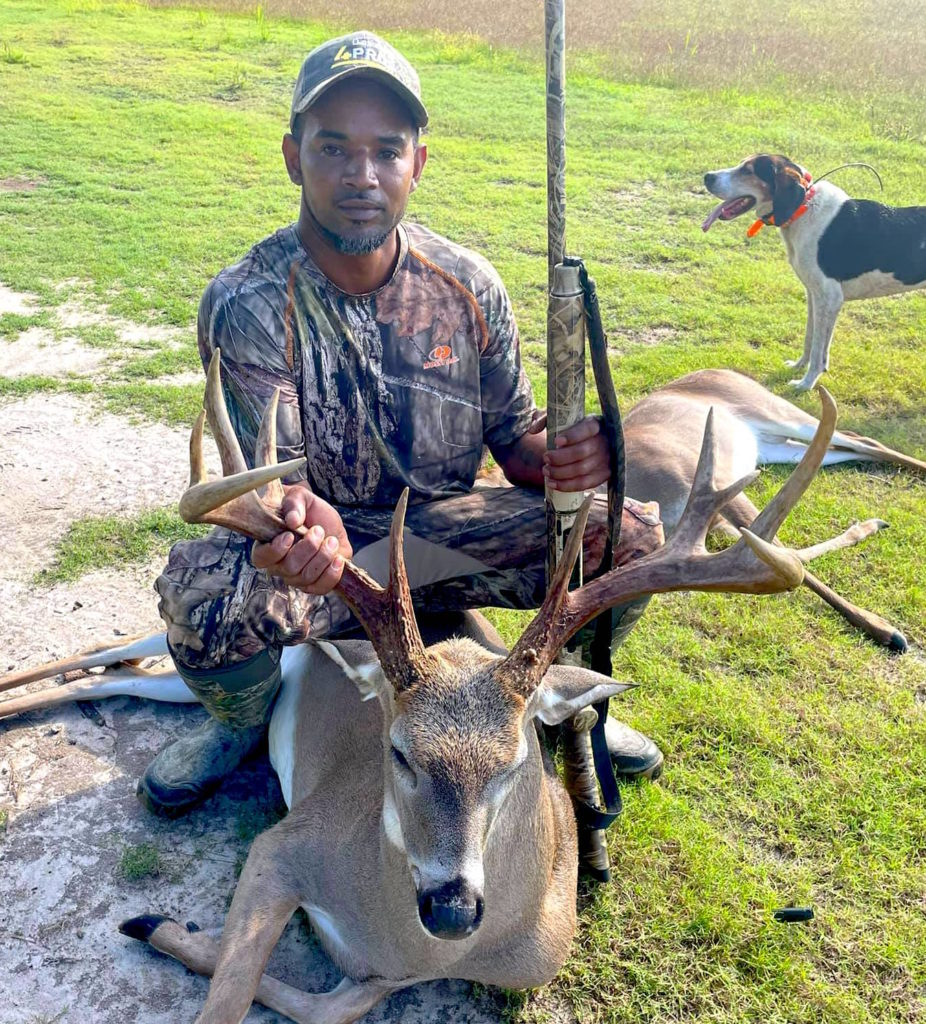 Jarvis Cornelius of Columbia, S.C. killed a 10-point beast of a buck on Sept. 18, 2021 while participating in a dog hunt in Orangeburg County. The buck weighed more than 200 pounds, had a 22-inch spread, and has been green scored at 144+ inches.

To top it off, he also killed an 8-pointer that was running with the 10. And they were hunting with only one dog.

He shot the two deer with a Stoeger 12-gauge autoloader with 3-inch loads. He said he was happily surprised at his luck on the hunt.

“It surprised me for sure. I’ve been hunting hard for about 6 years. And that’s the first time something like that has ever happened to me,” he said.

Cornelius was hunting near Bowman on his uncle’s hunt club. Once he was in his spot, he waited about 30 minutes before a single dog ran the two bucks straight to him.

“We got started that morning, and we were only hunting with one dog. So everybody got in their spots and settled in. And after about 30 minutes, I heard the dog running something my way. I figured it was probably some does,” he said.

But he realized quickly that it was two bucks. He said he didn’t have time to really grasp the size of their antlers, but he knew they were good bucks. He shouldered his shotgun, took aim, and pulled the trigger.

“The big buck fell first. And then the other one, the 8-point, ran behind me. So I turned around and threw two shots at him. Then he fell. And I was happy,” he said. “Like I say, I’ve been hunting about 6 years and for something like that to happen is rare for me.”

Neither deer made it out of the hunter’s sight before falling for good. It was then that Cornelius realized just how massive the antlers were on the big buck.

He gave credit to his uncle and the dog. He said the two work together like a well-oiled machine.

“My uncle is basically a GPS on deer. He’s been doing it for so long. He knows where to put the dog. And then the dog just gets in there and jumps whatever he can find. I’m still kind of blown away at it happening. I just enjoy the hunting so much, and just happy to have something like this happen,” he said.

Congratulations to Cornelius, who is now entered in our Bag-A-Buck contest. Click here to enter your buck in the Carolina Sportsman Bag-A-Buck contest. We’re giving away some great monthly prizes, as well as a Grand Prize that includes a Millennium M25 hang-on deer stand and a 2-man, 2-day hunt for deer and hogs at Cherokee Run Hunting Lodge in Chesterfield, S.C.

James Seigler of Aiken, S.C. killed his biggest deer, an 8-point buck that weighed 181 pounds. The buck was in full velvet. […]