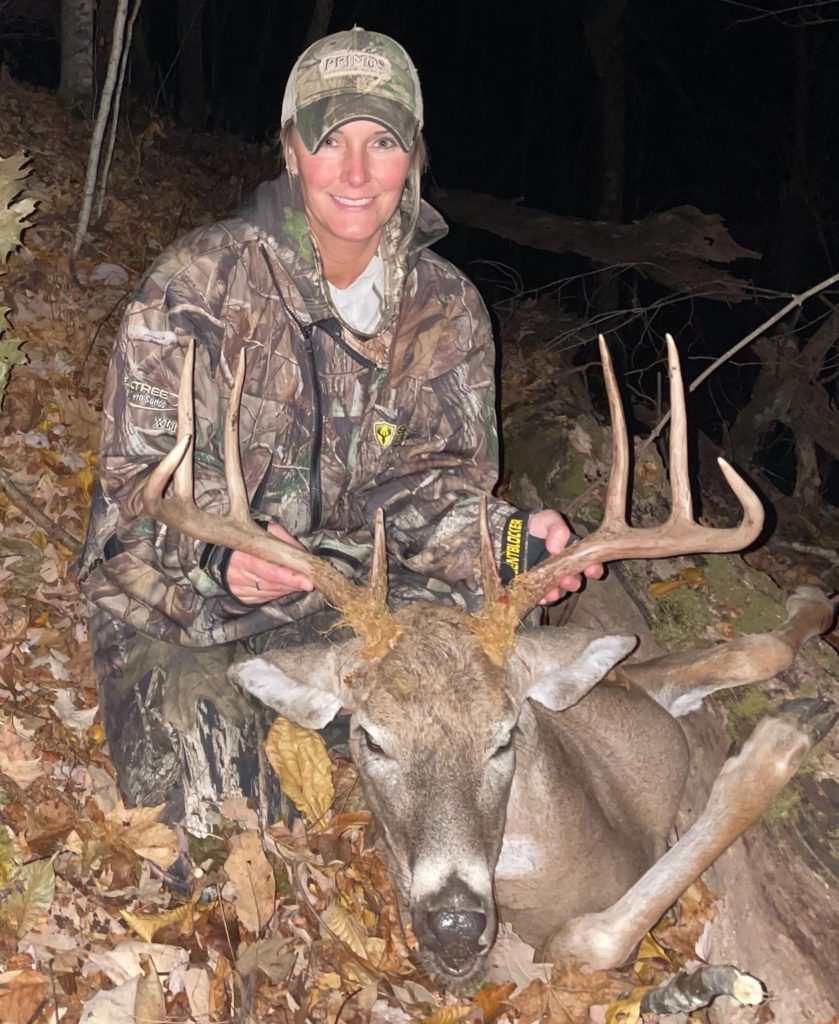 Stella McKinney of Newland, NC was hunting in Avery County on Oct. 29, 2022 when she drilled an 8-point buck that’s been green-scored at 124 4/8 inches. It weighed a whopping 203 pounds — and that was after being field dressed.

McKinney shot the buck with her Excalibur crossbow armed with an arrow tipped with a NAP broadhead at approximately 6:40 p.m. She was perched in a tree stand overlooking a wooded area when the 8-point buck showed up and offered her a shot at 40 yards.

She had 2 years worth of trail cam photos of the deer, which had a 20-inch spread. And she’d also had in-person encounters with the deer before. But this was the first time she’d ever had a clear shot at it.

“I had seen him a couple of times last year, but could not get shots on him,” she said. “I have history with this deer. And I named him the Wide 8. I have hunted him for 2 years.”

McKinney put her time in, targeting this deer specifically almost every evening since the opener of archery season. And she was rewarded with a great buck, and a first for her with a crossbow.

“I have hunted almost every evening since bow season opened this year, and I hadn’t seen him in person this season until he showed up on Oct. 29. This was my first kill with a crossbow,” she said.

Congratulations to McKinney, who is now entered in our Bag-A-Buck Contest and in the running for these monthly prizes and the Grand Prize package:

Go down under for trout

Going deep for mountain trout involves certain techniques and tools that will have you catching more and bigger fish. […]

Blue lining is the art of fishing tiny streams for mountain trout, and a great way to enjoy some solitude on the water. […]

My son, Lincoln Cashion (7), shot his first deer during Western Muzzleloader season in Macon County, NC. It was the first deer taken from the new property my friend recently purchased. The shooting rail was […]