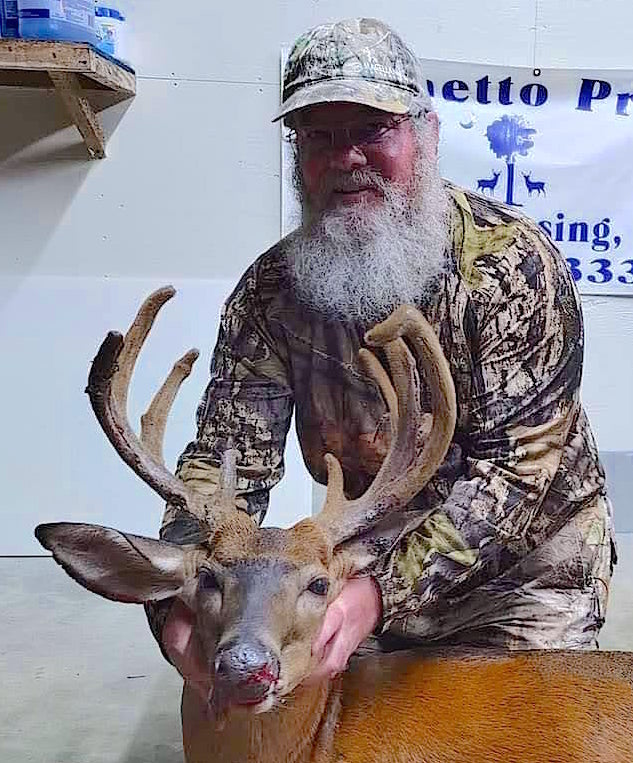 Michael Wolf of Martin, S.C. killed a big non-typical 13-point buck in full velvet during an evening hunt in Allendale County on Aug. 25, 2021. The buck’s antlers had a 90-degree bend on one tine.

It’s the first non-typical, and the first buck in velvet that Wolf has ever killed. It appeared to have had more than 13 points at one time, but some tines were broken off. It’s a deer he had never seen in the flesh before. His trail cams had taken video of the buck during darkness on Aug. 20.

“This was our first, and last meeting in the flesh. I had video of him on my trail cameras on Aug. 20 at 1:44 a.m. He hung out eating corn for quite a while,” said Wolf.

He shot the buck with an AR10 that he took a lot of effort to build. It’s made with a Palmetto State Armory Gen. 3 lower, a Delta Team Tactical upper, an Aero Precision M5 receiver, and a 20-inch stainless steel barrel.

“I have my trusty ATN X-Sight II HD day/night rifle scope in 5×20 mounted on it for recording the action,” he said.

Wolf shot the buck at 100 yards while the deer stood in a hedgerow under a few large oak trees on the other side of his 5-acre front yard. He was hunting from a Quadpod stand with a top on it. He said he didn’t make a perfect shot, but it was close enough that he didn’t have to track the deer.

“I hit him a little lower in the neck than I usually do. So he leapt forward like a rearing horse, then came down sideways and died on the spot. No tracking necessary,” he said. “It was the first non-typical and first velvet buck I have ever harvested. So that ticked off two desires with one shot.”

Wolf was glad to harvest such a unique buck. And seeing his wife’s reaction was also a great moment for him.

“The other best part was my wife’s reaction upon seeing the buck as she arrived with the tractor to load him up,” he said.

Wolf is now entered in our Bag-A-Buck contest. Click here to enter your buck in the Carolina Sportsman Bag-A-Buck contest. We’re giving away some great monthly prizes, as well as a Grand Prize that includes a Millennium M25 hang-on deer stand and a 2-man, 2-day hunt for deer and hogs at Cherokee Run Hunting Lodge in Chesterfield, S.C.

Seventy-three-year-old Albert Threadgill killed a monster 9-point buck that should stand in N.C.’s top 5 crossbow kills of all time. […]

Jamie Moore of Stokesdale, NC was hunting in Person County when he killed a trophy 12-point buck that’s been green-scored at 140 3/8 inches. […]