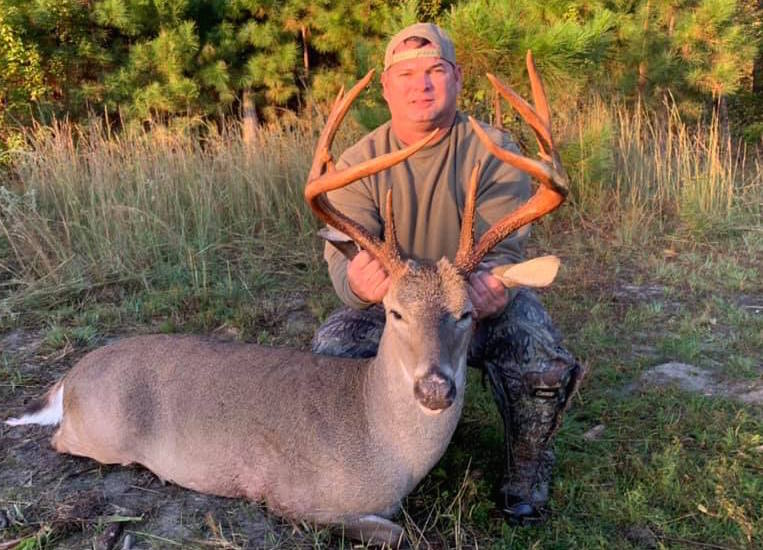 Trophy 10-point buck has been green-scored at 156 inches

Michael Hutto of Barnwell, S.C. killed a 230-pound, 10-point buck that’s been gross green-scored at 156 inches. The buck was a consistent visitor to the Barnwell County property Hutto hunts with his friend Jeremy Roland since 2018.

Hutto and Roland nicknamed the buck High Hat in 2018, due to the tall tines of the buck’s antlers. Unfortunately, the buck was showing up on their trail cameras at night ever since it first showed up.

In November 2020, Roland saw the buck in the flesh during an evening hunt. But he did not get a shot at the deer.

“He came to the corn pile right at dark. He fed facing away from me and he never would provide an ethical shot,” said Roland, who opted not to shoot for fear of wounding the buck.

That was Roland’s last sighting of the deer for the 2020 season. He fretted through the next 7 months wondering if High Hat was still around. He breathed a sigh of relief one week before the 2021 season began.

“One week after we put the trail cameras out, High Hat showed up. We were still getting early morning and late night pictures of him all the way up until about the first week of October. Hutto sent me a picture of him at 7:30 a.m. in the corn,” he said.

On Oct. 17, Roland had another encounter with the deer, but not one that resulted in taking a shot.

“I took my son Caiden, who is 12, to get a quick hunt in before church. The temperature had dropped in the 40s and we knew this would be a good opportunity to get him. I climbed into the stand and noticed that there was a large-bodied deer on the corn,” he said.

The deer left while Roland was getting his son situated in the stand. They checked the trail camera, which verified the deer was High Hat.

“The next morning, Oct. 18, Hutto went to the same stand, which sits in the middle of 6-year-old planted longleaf pines with a small food plot and corn in the middle. At 7:05 a.m., Michael shot High Hat with his 7mm Remington Mag at a little over 130 yards. The deer ran about 30 yards and dropped,” said Roland. 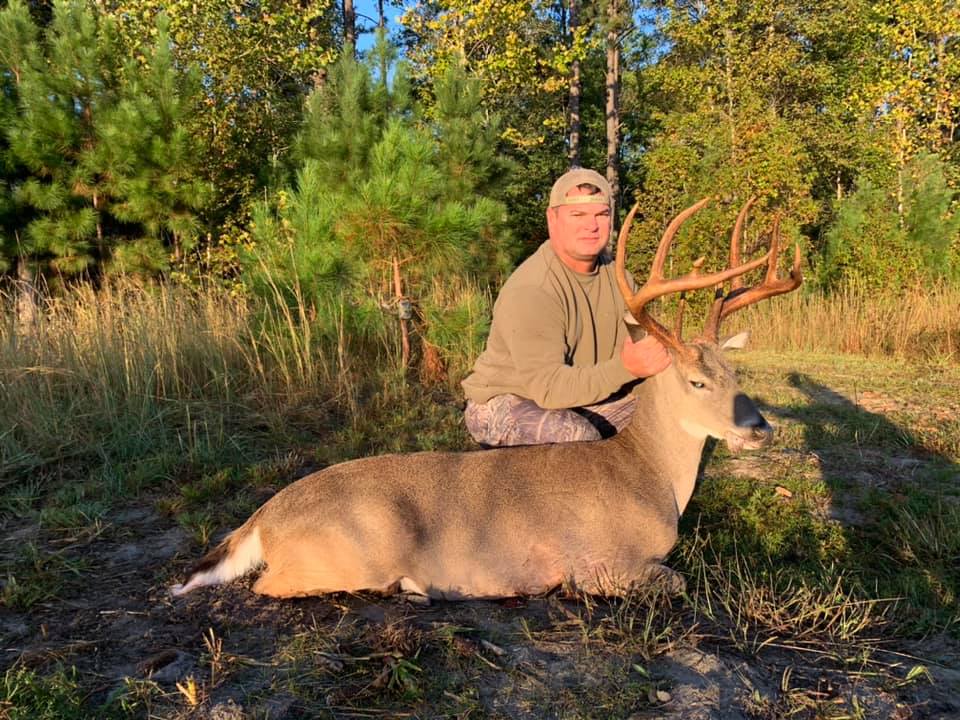 Hutto’s taxidermist green-scored the 10-point buck at 156 inches. He guessed the age at more than 6 1/2 years, and sent the jawbone in for a more accurate aging. Roland was happy for his friend, but said it’s a little bittersweet for both hunters.

“I was extremely happy that he got him. But I felt like we had grown a relationship with that deer for the past 4 years. Knowing that he’s gone, checking trail cameras won’t be the same. This wasn’t just a hunt; it was a legacy and great memories to tell for the rest of our lives. Congrats to Michael, who gets to have that reminder on his wall every day!” he said.

Congratulations to Hutto, who is now entered in our Bag-A-Buck contest. Click here to enter your buck in the Carolina Sportsman Bag-A-Buck contest. We’re giving away some great monthly prizes, as well as a Grand Prize that includes a Millennium M25 hang-on deer stand and a 2-man, 2-day hunt for deer and hogs at Cherokee Run Hunting Lodge in Chesterfield, S.C.

This 9-pointer was a regular on trail cameras, but only in the dark. As the rut came in, the deer began showing up during daylight. […]

Our grandson Deacon Kirby is 5-years-old from Lenoir NC. This is his first deer. We are so proud of him. –Christie Holloway