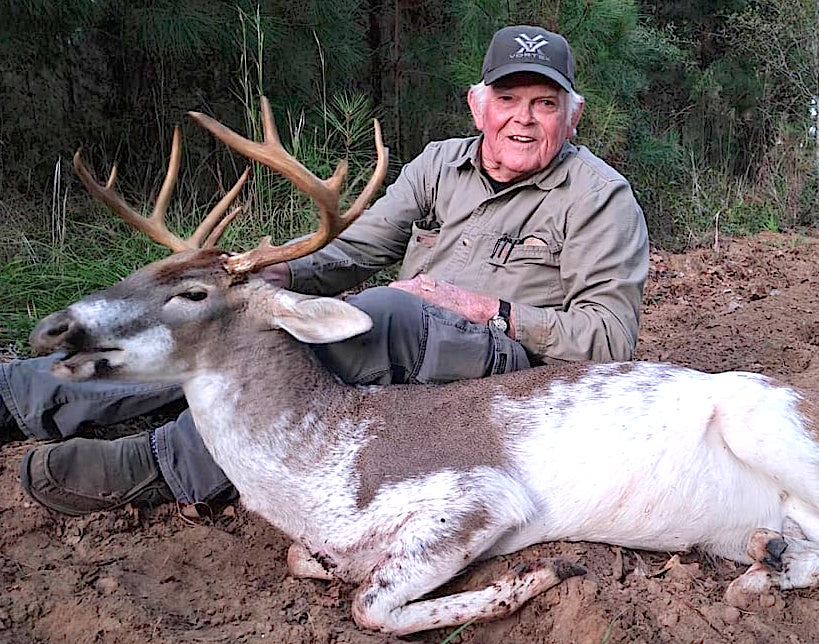 It’s also one of hundreds of deer he’s killed in his 77 years. Brabham is a lifetime hunter, and recorded just shy of 400 bow kills before a shoulder injury pushed him out of archery hunting.

His son, Fletcher Brabham, said this buck was just as special as the rest, if not more so.

“I’m super excited for ole “Pop Pop.” This man has always been an ambassador for white tail deer hunting. From every aspect. Land management, food management, heard management, etc. This is a man that fell just short of 400 bow kills due to a few shoulder issues (and a couple birthdays).  But those issues have not slowed him down as the outdoorsman that he is. I have tracked many a deer with and for my daddy . This, even though it was not hard to find will always remain with me. I’m super proud of the man that made me,” said Fletcher.

“It’s absolutely amazing! Two years, two calico bucks for my Pop Pop (Spann Brabham). Saying I’m proud would be such an understatement! Anybody that knows my granddad truly knows his passion for whitetail deer and wildlife in general. I can say without a doubt nobody deserves this more than him. At 77-years-old, hunting can be a struggle sometimes, but not for this killer!” said Azzarelli.

Congratulations to Brabham, who is now entered in our Bag-A-Buck contest. Click here to enter your buck in the Carolina Sportsman Bag-A-Buck contest. We’re giving away some great monthly prizes, as well as a Grand Prize that includes a Millennium M25 hang-on deer stand and a 2-man, 2-day hunt for deer and hogs at Cherokee Run Hunting Lodge in Chesterfield, S.C.