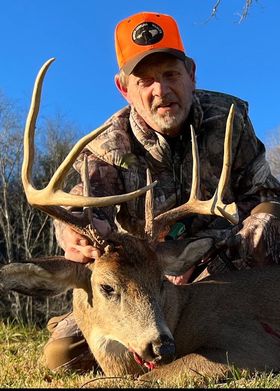 Trophy buck had broken tines on both sides

“I had never seen this buck while hunting but had hundreds of trail camera pictures,” said Parsons, who shot the buck from 70 yards away from an elevated box stand.

The hundreds of photos were from 2 years worth of random visits by the trophy buck. Parsons said he would have hunted him harder during the 2020 season, but photos showed the buck had broken off all the points on one side of his rack.

“He had broken all points on the right side. He was a fighter,” he said.

Even this year, the buck had two broken points.

“He was an 11-pointer with a sticker on the right base. He had a broken G2 on the right side and G4 on the left side,” Parsons said.

This season, the buck continued its tradition of randomly showing up until the week of Dec. 6, when trail-cam sightings became much more regular. On Sunday the 12th, Parsons was just happy to be in the stand after being sick. Things got even better for him when the deer stepped into the hardwoods.

“I was just recovering from COVID. I hunted Saturday morning, and then took him at 3:20 Sunday afternoon,” he said.

Click here to see our Bag A Buck gallery from 2021.

Testing will be mandatory for harvested deer in parts of eight NC counties for 2022 season. […]

About Brian Cope 2176 Articles
Brian Cope is the editor of Carolina Sportsman. He has won numerous awards for his writing, photography, and videography. He is a retired Air Force combat communications technician, and has a B.A. in English Literature from the University of South Carolina. You can reach him at brianc@sportsmannetwork.com.
Website

Shoot any round through any firearm with subcaliber adapters