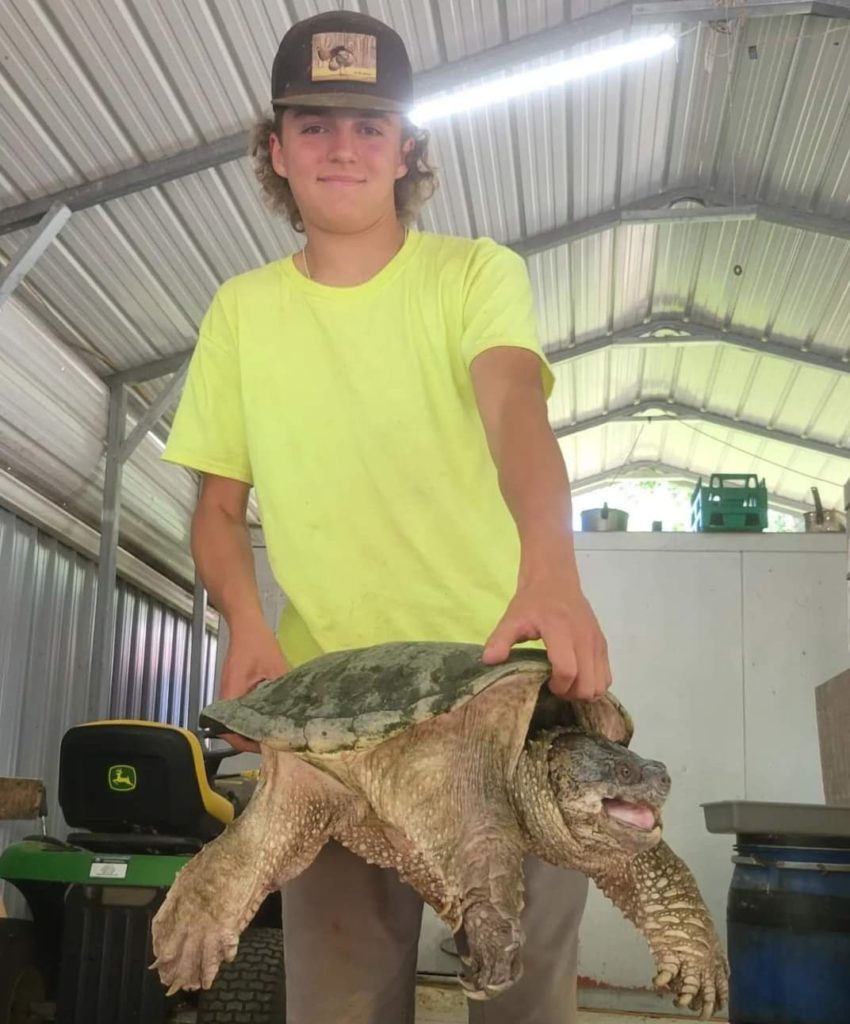 90 snapping turtles were weighed during the competition

Noah Thas finished second with a 36-pound snapping turtle, followed by Bryson Neal in third place with a 30 pounder.

Jamie Harkey, owner/operator of Harkey’s Taxidermy in Vale, N.C. said they decided to hold the contest to reintroduce the sport of turtle hunting to the area.

“Turtle hunting is a dying sport. Our goal was to get people excited about turtle hunting, learn the sport and enjoy something that most people have forgotten about,” she said.

And Harkey said the turtles that were killed will not go to waste. The meat from them is too delicious, she said.

“Turtle meat is excellent if prepared right. We plan to cook a big washpot of turtle stew and invite the community free of charge to partake,” said Harkey.

A total of 90 turtles were weighed in during the contest. Team Kasey/Hunter caught the most, with 21.

Aside from the biggest turtle prize, a drawing was also held at the end of the contest. Nolan Locklear won a Stevens .410 shotgun and Dustin Johnson won a knife and turtle-skin sheath.

Harkey was happy with the participation level of the contest, and said they hope to run it again next year. It’s a sport, she said, that anyone can get involved in and have success in.

“Turtle hunting is definitely a sport that does not get a lot of recognition. It is a sport that doesn’t require a fancy Sitka suit or expensive equipment. Anyone can do it and a few people are really skilled in it,” she said.

Seeing all the turtles and the excitement of participants was just one part of holding the contest.

“A lot of people got out and enjoyed it. And because of this contest, we were able to meet new people and hear lots of old stories about turtle hunting and the old ways,” Harkey said.

Next up for Harkey’s Taxidermy is the Fall Predator Contest. It will be held Oct. 17 through Feb. 28. Click here for more information.

lagood11 Bag a Buck, Deer of the Year, Newsletters

Taylor Phillips killed a NC cryptorchid buck that was special to him for many reasons. […]

The crappie bite heats up as High Rock Lake’s water cools down in December. […]