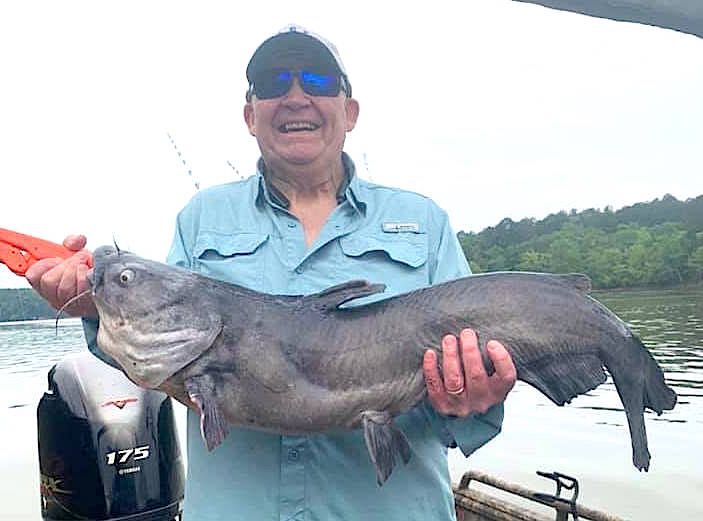 Moving water is the key to May’s Wateree catfish bite

Anglers fishing on the northern end of Lake Wateree are catching big numbers of catfish, especially good eating-sized fish. The key to getting on the hot bite is to fish moving water with cut bait while anchored down, according to Capt. Jason Wolfe.

Wolfe, of Wolfe’s Guide Service, said the 30- to 40-pound class and up fish are tough to catch right now. They are spawning and not interested in feeding very much. But the bite is plenty hot for quality catfish that are good for the table.

And whether the water is moving or not depends on whether the Wateree Dam on the lower end of the lake is releasing water or not.

“On a recent trip, we had lines out when the water was standing still and we weren’t getting a bite. Once they started drawing water, you could see the current pick up. And we started catching fish and kept catching them until the trip was over. There’s something about that moving water that triggers them to bite,” he said.

Get ready for the big cats to bite soon

Wolfe has been anchoring down and using Carolina rigs with cut shad and white perch. He said he hasn’t noticed the fish preferring any particular type of cut bait over another. And he’s been adding corks to some of his rigs in between the hook and the swivel. Sometimes that makes a big difference in keeping baits out of the muck. But he said right now, the catfish are biting the rigs with and without corks equally well.

“Sometimes it just doesn’t matter, depending on whether the bottom where you’re fishing is especially muddy or not. When it’s a mess down there, the float will help keep your bait out of it and it helps the catfish find it. But right now in that upper part of the lake, the bottom isn’t very mucky at all,” he said.

Wolfe expects the same pattern to continue for the next couple of weeks. After that, the bigger catfish will be done spawning. They’ll move back down to the lower section of the lake then, and the big fish bite will pick up considerably.

A boating and fishing expo will take place before the USC/Kentucky football game on Saturday, Sept. 25, 2021 in Columbia, S.C. […]

James Brooks from Siler City, NC caught this 23-inch flounder with a live finger mullet while fishing near Carolina Beach on Aug. 20, 2021. […]

About Brian Cope 1997 Articles
Brian Cope is the editor of CarolinaSportsman.com. He has won numerous awards for his writing, photography, and videography. He is a retired Air Force combat communications technician, and has a B.A. in English Literature from the University of South Carolina. You can reach him at brianc@sportsmannetwork.com.
Website

Paddle up some September shooting in the Carolinas