Fishermen have high expectations when fishing the Santee Cooper lakes this month. And that’s as it should be.

Lake Marion and Lake Moultrie produce angling action that ranks among the Carolinas’ best for multiple species, and December fishing patterns are strong.

A unique combination of panfish species, each on strong bites, can be caught with similar techniques this month. With minor tackle adjustments, anglers can target slab crappie and huge bream, creating the Santee “Double-Dip.”

Excellent crappie fishing is no surprise. Slabs traditionally produce outstanding action throughout the fall and early winter. But the concurrent bream bonanza surprises even experienced anglers.

Kevin Davis is a guide and owner of Blacks Camp on the Diversion Canal between the lakes. He won’t say the bream fishing from mid-November through the end of the year is as good as the bedding fishing during the spring. But the results are close.

“This late-season bream fishing is simply spectacular on both lakes,” Davis said. “Fishermen aren’t used to the concept of deep-water bream fishing. But it’s the key right now.”

The water temperature, Davis said, cools to the point where big, bull bream — the same size-class of fish traditionally caught off the beds during the spring — pile into open-water cover that anglers can easily target.

The good news is that public fish attractors are one of his prime spots for this action.

“The bream fishing is an extremely consistent pattern. And I’ve morphed my fall crappie-fishing tactics to target bream, too,” he said. “The species have separate creel limits — 20 for crappie and 30 for bream — so it’s not a simple trade-off on fish caught. However, the state law has a combined 40-fish creel limit per person on these species. Anglers must stay within the creel limit for each species. But it’s realistic to expect big catches of both species on any given day.”

The key in either lake is underwater cover in water from 12 to 30 feet deep. Brush is the top target, but Davis said he routinely fishes the public fish attractors scattered throughout both lakes as well as his own sites. 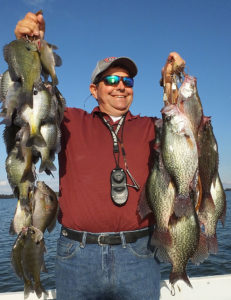 “I’ve found the key to the species present on a given fish attractor is often depth-related, with shallower water often preferred by bream,” he said. “I’ve also found that a public fish attractor with hard material such as concrete debris, in addition to woody cover, is especially attractive for the big bream.”

“When fishing for crappie on deeper brush, we’ll occasionally find bream,” he said. “It’s more likely to find bream on deeper brush than it is to find crappie on shallower brush during December. At times, we’ll catch several crappies, and then load up the bream rods with crickets and haul several big bream off the same brush.”

Stevie English of Cross, S.C., is another guide who targets multiple species and who enjoys the December Double-Dip. He works the same type of cover as Davis and varies his crappie rig by using live minnows fished on a tight-line as well as jigs. And he also uses small jigs with a minnow trailer.

English identifies the brush on his depth finder, then uses his electric motor to position the boat directly over the target. He pulls line off the reel in 2-foot increments to keep the bait or lure just above the top of the brush.

“On most days, the crappie will be holding at the top of the brush. But occasionally, the fish are a bit deeper along the sides,” English said. “It’s important to check the entire brush thoroughly, because fish often congregate in small sections of (it). After thoroughly fishing a spot without action, I’ll make a move. At this time of the year, crappies and bream are fairly aggressive. So I don’t linger long without action.”

English said rods ranging from 6 to 10 feet with light tips are ideal for both species. The biggest difference between crappie and bream rigs is he’ll use a No. 6, long-shank, wire hook baited with a cricket for bream. He has separate sets of rods rigged for each species, allowing an instant change when appropriate.

Bream fishing is not Plan B

“Generally, we’ll hold the rods and feel for the bite rather than fishing multiple rods from rod holders,” he said. “One rod is plenty when the bite is on. And we can tell if we’re getting short strikes on the crappie rig. If so, we’ll drop a cricket on a bream hook and often, a big bream loads on immediately.”

Davis said bream fishing in December is not a “Plan B” in case crappie don’t bite. Targeting bream is a legitimate trip in its own right. And odds are, anglers can catch good limits of big bream in short order.

“I’ve found that even when guiding specifically for crappie, I’ll carry a couple boxes of crickets. Once we’re happy with the crappie catch, I’ll target a bream spot. When big bream start putting horseshoe bends in the rods, some seriously fun bream fishing is on.

“We don’t always catch bream mingled with crappie. So when I look for bream, I work attractors with shallower cover than the ideal crappie depths,” he said. “Sometimes, the best bream cover will be in water 15 to 20 feet deep, with the top of the brush or debris no more than 10 feet deep. Bream are usually very aggressive, and they’ll often take the cricket as it drops. Multiple bream hookups are common. It’s crazy good bream fishing for December.”

Davis said that most anglers prefer to get out early. And good action can occur during low-light conditions, but often, the prime time begins about 9 a.m.

“During December, especially on bright days, the crappie and bream are going to be pulled to the cover as the sun gets higher, making them even easier to target and catch,” he said.

HOW TO GET THERE — Lake Marion and Lake Moultrie are just north of I-26 between Charleston and Columbia, with I-95 crossing Lake Marion, providing access to fishing camps on both sides of the lakes. The Diversion Canal connects the two lakes and is a prime area for fishing either lake, with numerous fishing camps available for lodging, boat access and tackle supplies. For complete details, visit www.santeecoopercountry.org.

WHEN TO GO — Big crappie and bream will show up on the same deep brush through December.

BEST TECHNIQUES — Locate deep brush piles, including fish attractors constructed and sunk by the S.C. Department of Natural Resources (www.dnr.sc.gov/fish/fishattract/moultrieloc.html and http://www.dnr.sc.gov/fish/fishattract/marionloc.html). Drop down live crappie minnows and live crickets around the brush, probing areas in 15 to 30 feet of water. Light-action rods are preferred. 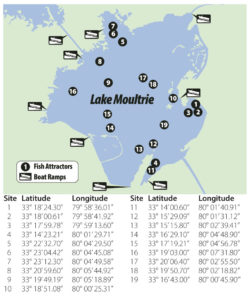 “In December 2018, I was on an excellent pattern for crappie and bream on the attractors,” he said. “Most days, I never saw another boat working those sites.”

Levi Kaczka, fisheries biologist for the S.C. Department of Natural Resources said 32 public fish attractors are maintained: 19 on Lake Moultrie and 13 on Lake Marion. “All 32 attractors have some amount of structure,” he said. “We regularly replenish the attractor sites with various materials.”

Kaczka said as recently as October 2019, SCDNR had technicians working on replenishing attractors with bamboo and brush.

“This project is worked regularly, and our technicians maintain an excel spreadsheet to track work on all attractors,” he said. “This helps ensure we consistently replenish all sites.” 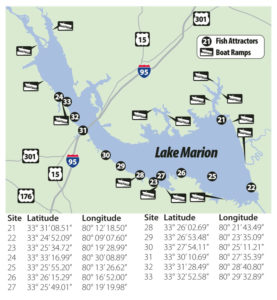 He said 18 attractors — nine in each lake — had large materials sunk on them as a cooperative project between SCDNR, Santee Cooper Country and the Santee Cooper utility. Materials included large, concrete structures such as culverts and pipes discarded when the lock gates were replaced at Pinopolis Dam.

Although no biological studies have been accomplished to track fishing success around the attractors, Kaczka said SCDNR workers regularly see boats anchored over them. Discussions with anglers at landings report successful trips to the sites.

“Occasionally, we’ll electrofish over attractors to get a snapshot of the fish they’re holding, and we use side/down imaging sonar to view the materials and fish,” he said. “What we see is encouraging, both in numbers and size variation of fish on these attractors.”

Know your target on Santee Cooper lakes in July

Santee Cooper fishing is not bad in July — if you know your quarry and understand their summertime patterns. […]

Kerr Lake crappie are on deep brush in August. […]

About Terry Madewell 715 Articles
Award-winning writer and photographer Terry Madewell of Ridgeway, S.C., has been an outdoors writer for more than 30 years. He has a degree in wildlife and fisheries management and has a long career as a professional wildlife biologist/natural resources manager.