Grouper taste great, and have a limited season

Because they are such a wonderful-tasting fish, grouper are highly sought-after, so coveted that fisheries managers restrict their catches.

Anthony Ng, 56, a Winterville, N.C. native, has fished for groupers with his brother, Alex, for more than 30 years.

“At first, we grouper fished just for fun,” said Ng. “We’ve always liked taking friends grouper fishing, although I guided for a while. Alex and I have offshore fished since the early ’80s.

“We had a passion for bottom-fishing because it’s steady action, doesn’t require trolling, and is anticipation friendly.”

When Ng leaves Beaufort Inlet in his 30-foot center-console boat, he heads for the closest of his GPS fishing waypoints, in about 80 to 90 feet of water.

“First stop are ledges 20 miles out” Ng said. “We catch snowy groupers at 700 feet. Where we fish depends on what we’re after, but many are at the same places. If the first stop doesn’t work out, we move a little deeper.”

Drift when it’s too deep to anchor

When the Ngs fish relatively shallow hot spots, they anchor, then bait and drop circle hooks. Obviously, in 700-feet depths, anchors won’t work, so they drift across prime spots.

For fish that may weigh 20 to 70 pounds, Ng prefers 6-foot rods with strong backbones and fast actions.

Ng calls his favorite double-dropper set-up a “hi-lo” rig, with a 2-foot “hi” dropper line and 10/0 to 11/0 circle hook tied to a three-way swivel’s middle eye. Four feet of 100- to 125-pound mono leader is tied from the bottom eye to a second three-way swivel, then a 3-foot dropper line and circle hook to the side. Six inches of 50-pound leader is tied to the bottom swivel eye then to a sinker: a 4-ounce bank sinker in shallow water, a 20-ounce sinker in medium depths and 4 to 5 pounds at extreme depths.

“If the weight gets hung, you can break it off without losing the entire rig,” Ng said.

Baits may include live or dead menhaden with hooks impaled in bone, Boston mackerel, sardines, pinfish, croakers and spots.

“You’ve got to know when to start cranking,” Ng said. “But you can’t yank back on a circle hook; just keep steady pressure.”

If a big grouper is hooked but swims into a hole, Ng often puts the reel into free spool; the fish may swim out. If it doesn’t, plucking the line like a guitar string may make it seek open water.

Depth isn’t the only key to success.

“I look at my depth finder to see the bottom and spot baitfish or target fish,” he said. “We also fish ledges and wrecks.”

Most people consider a ledge to be a rock outcropping or a cliff wall, but to saltwater anglers, ledges are small changes in the bottom contour, often only a foot or two.

This is no time for light tackle

Strong tackle is important. Grouper fishing along the continental shelf isn’t for those without strong backs, legs and arms who use stand-up equipment. But cranking 50, 60 or 70 pounds of strong, aggravated fish to the surface exhausts most sturdy men after one tussle.

The Ngs turned years ago to electric reels, which can be plugged in to electrical outlets below the gunwales on specially equipped boats.

“The first thing a grouper will do is dive to get underneath something or into a hole — a rock, an outcrop or in a wreck,” Ng said. “You’ve got to turn his head up, away from that stuff.”

The “pump-and-crank” method, slowly pulling the rod tip up then lowering it as the reel turns, is effective.

“The first 5 to 8 feet are most critical, because big fish are full of energy,” he said. “An electric reel doesn’t stop (putting pressure on a fish). You can’t allow him to turn, or he’ll cut you off.”

Popular deep structure outside Morehead City include 210, 240, East and 1700 Rocks and sunken wrecks such as the Atlas Tanker and Shad Boat.

However, these places are hit hard by anglers. Ng has many small ledges marked in his GPS unit that hold snapper-grouper complex bottomfish.

“When we go from one spot to another, we’re always looking for baitfish,” Ng said. “Deep fish sometimes come to the surface and vice versa. Baitfish draw them up. Places that hold king mackerel and amberjack also hold grouper. Fuzzy marks on my depth finder show schools of baitfish. Solid blips may be groupers; they’re gonna be close to baits.”

Many anglers are familiar with large groupers — red, black, gag, scamp, tiger, yellowfin and yellowmouth. Snowy groupers are a more unusual catch because it takes deeper baits to reach their habitat. The Ngs also catch amberjack and smaller bottomfish such as grunts, beeliners and porgies, especially at ledges and wrecks.

The recreational grouper season in North Carolina begins May 1 and runs through the end of December.

“We sometimes catch wahoo, king mackerel and dolphin, and once a white marlin,” he said. “A 65-pound wahoo once hit a (bottomfish bait) on the drop.”

Catching bottomfish may create a problem for anglers if individual fish don’t measure up to the size minimums or you have a limit of one species.

When fish are hauled up from deep water, their swim bladders expand, often pushing their stomachs out of their mouths and causing their eyes to bulge. They can’t live long in this condition, so a too-small or over-the-limit fish needs to be returned to the water quickly as possible.

The best way to deflate a member of the grouper/snapper complex family is to put the fish on its side — in the shade and on a towel. About halfway to the tail and below its pectoral fin, scrape off a scale, and with a sharp, steel object — a turkey injector works — carefully puncture a hole in the swim bladder. Open the hole and press down on the bladder. Air should escape.

As soon as air stops, put the fish back in the water and move it back and forth to push water through its gills. It should become lively and swim away. 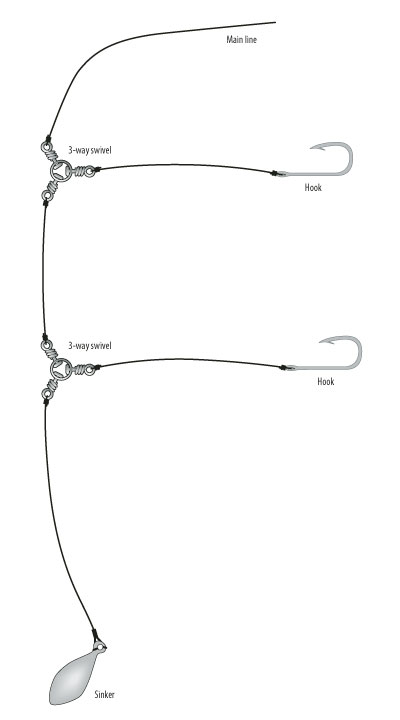 Groupers provide some of the best table fare, and angler Anthony Ng has a favorite recipe.

First, cut grouper fillets and refrigerate them, sealed in a microwaveable bowl. Then, chop up green onions and mix in minced ginger. Cook those two ingredients in peanut oil and add salt for flavor, then pour in a bowl, seal and refrigerate.

Next, pour the chopped green onions and minced ginger sauce over the grouper, cover with wax paper and microwave for five to seven minutes.

“This recipe also works great for triggerfish,” Ng said. “You also can bake it in the oven, grill it or stir fry grouper cut in chunks. Grouper has no fish smell, and there aren’t any blood streaks to remove.”

Target Swansboro reds with topwaters on high end of tide

While fishing on the Roanoke River earlier this year, Clark Purvis of Hobgood, NC caught a tagged striped bass that NCDMF said is 31-years-old. […]

Head out for North Carolina flounder

Leave the marsh behind and jig nearshore reefs for NC flounder. […]