Redbreast sunfish are among the most beautiful of all the bream species, and they’re thick in the blackwater rivers of both Carolinas. Here’s where to go and how to catch them.

Across the Carolinas, redbreast sunfish are among the least common, although in certain bodies of water, they are plentiful. Blackwater rivers and small streams hold good populations.

This time of year, this species’ bright, colorful bodies stand out. They can bend a fly rod or cane pole, Bream Buster or ultralight rod like no other panfish. They can pull drag at an alarming rate from a small spinning reel. And they will eat anything. Minnows, crawdads, crickets, mealworms, maggots, catalpa worms, nightcrawlers, red wigglers, spiders, bugs — if it ends up in the water, a redbreast will eat it.

So an angler targeting redbreasts can have a tackle box just as diverse as a bass fisherman’s, with scaled-down versions of a seemingly unlimited array of lures. But they can keep it as simple as a hook and a cork if they want.

Brandon Freeman of Gators Outdoor Adventures and Guide Service in Florence, S.C., loves to target redbreast in both Carolinas. He splits his time between one-man boats with foot-controlled trolling motors and an aluminum johnboat, and he often “motherships” his Warrior one-man boats with his johnboat, deploying the smaller craft when finding smaller creeks and streams to venture up.

The Lumber River is one body of water Freeman favors for redbreasts. Its headwaters are along the border between Hoke and Scotland counties in North Carolina’s Sandhills, and it flows for 133 miles, through Robeson County into South Carolina, where it joins the Little Pee Dee River on its trip to Winyah Bay and the Atlantic Ocean.

“Lumber River State Park has good access, and just upriver from the landing on State Park Road — where the river makes a 90-degree turn — there’s a section of water that juts out, forming kind of a pond,” he said. “That’s a great spot to look for redbreasts. These fish like moving water, and even though that little pond is out of the main current, the water still moves in there enough. They get a break from the strongest current and can make beds in there.”

“If you get on the water after a day or two of rainy weather, you’ll find lots of runoff trickling in here,” he said. “That runoff pushes insects and worms into the river and the redbreasts will gang up at those spots. That really happens all up and down this river, but this is a good place you can fish out of the main current and still catch plenty of redbreasts.”

Freeman said the stretch between the state park and the Tar Landing at the Lumber River Campground, which is on the opposite side of the river from the state park, is full of similar areas.

“Every time there’s a 90-degree bend — and there’s a lot of them in this stretch — you’ll find little juts of calm water near the banks,” he said. “Some of them are big pockets. Those areas are gold for catching redbreasts. It’s just calmer than the main river. Redbreasts love those areas. It gives them easy access to the main river and the calmer pockets. And there’s an eddy line of water where that main current meets the calmer water. Oh man, that slight turmoil created when those waters meet has bugs and insects all tumbling around,’ he said.

“The Pee Dee River has lots of cuts along the banks, but not many sharp bends. But it does have an oxbow below Blewett Falls, with a small creek emptying into it. That’s Island Creek, and you can get up in there with a small boat and really slay them. Hitchcock Creek is on the other side of the river and has lots of small fingers off of it.

Freeman (843-409-9162) said if any “top secret” exists for catching redbreasts, it’s for anglers to fish areas where foam and debris are gathered on any of these rivers. 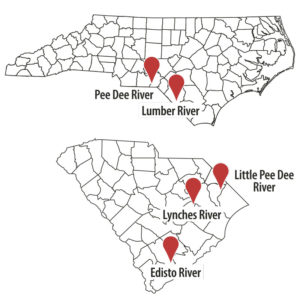 “You’ll mostly find this at the sharp bends in all these rivers. And many are off of the main river in those little pockets,” he said. “When debris gathers up, it’ll create this white foam on top. It’s not a pretty sight at all. Leaves, sticks, even trash like plastic bottles and such will gather up in a big pile, floating on top of the water. Most people avoid it because it’s just ugly. But redbreasts love to get under that stuff. When I see one of those, I fish it hard.”

Live bait under cork is a good bet

As much as Freeman likes fishing these spots, he said it can be difficult. Casting spinners doesn’t work because they’ll get stuck on top of the debris. The best approach here is live bait under a cork.

“I cast upcurrent of the foam. The water carries the cork to the foam and stops it, but your bait gets swept under the foam. This is deadly. You can limit out in short order on just a few pockets with foam like this. But I normally just catch a few like this and move on,” he said.

And one reason he doesn’t load up in these holes is because he enjoys catching these fish in other ways.

Cast what you want, but keep it close to cover

Guide Brandon Freeman uses 4-pound Slime Line monofilament and a No. 4 or No. 6 hook when using live bait to target redbreast sunfish. Crickets are his favorite live bait, but he said any kind of worm will work. Small, live crawdads are unbeatable, he said, but not as easy to find as other baits.

“When cleaning these fish, I often check their stomach just to see what they’re eating,” he said. “Most of them are crammed full of small crawdads. They’ll have 8, 10, a dozen in them sometimes — and the crawdads are still whole. You can put out traps and catch them, but honestly, it’s just easier to use crickets, and they bite them just fine.”

But nothing beats the fun of catching these fish on small lures, Freeman said.

“With an ultralight rod and reel and small spinning lures like Beetle Spins, Mepps spinners, Road Runners and Hoopee Hookers, it’s a lot like bass spinning with a spinnerbait,” he said. “Small crankbaits like Rebel’s Wee Craw and Wee Crickhopper are a lot of fun, too.”

Whatever you’re using for bait or lures, Freeman said it’s important to fish them close to cover — the closer the better.

Getting hung up is part of the game

“I swear, I hooked a log really deep with a Wee Craw one time, and a redbreast grabbed it and took off,” he said. “You’re wasting your time if you’re fishing in open water. These fish are tight to tree stumps, the base of standing trees, piles of debris and sunken logs. A lot of folks avoid that stuff because they don’t want to get hung up. But if you’re not getting hung up from time to time, then you’re not fishing close enough to catch redbreasts,” he said.

Freeman likes to use lures in dull brown or dark red patterns, and he also uses white or chartreuse lures. He switches back and forth between the dark and bright colors throughout the day unless one is working particularly better than the other.

“With ultralight gear, you won’t find a better fighting fish,” he said. “And you don’t need a big boat or fancy gear to catch them. I fish for everything from small rivers to offshore in my guide business, and to me, you just can’t beat redbreast fishing.”

Topwater trout in the Pamlico Sound

Teresa McCullough caught this nice 23.25″ speckled trout on topwater around Wade’s Point in the Pamlico Sound on Aug. 23 using a Heddon Spook Jr. Trout color using the walk the dog style. The trout […]

With a live worm and her favorite cane pole, Lynda Davidson, 73-years-young, caught this bass out of a farm pond in Moore County, N.C. Great catch!

About Brian Cope 1667 Articles
Brian Cope is the editor of CarolinaSportsman.com. He has won numerous awards for his writing, photography, and videography. He is a retired Air Force combat communications technician, and has a B.A. in English Literature from the University of South Carolina. You can reach him at brianc@sportsmannetwork.com.
Website

Sorry. No data so far.