Kevin Davis, a guide who owns Blacks Camp on the Diversion Canal between Lake Moultrie and Lake Marion, said that the fishing from mid-June through July will remain outstanding in the shallows for both species.

“The largemouth bass action will be excellent in shallow water. But not in the same places we caught them in the spring,” he said. “The key to shallow-water success now will be to fish the thickest vegetative cover you can find.”

Davis said anglers must find the bass-rich, shallow areas and focus their efforts on those targets. Search slightly deeper water than during the prespawn and spawn periods that has gnarly cover. Search for concentrations of bass in the 4- to 7-foot depth range.

Davis (843-753-2231) will focus his efforts primarily around and in heavy cover throughout most of the day. But low-light conditions offer other opportunities.

“Very early and late in the day, there will be a flurry of topwater action where bass may roam away from the dense weeds to feed,” he said. “Also, throughout the day, good numbers of bass can be caught, and a reasonable opportunity for hooking bigger fish exists. Trophies are not caught as frequently as during spring, of course. But 7-pound-plus fish are often caught — and an occasional huge bass as well.”

Casting ability also makes a big difference in this type of fishing. The prime target zone is usually quite small, especially for quality fish. Also, good bass action will occur on ledges that drop from 5- to 15-foot depths using soft plastics and deep-diving crankbaits.

Bream and shellcrackers are caught on both lakes throughout July. But they are typically bunched up in specific areas unless they’re bedding.

“Many bream fishermen think the bedding season is over by July. But that’s absolutely not the case,” Davis said. “Bream are still caught in big numbers and sizes on the beds during July. But the prime time is generally about three days either side of the full moon. In May and June, we’ll find bream bedding on the dark moon, too. But not as much in July.”

Steve Pack out of Packs Landing in upper Lake Marion said bream will often shift prime bedding sites away from shoreline shallows to 3- to 5-foot depths in open water. The bottom must be sandy, not mucky, for bream to bed in open water. Fishermen with side-scan sonar capability can work sandy bottoms and often find beds far from the shoreline.

When bream are not bedding, look for them to be scattered around weedy cover and cypress trees. Pack said the large areas of trees in the upper end of Lake Marion provide plenty of fishing opportunity his time of the year.

Pack (803- 452-5514) said fishermen can get back into the trees and fish crickets or red worms around trees, stumps, logs and weeds until they work out the pattern for the day.

“Usually, multiple bream will be caught in a confined area even when not bedding,” he said. “But limits of quality bream are still taken during the summer and fishing back in the trees does moderate the bright sun,” he said. 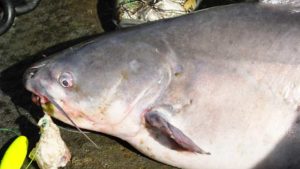 The “sunset clause” lapse that caused the 2014 blue catfish regulations to be repealed last summer was not reinstated by South Carolina’s General Assembly during the 2019 session.

According to Chad Holbrook, a fisheries biologist for the S.C. Department of Natural Resources whose responsibilities include the Santee Cooper lakes, the catfish bill was introduced and assigned to a committee but did not make it out of the committee. The 2019 legislative period was the first year in the legislature’s two-year session. So the bill introduced during the spring of 2019 will still be active and available for consideration when the legislation re-convenes in January 2020.

Holbrook said when the regulations digest is printed this summer, it will list no creel limit on blue catfish for Santee Cooper, with only one fish longer than 36 inches allowed in that creel. That’s the wording from the previous regulation, enacted in 2007, that the 2014 law replaced. The 2014 law stipulated a creel limit of 25 fish per angler with only two per day over 32 inches. With the 2014 law repealed, the regulation automatically reverted to the previous law.

Click here for tips on catching more Santee bream in the summer.

Opening weekend of South Carolina’s gator season was a wild one for four Florence, S.C. friends, who killed a massive gator on a late-night hunt. […]

Hunting guide Buck Koon got a bit of a scare earlier this week when a harvested 9-foot Santee gator clamped its mouth shut on his hand. […]

Darlington S.C.’s Charlie Weatherford caught his biggest catfish yet, an 84-pound Arkansas blue while fishing at Santee on Sept. 13, 2020. […]