The deer was a frequent trail cam visitor, but Threadgill had never seen the deer in the flesh until the day he killed it. His brothers and dad had also hunted the deer during the season, and none of them had encountered it either.

“Studying the trail cam pics, we thought we had nailed down his core area, an oak ridge covered in holly trees with a lot of blown down trees. Due to the inclement weather for the duration of the season (and with our father’s blessing), we decided the only way to kill this deer was a strategic push,” said Threadgill’s brother Daniel.

With the end of the season fast approaching, the Threadgills decided to try the man drive on Dec. 30.

“I came in from the top of the hill while my dad and two brothers cut off his escape routes. As I entered the thicket, all our hearts raced. I texted “this could happen boys, it looks right in here,” said Daniel.

And he was right

The plan worked, and quickly. Not long into Daniel’s push, the 31-point buck headed Jason’s way.

“As I zigzagged the hillside, shots rang out in the bottom,” he said of hearing his brother shoot four times. 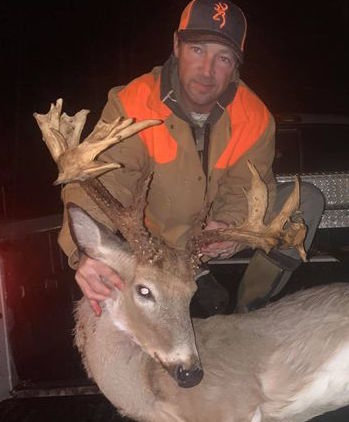 Jason said at first, he wasn’t sure if the buck was approaching, or if it was his brother.

“His eyes were fixed on the hollies, and movement caught his eye. But he couldn’t tell what it was at first and thought it could be me. The deer had snuck to the end of the hollies and stopped. Suddenly, the deer breaks out running. Instantly, the weight of the situation hit Jason,” said Daniel.

“The first shot was a miss, and now the buck knows he’s being shot at and picks up the pace. Shots two and three don’t find the mark either. But the fourth shot slams the deer in the neck, bringing him down instantly,” he said.

As the hunters gathered, shouts of excitement and disbelief filled the air. They had all dreamed of what the deer would look like in person. And now, before their eyes was this buck they’d named The Freak.

“The Freak is one name we gave him. The other was the Gate Keeper because he looked downright scary in those nighttime photos. The deer was run down from the rut. He had a sore on his brisket and poop stains down his belly from breeding so many does,” he said.

Congratulations to Threadgill, who is now entered in our Bag-A-Buck contest. This makes him eligible for a number of great prizes. That includes the grand prize, a two-day, two-man hunt at Cherokee Run Hunting Lodge. Click here to view the Bag-A-Buck gallery or to enter the contest yourself.

I killed this 11-point non-typical buck in Caswell County on Nov. 8, 2020. The left side of the deer’s rack splits off into two different beams. He also has several kickers coming off the main […]

About Brian Cope 1742 Articles
Brian Cope is the editor of CarolinaSportsman.com. He has won numerous awards for his writing, photography, and videography. He is a retired Air Force combat communications technician, and has a B.A. in English Literature from the University of South Carolina. You can reach him at brianc@sportsmannetwork.com.
Website