What does the data from trophy trout catches tell us about these factors?

Solunar. Despite being a simple keyword search, neither Google nor “Alexa” can describe its impact to the inshore angling world. Perhaps, it’s because it deals with the sun, space, planets, gravity and a majority of other “nerdy” things I tuned out of while in my high-school science classes. As it turns out, it’s pretty important. Actually it’s really important when it comes to trophy trout. And here’s why.

As the son of a fanatical trout fisherman, one thing I was quick to discard was the Solunar rating: the days it predicted as the best. Instead, I learned that productivity directly centered on moon phases and was a great precursor to success on the water. Often, Solunar ratings leading up to a full or a new moon would be abysmal. However, we would still launch the boat and have great success on numbers of fish. Additionally, we would fish days rated as stellar, not associated with an optimal moon phase, and we would struggle to catch a handful of fish.

So why does this matter? The longer I’ve pursued and studied trophy class trout, the less I’ve seen a correlation with certain moon phases. Don’t get me wrong, it’s important. Moon phase is a direct contributor. But the more I study trophy trout catch data, the broader that scope becomes.

Here’s what I mean. Speckled Truth runs Dirty 30 and Trophy Trout citation programs and captures catch data for trout 27 inches or longer across nine states. In Texas alone, 71 Trophy Trout citations have been registered since Oct. 1, 2018. And part of registering is divulging the day a huge speck was caught. In this particular instance, I grouped Dates of Catch (DOC) in one of four quarters. For example, the first quarter was the 1st through the 7th. The second was the 8th through the 15th. Third quarter was the 16th through the 22nd, and fourth quarter is the 23rd through the End of the Month (EOM).

I divided months in four pieces to give me a good indication of higher periods of production. For example, Pre New Moon would accurately be reflected by catches happening during the first quarter. Post New Moon/Pre Full Moon would coincide with second quarter, Pre Full Moon with the third and Post Full/Pre New with the fourth quarter. 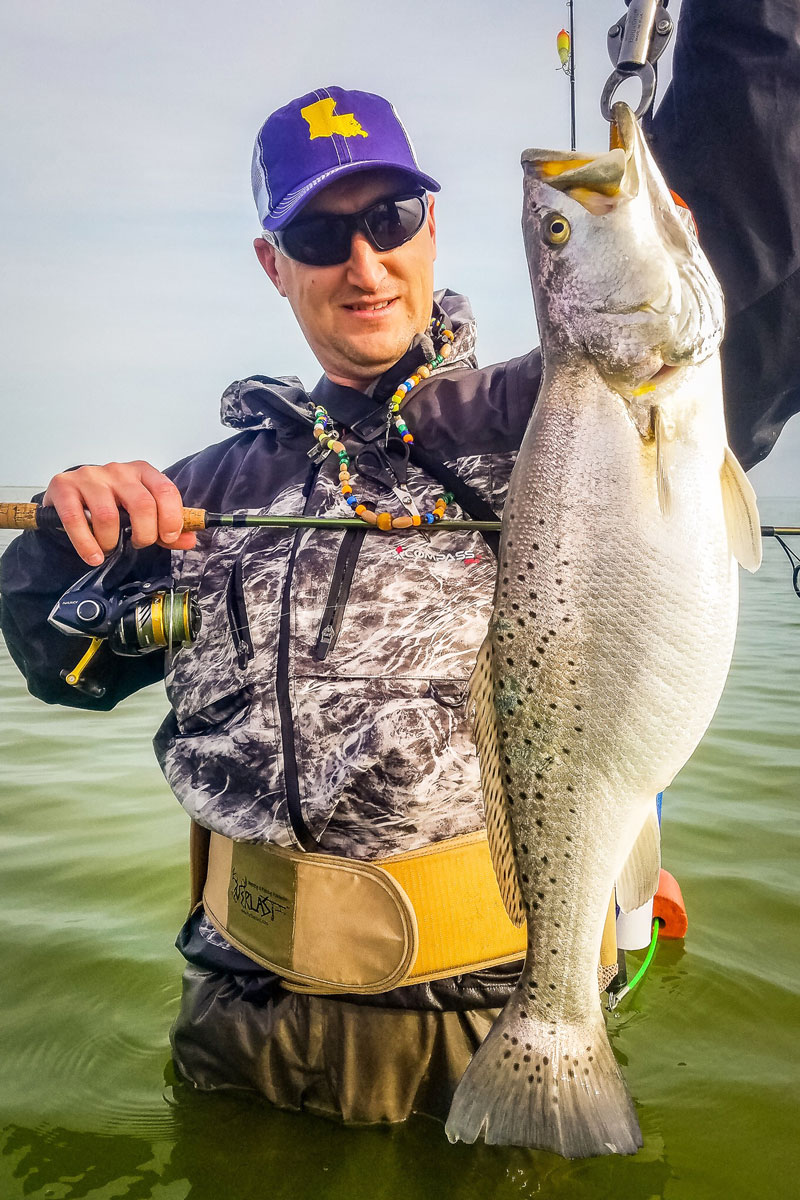 What does that tell me? First, we have a very small but maturing data set. However, what it suggests, which we hope to validate over the course of time, is that big fish aren’t as predictable to moon phase as I initially thought.

Far too often I hear, “The week before the full moon is your best chance at catching a trophy.” While I won’t dispute that theory based on my own successes, my aperture is far wider now than it once was. Therein lies the importance of Solunar.

The Solunar theory is actually a pretty old concept. Hypothesized by John Alden Knight back in 1926, the theory centered on “fish and animal movement based on the location of the moon and their bodies.” Starting with more than 30 factors, Mr. Knight kept only three to provide ground truth to his concept: the sun, moon and the tide, the latter for tidal waters. After years of study and refinement, Solunar charts accompany most, if not all, outdoor journals.

The idea is that moon overhead and moon underfoot can attribute to feeding behavior just as much as sunrise and sunset. Of course, these gravitational effects have impact on tide. But not all inshore estuaries have tidally influenced water. For example, the infamous Baffin Bay in Texas has almost no tidal influence. Additionally, East Matagorda Bay as well as the Lower Laguna Madre near Port Mansfield have very little tidal influence. However, if you examine both lists, 87 of the 118 total entries, 74 percent, came from estuaries with extremely limited water movement.

What does that tell me as an angler? Big-fish feeding behavior is more closely related to Solunar times, the major and minor feeding periods, rather than moon phase. In other words, if your life-long goal is to catch a giant trout, statistically, your odds are better fishing higher-rated days based on the Solunar versus a certain moon phase. But that’s under the presumption you’re fishing high-potential water, a different conversation for another time.

Anyway, let’s hope this information is helpful and at least gets the wheels turning to maybe explore the subtle nuances of targeting these big bites.

Solunar tables predict fish and wildlife feeding behavior based on the location of the moon. When it’s overhead and underfoot, you’re more likely to run into a big speckled trout. So keep an eye on those major and minor feeding periods.

Click here for information on topwater fishing for speckled trout.

Follow these tips from Capt. Charlie Thomason on using double rigs for speckled trout, and you’ll put more fish in the boat. […]

Despite some unseasonably cool weather for mid June, the SC saltwater fishing report is a hot one. […]