How does a fish that seems to be slightly undersized quickly become legal? The same way that what appears to be an upper slot-sized fish quickly becomes against the law to keep — with the pinch of a tail. This is a crucial step that many anglers fail to perform when checking the size of their catch. And it could cost you big time.

The majority of anglers follow the rules, or at least they try to. But some don’t know that the proper way of measuring a fish — according to the N.C. Wildlife Resources Commission, N.C. Division of Marine Fisheries and S.C. Department of Natural Resources — is to place a closed-mouth fish on a ruler at the “0” mark, then pinch the fish’s tail. If any part of the tail fails to reach the minimum length — or exceeds the maximum length — for that species, it must be released.

So while that 13 3/4-inch black drum you just caught may break your heart at first glance, it’s probably a 14-inch keeper (in both states) once you pinch its tail. On the same note, that big redfish you reeled in that’s got you mentally sharpening your filet knife and heating up some canola oil? It just might stretch past the legal length when you give its tail a squeeze.

Wildlife officers and members of the marine patrol warn against anglers using flexible rulers, such as those used for sewing. These rulers, which bend at every lump and hump in a fish’s body, can give false readings. They can make a fish appear longer than it is when properly measured. Some anglers mistakenly run these tapes from a fish’s mouth, over the dorsal fin of its body, then to the tail while keeping the tape tight to the fish the whole time. This is definitely the wrong way to measure a fish. And it will surely result in a measurement that is longer than the fish actually is.

Stick on a decal

Both states’ wildlife and marine fisheries agencies provide measuring decals with the different minimum/maximum size limits for various species printed on them. Just make sure you apply the decal on a flat part of your boat or cooler. Putting one on a curved section will distort its true measuring accuracy. These rulers can also be accidentally stretched while applying and can shrink in sunlight before being stuck in place.

Fish-measuring boards like the Golden Rule and the Hawg Trough, available at a variety of outdoor stores, are the most-accurate means of measuring your fish. They have a 90-degree bend at the 0 mark. This allows you to easily put the fish’s mouth at the correct starting point, freeing your eyes to focus on reading the number at the pinched tail.

The regulation guides from both North Carolina and South Carolina plainly state the proper way to measure a fish.

SCDNR’s manual is a little more wordy, but also a little more informative of the manner in which game wardens from both states will hold anglers to. It says to measure a fish “from the closed mouth (snout) to the tip of the tail fin when pinched together. It is a straight line measurement, not over the curvature of the body.” 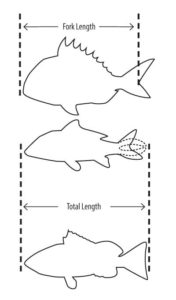 ‘Fork length’ and how it’s measured:

Some saltwater fish, mainly offshore species, are measured by fork length instead of total length. This measurement is to offset the disproportionately long tails that some offshore species can grow, even among the same species of fish in the same body size. It also simplifies measuring some fish whose tips of their tails can grow like fine strands of hair as much as several feet long.

To get a fork-length measurement, place the fish on a ruler with its closed mouth at the “0” mark. Then check the number at the inside fork of the fish’s tail. That number is the fish’s fork length. Pinching the tail is not required when measuring a fish for fork length.

From the S.C. Department of Natural Resources’ manual: “To obtain fork length, measure from the tip of the closed mouth (snout) to the center of the fork of the tail. It is a straight-line measurement, not over the curvature of the body.”

It’s worth noting that many anglers believe that fish, especially when placed on ice, can shrink slightly. It’s also worth noting that a game warden will use his own official measuring device, which may be more accurate than yours. For those reasons, if your measurement is too close for comfort, it’s best to toss the fish back in. It’s not worth the fine, and it frees up space in your cooler for a bigger fish.

After a lengthy hiatus due to COVID-19, SCDNR will resume in-person transactions beginning Monday July 6, 2020. […]

What’s it like to be an N.C. game warden?

If you’ve ever wondered what it’s like to be a North Carolina game warden, this clip will give you a small preview. […]

List of N.C. boat ramps that are currently closed

About a dozen NC boat ramps are currently closed for various reasons. Find out if your favorite one is open or not. […]

About Brian Cope 1604 Articles
Brian Cope is the editor of CarolinaSportsman.com. He has won numerous awards for his writing, photography, and videography. He is a retired Air Force combat communications technician, and has a B.A. in English Literature from the University of South Carolina. He can be reached at brianc@sportsmannetwork.com.
Website