Kayaks are the way to go when hunting for spawning sunfish

In the angling community, it’s no secret that bream and shellcrackers are easiest to catch during the spawning season surrounding the full moons in April and May.

The ability to find a bream bed is an innate ability in some anglers. Ask an older angler — because the old guys are always the first to find bream beds — and you’ll most likely get a somewhat vague answer like “Follow your nose.”

J.D. Desrosiers of Greer, S.C., prefers to follow the nose of his Bonafide kayak when finding bream beds. Desrosiers didn’t say if being closer to the water in a plastic boat helps him smell bream beds, but it does have other benefits.

“A lot of folks are on the water looking for bream beds this time of year,” he said. “Bream fishing from a kayak helps me get into areas other anglers can’t get to. I can recount a bunch of times I’ve slid over a sandbar in only inches of water in a swamp or back of a creek and found untouched fishing grounds.”

The other bream-centric predictor of better fishing is moon phase. If Desrosiers is planning a trip out of town to go bream fishing, he’s most likely going to plan around fishing the full moon or new moon from April through September. Otherwise, if he’s fishing a local river or in his backyard on Lake Cunningham, he’ll go whenever the opportunity arises.

Desrosiers prefers to fish lakes with weeds, grass or other aquatic vegetation, especially areas with a sandy bottom. His choice of tackle is consistent with bream fishing in general, nothing different because he’s in a kayak. A 5-foot, ultralight spinning outfit paired with 4-pound monofilament is his No. 1 choice; he can fish a variety of live or artificial baits. His close second choice is a 4-weight fly rod with floating line, a light tippet and a variety of bream-sized popping bugs.

“I will use everything I can when it comes to bream fishing,” he said. “One of my favorite rigs is a weighted bobber with a small hook underneath. That’s a killer tactic with either red worms or crickets. I’ll also cast a lot of artificial baits like Rooster Tails, Beetle Spins, and small crankbaits ­— all the usual stuff.”

Desrosiers approaches bream fishing in ponds and reservoirs on a systematic basis. He will visually scan an area, focusing on weed lines, cypress trees or riprap, and then begins fishing. If he’s catching small bream, he’ll pull anchor or raise his Power Pole micro and back off to deeper water, where he often finds larger fish.

“One thing I’ve learned is to play the drag on your reel,” he said. “Some anglers set their drag loose when bream fishing because the fish tend to be small, but a big bream will make a hard run and pull drag quickly. I’m talking about pound to 2-pound fish; they’ll get you in heavy cover in a heartbeat, and you risk losing the fish. That’s when you need to tighten it up a notch or two.”

Talk about planning a fishing trip for bream, and most anglers conjure up the image of a farm pond tucked on the backside of a pasture or the back corner of a cove in a lake or reservoir. Few people think about fishing for bream in a river.

J.D. Desrosiers of Greer, S.C., a member of the Yak Attack pro staff,  said river fishing for bream and shellcrackers might be one of the most-overlooked fishing opportunities to be found, particularly during May.

“I’ve seen some big bream come out of a river,” he said. “A couple of years ago I saw a 2.96(-pound fish) come out of the Congaree River above Sparkleberry.”

Desrosiers said the best place to look for panfish in any river, big or small, is a deep pocket. A slow-moving, deep hole with bluish-green water is a great place to work a Rooster Tail.

“I might be giving up a secret, but I love natural-colored Rooster Tails,” he said. “Something in a black minnow or brown is my favorite. A lot of folks use white or bright colors, but I don’t like them in a river. I want something more subtle.”

Desrosiers recommends a 1/16-ounce bait in slow-moving current or he might move up to a 1/8-ounce in moderate flow. He casts across the pool, let the Rooster Tail sink and then rips it back diagonally to the current so the blade flashes without imparting a lot of speed to the bait.

Other good bream hideaways are any blowdowns or rock outcroppings that affords a current break for fish to hold and dart out to attack prey. 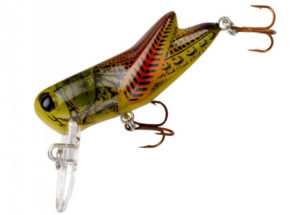 The Rebel Crickhopper is a big bite for summer and fall bass, trout and other fish. The most-realistic grasshopper crankbait you can find, the Crickhopper, is a tremendous lure when twitched at the surface, but for anglers targeting trout, a straight, medium retrieve is effective in tailraces or lakes. The bait’s profile and realistic paint jobs accurately mimic a real grasshopper. It can be used as a topwater or a crankbait and is a realistic grasshopper imitator and great multi-species lure.

For bream or bluegill, it can be fished using ultralight spinning tackle with 4- to  6-pound monofilament. When fishing bream beds or shallow flats, cast next to overhanging trees or bushes. Once the lure lands, don’t immediately begin the retrieve, but impart short, erratic movements to the bait with twitches of the rod tip. It’s best to twitch the bait a couple of times without moving it too far from the cover.

It’s not uncommon for bedding bream or bluegills to watch and wait for up to a minute or more, before deciding to bite.

MSRP for both models is $5.99. More information and availability at https://www.rebellures.comrebel-crickhopper-fishing-lure 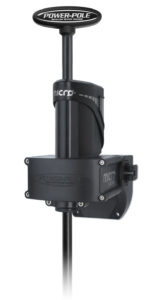 When you’re getting up close and personal on the water in your small vessel, there’s nothing better to have on-board than the Power-Pole Micro.  This little anchor system offers up big stopping power with a silent and secure hold. The all-electric Micro is compact and designed to deliver while you’re fishing in your small craft.

A Power-Pole Micro will hold john boats and small skiffs up to 1,500 pounds — including passengers — perfect for kayaks and paddleboards. The Micro driver unit is easily-removable, making storage or transfer simple.

It also includes an adjustable mounting bracket with other mounting options available. The anchoring system includes a 15-foot power cable for a 12-volt battery The Micro driver unit accommodates any 3/4-inch spike.

Sign Up Now
About Phillip Gentry 768 Articles
Phillip Gentry of Greenville, S.C., is host of “Upstate Outdoors,” a weekly radio show that can be heard on Saturdays at noon on WORD 106.3 FM.