One way or another, whether we like it or not, changes are coming to the dolphin fishery that we experience off the Carolina coast. Since 2012, I have served as a member of the Dolphin/Wahoo Advisory Panel for the South Atlantic Marine Fishery Council.

I originally got involved in serving in this capacity when a proposal surfaced in 2010/2011 to reduce the limit on wahoo from two fish per person, per day, to two fish per vessel, per day. Many others were outraged by this idea, which I believe would have had a devastating effect on the livelihoods of charter boat captains in both North and South Carolina, not to mention how it would affect recreational anglers who liked to fish offshore.

At the time, ample public input on the matter was enough to stave off any needless changes to the limits. In this case, the system worked to benefit the best interest of the public, or at the very least, the public who loved to fish.

Following that debate, I decided that I could be more involved in fisheries management, as a stakeholder who wasn’t afraid to speak my mind and look at the data and issues presented. Ten years later, I am currently the chair of the Dolphin/Wahoo Advisory Panel. That means I presented the results of the last Advisory Panel meeting to the actual Council in June.

At the end of April, I had the privilege of attending that Advisory Panel meeting in Charleston. Of all the meetings I have attended, this was easily the stickiest. When major changes are on the table, emotions can often run high. To sum it up, two proposed major concepts could potentially impact dolphin fishing in the Carolinas. 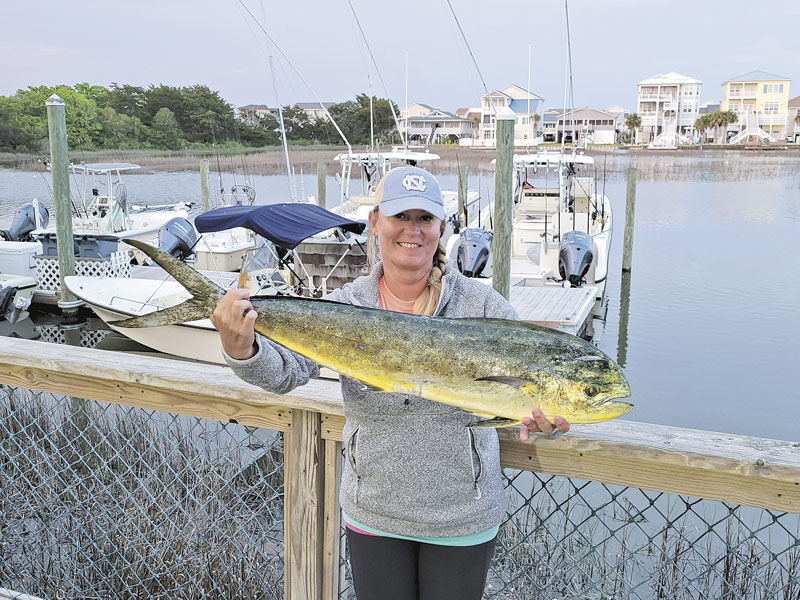 The first is an extension of the 20-inch minimum size on dolphinfish from where it currently ends, at the border of North and South Carolina, potentially to every state on the East Coast, the most important being North Carolina. I’ll explain why this is of such importance shortly. Second, the Council is looking at a few different ways to potentially reduce the bag limits on dolphin, either for the individual or the vessel.

North Carolina is a vital data point for the dolphin fishery. Almost 80% of dolphin harvested on the U.S. East Coast are landed in either Florida (approximately 65%) or North Carolina (approximately 23%). Lately, dolphin are being caught as far north as Maine. So a mere two states out of fourteen essentially control the landings data for dolphin.

Florida, which has had a 20-inch minimum size on dolphin caught in federal waters since 2004, reports nearly three times what is caught in North Carolina. But bear in mind, quite a few more boats are registered in Florida than North Carolina. Plus, South Florida’s proximity to the Gulf Stream means more access to these fish for Floridians than for anglers in the Tarheel State.

Expanding the size limit north may be well-intentioned. But I think it would do far more harm to charter boat anglers and the recreational experience in general than it would result in a benefit to the dolphin population.

North Carolina charter boats and a good many recreational anglers target smaller dolphinfish later in summer when they are prolific. And the biggest numbers of large gaffers are well to the north of us. This is the bread and butter of the charter fleet at the Outer Banks in July and August.

Many anglers who book charter trips come from out of state and with the expressed desire to bring home some meat. This is their access to fresh seafood and the fishery. More restrictive measures on what they can bring home will almost certainly mean reduced bookings. This in turn hurts hotels, restaurants, and other businesses in a tourism-based economy.

Culling not the answer

Secondly, restrictions on the size will mean released fish to find larger fish to put in the box. And not a lot is known about the mortality rate of released dolphin.

In general, dolphin have a mortality rate of more than 99% in their first year of life. They grow fast on average. And certain studies have shown that they can spawn when they reach 18 inches. The practice of “culling” through dolphin to get to the right-sized ones, by this author’s reasoning, could potentially kill more fish in the population than it preserves.

Better to keep the first ones you catch than to hook, land, and release greater numbers of them, potentially returning them to the ocean damaged and tired, now easy targets for any predator, including larger dolphin.

Regarding the concept of bag limits, the waters get even murkier. It’s important to note that the first group to impose any kind of bag limit at all on dolphin in the United States was not any kind of government entity, but the charter boat fleet at Hatteras Island.

Before the dolphin stock came under any kind of federal management program, captains on the Outer Banks self-imposed a limit of 10 fish/per person/per day that served two ends. Not only did it help conserve the stock, but it kept boats from showing off with unnecessary catches that were often wasted. This is where the limit on dolphin caught in federal waters can be traced. And now that same lineage of fisherman is in danger of facing tighter regulations, when it is them that will be hurt the most.

I think a greater problem faces the dolphin stock and the recreational fishery for dolphin in the present. In the past dozen years or so, commercial fishermen who specialized in catching bottomfish have been either forced out of their fishery or limited to an extent that their efforts are no longer profitable.

Boats that longline for swordfish, tuna, and sharks are required to have Highly Migratory Species (HMS) permits, which require a tremendous investment. But access is wide open to the commercial fishery for dolphin.

With basic longline gear, a basic commercial license, and a $50 operator’s card (which will soon not even be needed) anyone can longline dolphin. The appeal of this practice is such that it is hard to find a weedline in May that doesn’t have longline gear set next to it. Consistent good gaffer fishing has suffered. And this has hurt the charter industry the hardest, all while removing the best spawning fish from the ocean indiscriminately.

Recreational anglers in center consoles are seeing fewer productive days as well. In 2015, for the first time in history, the commercial Annual Catch Limit for dolphin was met in June, which ended that fishery for the year. Subsequent years have come close to the same levels. As stated before, times are changing.

In my eyes, the solution is simple. Restrict longlining for dolphin to those boats who possess HMS permits. Those who aren’t HMS permitted and wish to fish for them commercially can still do so, but must use rod and reel tackle, just like recreational/charter boat anglers.

A limited and regulated longline fishery won’t hurt the stocks of these fish or the recreational fishery. But having it accessible to too many boats certainly can. I am hopeful that this solution, or something close to it, will be adopted, rather than imposing more restrictions on a historic fishery in North Carolina.

Jerry Dilsaver Columns, Cooking on the Wild Side, Snapper

For a tasty and refreshing meal on a hot summer evening, try this avocado pineapple grilled snapper recipe. […]

Anglers working the nightshift can catch catfish all night long on these Carolina lakes. […]