North Carolina hunters have several million acres of public lands at their fingertips. Carolina Sportsman profiles the ones they should take a long look at, by species.

With a growing human population of 11 million, North Carolina is changing from a rural state where access for hunting and fishing once was easy but now is shrinking.

So the value of public land where citizens may hunt, fish, hike, camp, photograph or watch wildlife increases daily.

Public areas where citizens may engage in these activities are called game lands. Statewide, they total 2.1 million acres and are managed by the N.C. Wildlife Resources Commission.

Meanwhile, 322,000 North Carolina residents own hunting licenses, and 25,000 non-residents visit the state to hunt. The total number of fishermen is around 1.525 million. Together, they spend $2 billion annually for their pasttimes, each expecting some bang for their outdoors bucks. Most don’t own private property. So game lands are left to supply these needs.

The following details some of North Carolina’s valuable game lands to outdoorsmen:

The bucks stop here, as far as public lands play out

Game-lands comparisons are difficult when considering access, whitetail numbers and hunting success. Hunting habitats are as different across the state as a sand dollar and a freshwater clam.

There’s little question that the Macon County section of the Nantahala National Forest, is the best public-hunting area for deer in the western third of North Carolina.

“The Macon Ranger District has lots of wildlife openings including logging roads, power lines and openings at higher and lower elevations, sanctuaries and wilderness areas” said David Stewart, a biologist with the N.C. Wildlife Resources Commission.

These two game lands are mirror images, with good deer populations and large reservoirs at their centers. Together they cover approximately 26,000 acres just north and south of the Raleigh-Durham area, respectively.

Annual deer kills at the two game lands have tracked evenly for years.

“Both game lands are excellent for deer,” said biologist Chris Baranski of the N.C. Wildlife Resources Commission. “Hunters shouldn’t have any trouble (finding whitetails). Everything is developed except the game lands, so deer concentrate inside a large expanse of undeveloped land.”

The Croatan National Forest in Carteret, Craven and Jones counties in eastern North Carolinay offers a different experience with its pocosins, swamps and forests.

Last season, hunters tagged 331 deer on the national forest’s 162,247 acres, an increase of better than 20% over the previous season.

Wildlife food plots include oats and rye near Pelletier and Long Point Landing. The Croatan has white oak ridges near the Havelock ferry terminal and large drainage areas reachable by boat at Bryce’s Creek and the White Oak River.

“Some of the biggest whitetail bucks in eastern North Carolina are killed (here) each season,” Clark said. “Most come out of Jones and Craven.”

The sprawling Nantahala and Pisgah national forests, with more than a million acres between them, provide bear hunters with plenty of land to roam. Last season, hunters killed 550 bears on North Carolina public-hunting tracts in the western third of the state, out of a total area harvest of 1,290.

“Nantahala and Pisgah game lands are popular places for bear hunting,” Stewart said. “A good number of hunters hunt bears with dogs. Most hunters know where bear sanctuaries are because they’ve been hunting for years. There’s a lot of still-hunting.”

Hunters heading to eastern North Carolina probably should consider hunting in counties with a good population of bears rather than on individual game lands. With the exception of Croatan National Forest, game lands with good bear populations are relatively small.

“Croatan has pocosins and tupelo swamps that cover a large area of the game lands,” said Richie Clark, a Commission biologist, “but it has pretty good road access.”

This 9,953-acre game land contains seven waterfowl impoundments scattered on both sides of Goose Creek in Beaufort and Pamlico counties. The impoundments are sectioned to allow dozens of hunters to enjoy their sport.

Outfall Canal Road leads to Merle Road Loop Impoundment (seven sections, 250 acres) and doesn’t require a permit to hunt. It has a nearby camp site and two parking areas.

“It often attracts ducks, geese and (tundra) swans,” Turner said. “(We) manage it for moist soils and submerged aquatic grasses.

“If it gets windy, birds may fly off the sound. It’s also got potential if you draw a swan permit. I’ve seen surveys that don’t report a black duck or mallard but more swans than ducks.”

This game land covers 228 acres and includes waterfowl blinds that were once private but were donated by Currituck County to the N.C. Wildlife Commission. They dot either side of Currituck Sound’s mainland and the spit of land bounded on the east by the Atlantic Ocean. It’s the first coastal region to see migrating waterfowl fly south.

“These game-land blinds offer hunting for ducks to geese to swans,” Turner said.

The northern section includes Currituck Banks, while the southern blinds are inside Currituck National Wildlife Refuge.

Currituck Banks has two blinds across the sound from on the ocean side at Ships Bay and two mainland blinds, one at Cedar Bay and one at Hog Quarter Landing. Six Currituck NWR blinds are inside the Currituck Marsh Unit and three at the South Marsh Unit.

Hunting is by lottery draw, and individuals should visit www.ncwildlife.org/Licensing/Permit-Hunting-Opportunities.

Small game: habitat is everything 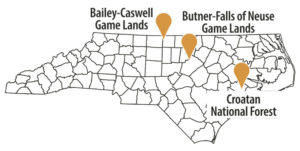 “About 50% of Bailey-Caswell has open hickory and upland hardwoods, so gray squirrel hunting is excellent,” said biologist Baranski, who said the Commission also manages habitat for wildlife at Bailey-Caswell.

“We’ve got a lot of young clear-cuts, tons of acres in dove fields and burn blocks, so rabbit hunting also can be really good,” he said. “We have eight fields planted in brown top and proso millet, corn, sun flowers and buckwheat, covering 190 acres.”

Planted fields and burn blocks offer some quail hunting. The birds can’t be hunted on CURE areas (a quail-restoration project), but rabbit hunting is allowed.

Because these two game lands are near Raleigh, Durham and Chapel Hill, many outdoorsmen visit both to open the year’s first hunting season for doves.

Because of hardwoods on both game lands, hunters shouldn’t have any problem finding squirrels.

“The northern end of Butner-Falls is a good place for rabbits and beagles,” he said. “It has more fields and isn’t too developed. At Jordan, the best rabbit habitats are edges of dove fields.”

“It has a mixed bag of small game,” he said.

Hunting success on rabbits, squirrel and quail varies at Croatan.

“A lot of people hunt rabbits close to the dove fields and at wildlife openings after deer season,” Clark said. “It has former agricultural fields that hold cottontail rabbits and a few swamp rabbits.

“Quail mainly are found at fire-controlled places and transition areas between ridges and swamps.”

The NCWRC is offering free online deer hunting and processing seminars throughout the month of September. […]

Pontoon boats are increasingly being used and recognized as great fishing platforms, with anglers targeting a variety of species from their relative comfort. […]