Deer season opened in North Carolina with the statewide archery season on Sept. 12, and for hunters, things are looking up — for the most part.

Harvests for the past handful of years have been relatively consistent, bouncing between 145,000 and 160,000 deer per season, and Jonathan Shaw, the deer-project leader for the N.C. Wildlife Resources Commission, doesn’t see any big changes coming.

Shaw said that the Commission is still tweaking either-sex seasons in some areas to try and better align them with the peak of the rut — either to allow for a bigger doe harvest in areas that need the herd to be a little smaller, or to lower the doe harvest in places that could use a few more deer.

“We did shift the timing of some doe seasons a couple of years ago, from the end to the beginning of the season, and we continue to evaluate them, and to increase them when we have the opportunity, when we want to stabilize the herd in an area.” 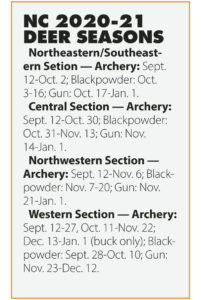 Shaw will be paying careful attention to the deer harvest in the western third of the state, and to the ratio of bucks and does in the harvest — the former, because the herd in western North Carolina is on the increase, and the latter, because the statewide two-buck rule will be in its third season. The western half of the state has had a two-buck limit since 2000; the eastern half has had it for two years.

Unfortunately, on the million-acres in the Pisgah and Nantahala national forests, there’s very little timber management and habitat improvement being done.

As for the two-buck rule, Shaw said that, surprisingly, he’s interested in how it not-only affects the harvest in the eastern half of the state, but the statewide harvest.

“It will take a while to change the buck age structure,” he said. “Year one, you won’t see any change. We have seen a little shift in the buck age structure and the sex ratio in the harvest. This is the first year we’d expect to see a shift. There are statewide implications, because a lot of hunters will travel statewide. Remarkably, one of the things we’ve seen has a been a real decline in the button buck harvest. I expect that limiting the buck harvest will have an impact.”

“I think 2014 was the last year we had a really good mast crop, and a really low harvest,” he said. “But I can’t recall another year when we’ve had a really big swing, and I haven’t seen anything this year about the mast crop.”

Flounder season ends for NC anglers on Sept. 30, but that’s not slowing down the bite one bit. […]

Do you know the baiting and hunting laws for dove season? This guide will help. […]

About Dan Kibler 840 Articles
Dan Kibler is managing editor of Carolina Sportsman Magazine. If every fish were a redfish and every big-game animal a wild turkey, he wouldn’t ever complain. His writing and photography skills have earned him numerous awards throughout his career.